Funerals for senior royals since World War II have tended to be very public affairs, with pomp, pageantry and popular fervour 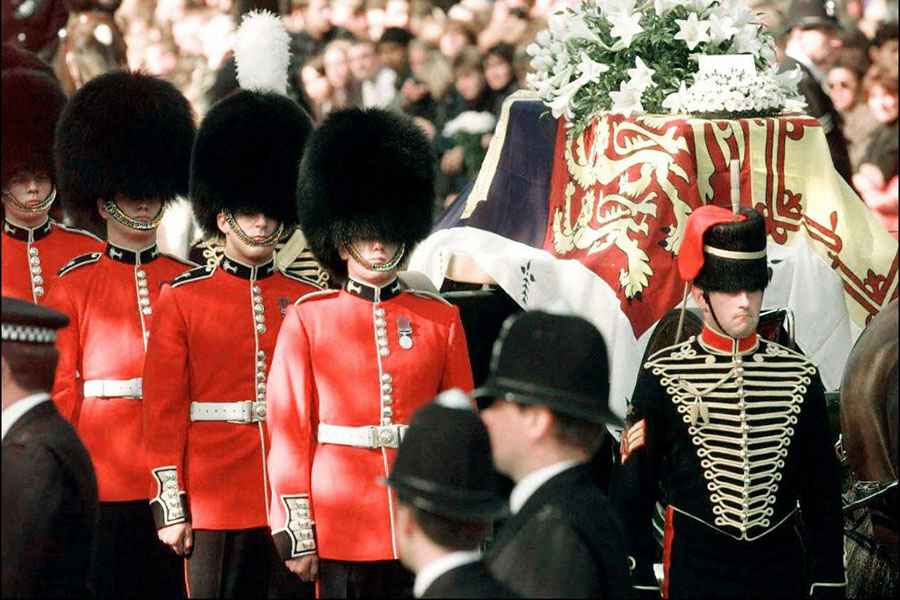 (File) The coffin of Diana, Princess of Wales, laid on a gun carriage and flanked by the bearer of Welsh Guardsman is lead to Westminster Abbey 06 September. (ELECTRONIC IMAGE) Image: Thomas Coex / AFP

Queen Elizabeth II's on Monday will be no exception.

At his funeral on February 15, his coffin was carried to Paddington station in west London on a gun carriage from Westminster Hall at the Palace of Westminster, where he lay in state, to St George's Chapel, Windsor Castle.

A silent crowd lined the route along London's foggy streets during the three-hour procession. His eldest daughter, who at the age of 25 had become Queen Elizabeth II, followed in a horse-drawn coach.

On August 27, 1979, Louis Mountbatten, the queen's cousin and last viceroy of India, was killed at the age of 79, by an Irish Republican Army bomb placed on his boat.

On September 5, hundreds of thousands of people gathered in London along with representatives of the British armed forces, US Marines, and French, Canadian, Indian and Burmese soldiers to pay him a solemn farewell.

An escort of six tanks took the coffin from Westminster Abbey to Waterloo station where it was transported to Romsey, near Southampton, southern England, for burial at the town's abbey.

On September 6, 1997, the country came to a standstill for the funeral of Diana, Princess of Wales, who died in Paris on August 31 in a car crash aged 36.

Her death sent shockwaves around the world. Millions of people lined the streets and an estimated 2.5 billion viewers watched the service on television.

When the procession passed Buckingham Palace, Queen Elizabeth II, who had been criticised for her stand-offish initial reaction to the death of the former wife of Prince Charles, publicly bowed her head.

The couple's two young sons, princes William and Harry, walked, heads bowed, behind their mother's coffin. Diana was buried at Althorp, her family's historic home in Northamptonshire, on an island in the middle of a lake.

The private funeral was attended by about 450 family and friends, including 30 or so members of the royal family such as the queen, Margaret's ex-husband Lord Snowdon, and her two children Viscount Linley and Lady Sarah Chatto.

Despite concerns over her own health, the Queen Mother attended the service at St George's Chapel in Windsor Castle.

It was exactly 50 years since she had buried her husband, King George VI. In a break with royal tradition, Margaret was cremated.

Just seven weeks after Margaret, the Queen Mother, Queen Elizabeth, died in her sleep on March 30 at Windsor. Her funeral on April 9 marked the end of an era.

The royal matriarch was the last empress consort of India and a link to a bygone age. She was much loved as a symbol of resistance to the Nazi enemy during World War II.

Over four days, more than 200,000 people filed past her coffin paying their respects. Her funeral at Westminster Abbey was attended by 2,000 people.

More than a million people lined the 37-kilometre (23-mile) route taken by the funeral procession to Windsor, where she was interred with her husband at the King George VI memorial chapel, and alongside Margaret's ashes.

Queen Elizabeth II's husband of 73 years died on April 9, 2021, just a few months shy of his 100th birthday and after a lengthy stay in hospital for a heart condition.

The duke's coffin was borne to St George's Chapel on a specially adapted Land Rover he had designed himself.

His remains were interred in the Royal Vault at Windsor, with instructions to be transferred on his wife's death to the King George VI memorial chapel.

Tweets by @forbesindia
Photo of the day: Pakistan: The catastrophe continues
'Focus on the input, you can't control the output: Amazon's country manager