Designed in the southern French town of Tarbes and assembled in Salzgitter in central Germany, Alstom's 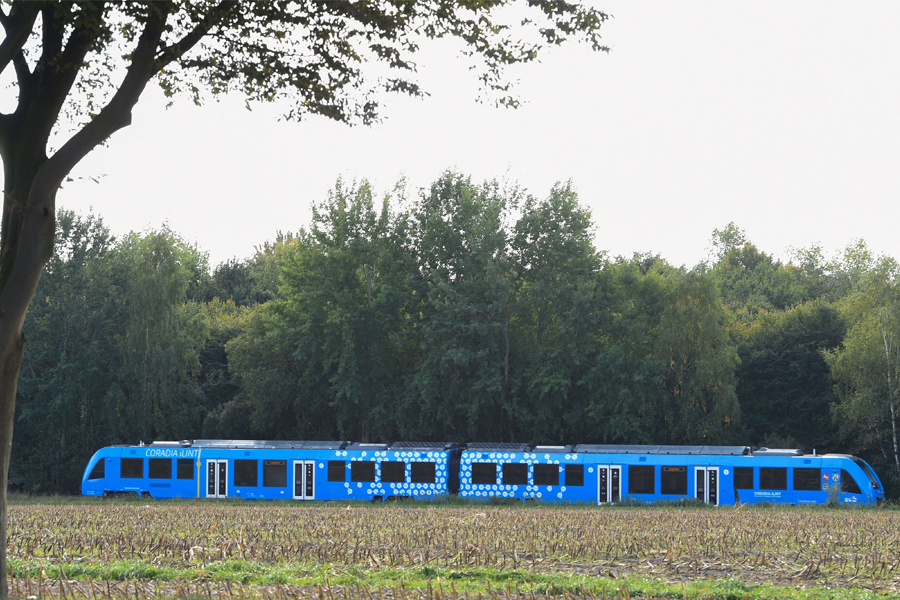 Germany on Wednesday will inaugurate a railway line powered entirely by hydrogen, a "world first" and a major step forward for green train transport despite nagging supply challenges.

A fleet of 14 trains provided by French industrial giant Alstom to the German state Lower Saxony will replace the diesel locomotives on the 100 kilometres (60 miles) of track connecting the cities of Cuxhaven, Bremerhaven, Bremervoerde and Buxtehude near Hamburg.

"Whatever the time of day, passengers will travel on this route thanks to hydrogen", Stefan Schrank, project manager at Alstom, told AFP, hailing a "world first".

Hydrogen trains have become a promising way to decarbonise the rail sector and replace diesel, which still powers 20 percent of journeys in Germany.

Billed as a "zero emission" mode of transport, the trains mix hydrogen on board with oxygen present in the ambient air, thanks to a fuel cell installed in the roof. This produces the electricity needed to pull the train.

Run for its money

Designed in the southern French town of Tarbes and assembled in Salzgitter in central Germany, Alstom's trains—called Coradia iLint—are trailblazers in the sector.

The project drew investment of "several tens of millions of euros" and created jobs for up to 80 employees in the two countries, according to Alstom.

Commercial trials have been carried out since 2018 on the line with two hydrogen trains but now the entire fleet is adopting the ground-breaking technology.

The French group has inked four contracts for several dozen trains between Germany, France and Italy, with no sign of demand waning.

In Germany alone "between 2,500 and 3,000 diesel trains could be replaced by hydrogen models", Schrank estimates.

"By 2035, around 15 to 20 percent of the regional European market could run on hydrogen," Alexandre Charpentier, rail expert at consultancy Roland Berger, told AFP.

Hydrogen trains are particularly attractive on short regional lines where the cost of a transition to electric outstrips the profitability of the route.

Currently, around one out of two regional trains in Europe runs on diesel.

But Alstom's competitors are ready to give it a run for its money. German behemoth Siemens unveiled a prototype hydrogen train with national rail company Deutsche Bahn in May, with a view to a roll-out in 2024.

But, despite the attractive prospects, "there are real barriers" to a big expansion with hydrogen, Charpentier said.

For starters, trains are not the only means of transport hungry for the fuel.

The entire sector, whether it be road vehicles or aircraft, not to mention heavy industry such as steel and chemicals, are eyeing hydrogen to slash CO2 emissions.

Although Germany announced in 2020 an ambitious seven-billion-euro (-dollar) plan to become a leader in hydrogen technologies within a decade, the infrastructure is still lacking in Europe's top economy.

It is a problem seen across the continent, where colossal investment would be needed for a real shift to hydrogen.

"For this reason, we do not foresee a 100-percent replacement of diesel trains with hydrogen," Charpentier said.

Other, more common manufacturing methods exist, but they emit greenhouse gases because they are made from fossil fuels.

The Lower Saxony line will in the beginning have to use a hydrogen by-product of certain industries such as the chemical sector.

The French research institute IFP specialising in energy issues says that hydrogen is currently "95 percent derived from the transformation of fossil fuels, almost half of which come from natural gas".

Europe's enduring reliance on gas from Russia amid massive tensions over the Kremlin's invasion of Ukraine poses major challenges for the development of hydrogen in rail transport.

"Political leaders will have to decide which sector to prioritise when determining what the production of hydrogen will or won't go to," Charpentier said.

Germany will also have to import massively to meet its needs.

Partnerships have recently been signed with India and Morocco, and an agreement to import hydrogen from Canada was on the agenda this week during a visit by Chancellor Olaf Scholz.

Tweets by @forbesindia
Need to buy a Lamborghini? You will have to wait until 2025 for delivery
Crypto-aware parents and college graduates want their children to learn about crypto in schools