Tesla's CEO has a long history of promising products that materialize later than he said they would or not at all, but his timeline for the Cybertruck is more definite than the one he gave to investors in January, when he said that delivery in 2023 was "most likely" 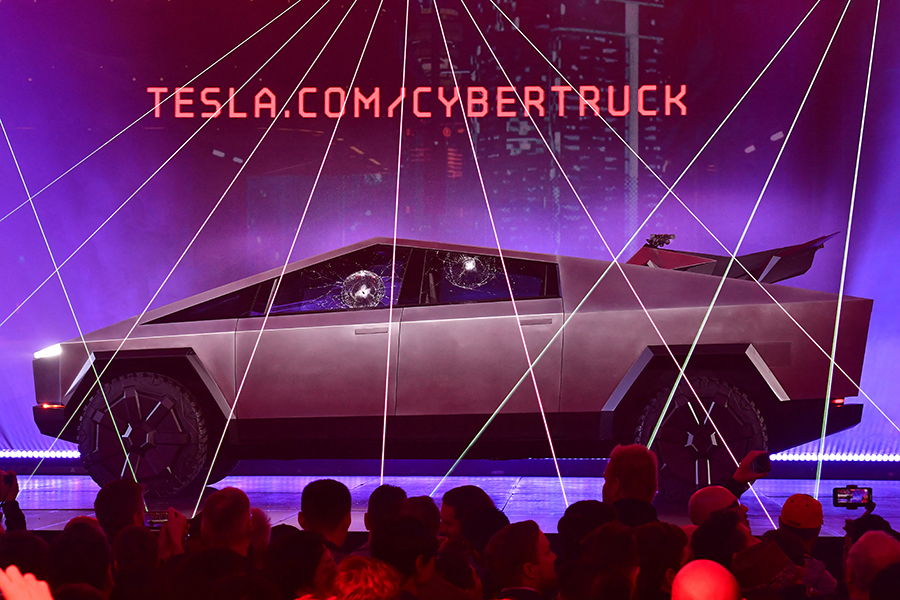 The truck, with an angular design and stainless-steel skin that sets it apart from traditional pickups Image: Frederic J. Brown / AFP

Tesla will begin producing its much-delayed electric pickup, the Cybertruck, next year along with numerous other new products, Elon Musk, the carmaker’s CEO, said late Thursday.

The truck, with an angular design and stainless-steel skin that sets it apart from traditional pickups, has been delayed after an inauspicious unveiling in 2019, when a designer lobbed a metal ball at a window in what was supposed to be a demonstration of the vehicle’s toughness.

Instead, the window cracked.

“We’re going to smash the window again,” Musk joked as a Cybertruck rolled onstage at a lavish “Cyber Rodeo” organized by Tesla in Austin, Texas, to show off its newly built factory near the state capital.

“We can’t wait to build this here,” Musk, wearing a black cowboy hat, said of the truck. “Sorry for the delay. But you’re going to have this next year, and it’s really going to be great.”

Tesla’s CEO has a long history of promising products that materialize later than he said they would or not at all, but his timeline for the Cybertruck is more definite than the one he gave to investors in January, when he said that delivery in 2023 was “most likely.”

Delays in producing the Cybertruck have allowed rivals to come to market sooner with pickups, one of the most popular types of vehicle in the United States. Ford is expected to begin delivering the Lightning, a battery-powered version of its F-150, this summer. Rivian’s electric pickup went on sale late last year to rave reviews, but the company has had trouble ramping up production, a common problem for new car companies.

Tesla invited about 15,000 people to the Cyber Rodeo, which Musk, with his customary hyperbole, billed as the “biggest party on Earth.” The factory is as large as three Pentagons, he said.

Local schools closed early so that parents could avoid traffic jams caused by those flocking to the event, television station KXAN reported. Actor Harrison Ford was among the guests. Tesla parked red, white and blue cars in formation to look like the Texas state flag.

The factory is part of a global expansion by Tesla that includes a newly opened plant near Berlin. Along with an existing factory in Shanghai, the new assembly lines could help the company repeat its growth in 2021, when it nearly doubled sales to almost 1 million vehicles, far outpacing other major carmakers.

“This year is all about scaling up,” Musk said. “Next year, there is going to be a massive wave of new products.”

In 2023, Tesla will also produce a roadster, a semi-truck and “hopefully” the first version of a humanoid robot called Optimus, which, Musk said, will do “anything that humans won’t want to do.” He added that a beta version of full self-driving software would be available to North American customers this year.