Amazon has an insatiable appetite for electric vans, thanks to a ballooning logistics operation and a pledge that half of its deliveries will be carbon-neutral by 2030 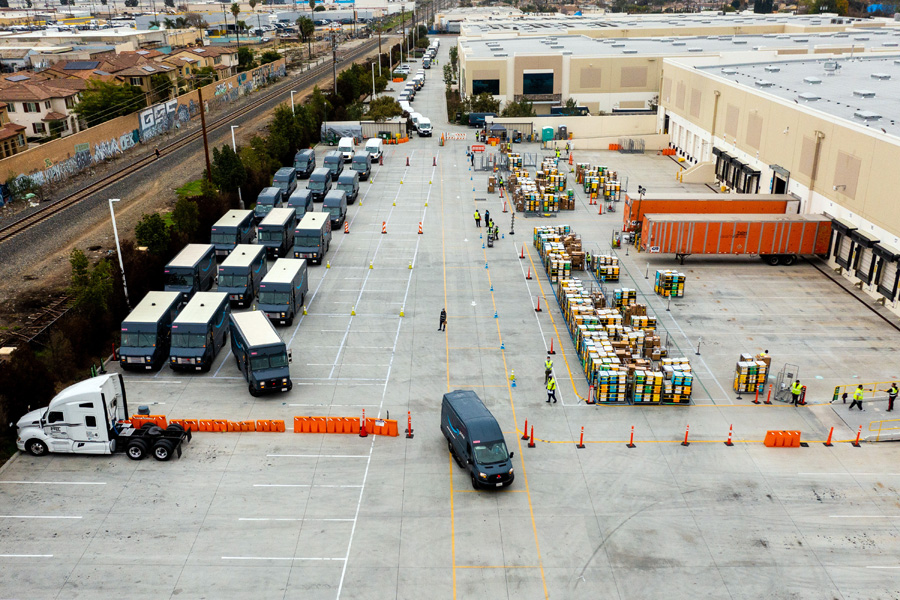 Amazon delivery vans leave a shipping facility in Rosemead, Calif., on Jan. 13, 2022. The company has big plans to turn its delivery fleet green, but very few of the vehicles are made right now. (Roger Kisby/The New York Times)

In the fall, Jeff Bezos tweeted praise for Rivian, a startup under contract to make 100,000 electric delivery vans for Amazon, and its founder, R.J. Scaringe, calling him “one of the greatest entrepreneurs I’ve ever met.”

The comment may have been in jest, but the problem he raised is a serious one.

Amazon has an insatiable appetite for electric vans, thanks to a ballooning logistics operation and a pledge that half of its deliveries will be carbon-neutral by 2030. But that hunger is running into the reality that the auto industry barely produces any of the vehicles yet.

While consumer electric cars are finally hitting their stride — Tesla delivered almost 1 million cars last year — the market for commercial electric vehicles is still nascent, with their heavier loads multiplying the technology challenges. Amazon would not say if Rivian delivered the first 10 production vans in December, as was expected, and other automakers are not manufacturing at scale yet, either.

Even though Amazon owns nearly 20% of Rivian, it has also put in orders with other automakers, to lay claim to as many vans as it can before they are even under production.

This month, Amazon said it would buy “thousands” of electric Ram vans from Stellantis, the company formed last year after the merger of Fiat Chrysler and the French automaker Peugeot. It has also ordered 1,800 electric vans from Daimler in Europe. And it has formed a partnership with Mahindra, an Indian automaker, as part of its goal to have 10,000 electric three-wheeled vehicles on the road by 2025.

“The scale and speed at which we’re trying to do this requires a lot of invention, testing and learning, and a completely new playbook,” Ross Rachey, who oversees Amazon’s global fleet, said in a statement.

Amazon expected to have roughly 175,000 of its vans on the road by the end of 2021, according to an internal document from late 2020, nearly all of which burned fossil fuels.

That number is growing quickly. Amazon is several years — and tens of billions of dollars — into a huge push to deliver packages, shifting away from relying on large carriers such as UPS. To begin the expansion, Amazon ordered 20,000 diesel Sprinter vans from Mercedes-Benz.

Through its network of contractors, Amazon now delivers more than half of its orders globally, and far more in the United States. Amazon has six times as many delivery depots now as it did in 2017, with at least 50% more new facilities set to open this year, according to data from MWPVL, a logistics consultancy.

“Electrification of their delivery fleet is a really important part of that strategy,” said Anne Goodchild, who leads the University of Washington’s work on supply chain, logistics and freight transportation.

Delivery vans are well suited to electric propulsion because they usually travel 100 miles or under in a day, which means they don’t need large battery packs that add to the cost of electric cars. Delivery trucks are often used during the day and can be recharged overnight, and usually require less maintenance than gasoline trucks. Electric vehicles don’t have transmissions and certain other mechanical components that wear out quickly in the heavy stop-and-go typical in delivery routes.

In September 2019, when Bezos announced Amazon’s huge Rivian order — the largest ever order of electric vehicles — he positioned it as central to Amazon’s commitment to reduce its carbon footprint. At the time, he said he expected the 100,000 vans to be on the road “by 2024.” Amazon later said he misspoke, and that the order had been for 2030.

Amazon invested at least $1.3 billion in Rivian, which Amazon says is supposed to make 10,000 vans as early as this year. Amazon also locked up exclusive rights to Rivian’s commercial vans for four years, with the right of first refusal for two years after that. The companies have been testing the vans for almost a year.

In regulatory disclosures in November, Rivian said it would make the full delivery to Amazon “by 2025.” Last week, Rachey said Amazon expected to have the vehicles on the road “no later than 2030.”

Amazon is not the only delivery company interested in the burgeoning market.

FedEx, in pursuit of its goal of becoming carbon-neutral by 2040, is preparing to buy tens of thousands of electric vans over the next eight years. The company hopes that battery-powered vehicles make up half of all of its van purchases by 2025, and 100% by 2030. The company has its sights on eventually building a fleet of perhaps 250,000 small and midsize electric vans.

Getting the vans is just part of the challenge. Keeping them charged is another.

Job postings at Amazon say it is “building the largest EV fleet and charging network in the world.” Rachey said the infrastructure for charging the vehicles had some of the longest lead times in the entire effort, requiring work with utilities, charging operators and the physical warehouses where the vans are based.

Amazon is also looking into delivery routes and other factors that reduce battery efficiency, such as driving uphill and running air conditioning, things that could require charging in the middle of a worker’s shift and not just overnight.

“It is very normal now for trucking and logistics companies to talk about sustainability not as some peripheral thing but as a fundamental shift,” Goodchild said, adding that Amazon, by making commitments upfront, is “helping to create a market.”

Tweets by @forbesindia
Photo Of The Day: Just chilling
Once a hostage, she's now running for President of Colombia