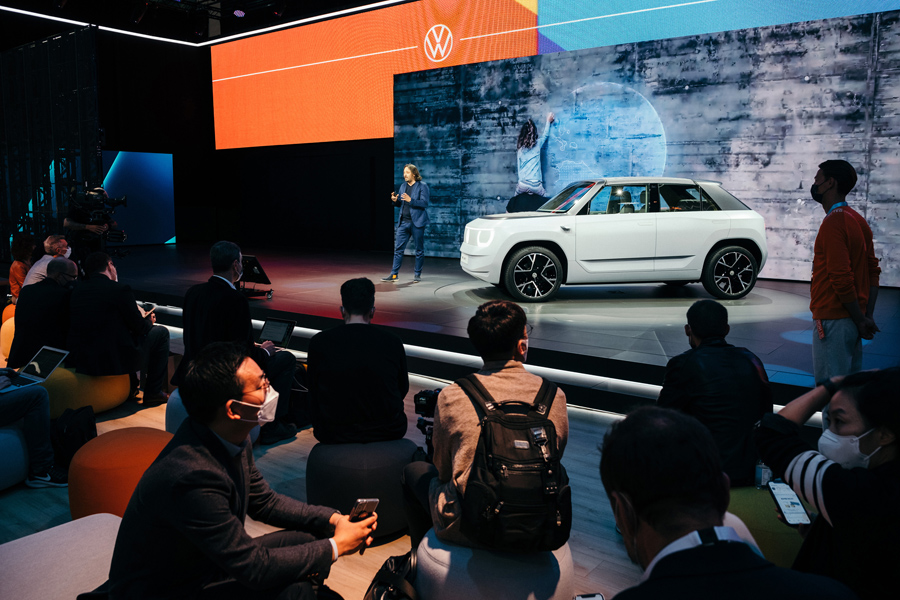 The VW chief designer Jozef Kaban speaks about the Volkswagen ID at an event in Munich, Sept. 6, 2021. Europeans bought more electric cars than diesels in December 2021, a stunning illustration of the growing popularity of battery power and the decline of diesel, which was once the most popular engine option in Europe. (Felix Schmitt/The New York Times)

Europeans bought more electric cars than diesels in December, a stunning illustration of the growing popularity of battery power and the decline of diesel, which was once the most popular engine option in Europe.

More than 20% of new cars sold in Europe and Britain in December were powered solely by electricity, according to data compiled by Matthias Schmidt, an analyst in Berlin who tracks electric vehicles sales. Sales of diesel vehicles, which as recently as 2015 accounted for more than half of the new cars in the European Union, slipped below 19%.

The December figures illustrate how electric vehicles are fast becoming mainstream. Sales of battery-powered cars soared in Europe, the United States and China last year while sales of conventional vehicles stagnated. Government incentives have made electric vehicles more affordable, the variety of electric cars to choose from has grown and buyers have become more conscious of the environmental cost of vehicles powered by internal combustion engines.

The growth of electric vehicles was all the more remarkable considering that the overall car market is in crisis. Sales of all new cars in the EU fell more than 20% in November as a shortage of semiconductors strangled production, according to the European Automobile Manufacturers’ Association.

“This is the real deal,” Schmidt said in an email. His figures, based on data from European government agencies, were first reported by the Financial Times. The data includes Norway, which is not a member of the EU and has the highest percentage of electric vehicles of any nation on the Continent.

Tesla was the bestselling electric vehicle brand in 2021, followed by Volkswagen, Schmidt said. Tesla will be in a good position to expand its leadership when the carmaker opens a new factory in Berlin this year to serve the European market. Tesla has been importing cars from China.

Diesel was long popular in Europe because of tax policies that made diesel fuel less expensive than gasoline. Diesel-powered vehicles are generally more fuel-efficient than gasoline cars, but produce more harmful pollution.

Diesel’s decline began in 2015 after Volkswagen admitted that it had sold millions of diesel cars equipped with software that produced artificially low emissions during official tests. The illegal software made the vehicles appear much cleaner than they were.

The scandal called attention to the pollution caused by diesel cars, which is blamed for tens of thousands of premature deaths. Cities such as Hamburg and Berlin banned diesel cars from some neighborhoods, while the EU tightened its rules on vehicle pollution. Carmakers must pay substantial fines if they do not reduce carbon dioxide emissions to prescribed levels.

The regulations encouraged carmakers to develop electric vehicles, which produce no tailpipe emissions, to comply. Gasoline vehicles are still more popular, accounting for 40% of new cars, but are also in long-term decline.

Tweets by @forbesindia
Sandipan Mitra, CEO of HungerBox, on going from cafeteria digitalisation to food tech platform
Photo Of The Day: EV DTC