Ingrid Betancourt, a former congresswoman and one-time guerrilla hostage who has come to symbolise both the brutality of Colombia's long war and the country's efforts at reconciliation, will run for president 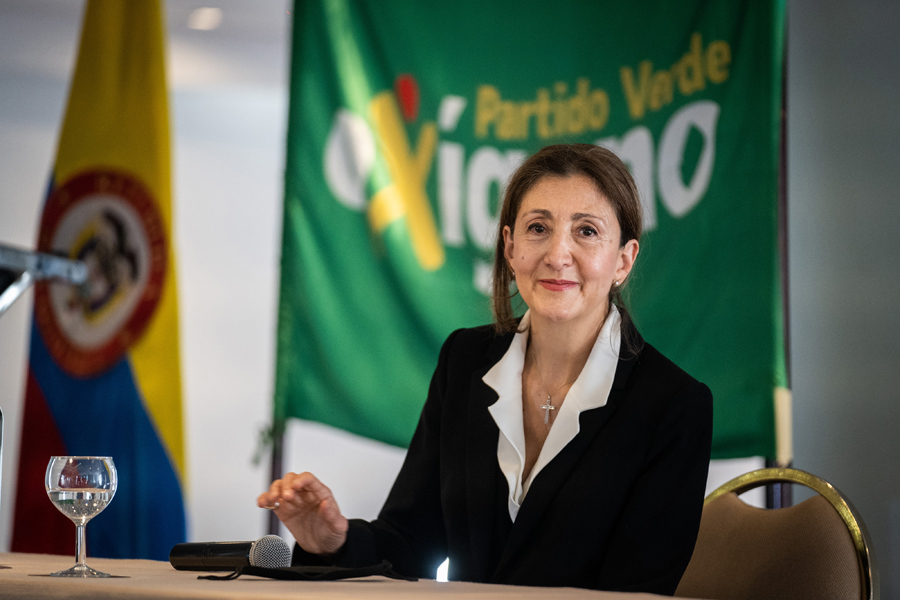 Ingrid Betancourt, the politician and former Revolutionary Armed Forces of Colombia hostage, at a news conference in Bogota, Colombia on Tuesday, Jan. 18, 2022, where she announced she will run for president. Many in Colombia are fed up with the political status quo, a sentiment that burst into the public sphere last May, when thousands took to the streets for more than a month to protest hardship that was only made worse by the pandemic. (Nathalia Angarita/The New York Times)

BOGOTÁ, Colombia — Ingrid Betancourt, a former congresswoman and one-time guerrilla hostage who has come to symbolize both the brutality of Colombia’s long war and the country’s efforts at reconciliation, will run for president, she said Tuesday.

Betancourt enters a wide open race at a time when Colombia is at a critical political and social crossroads.

When she was kidnapped 20 years ago, Betancourt was campaigning for the same office. Now, she said, the country is facing the same “corrupt system” and “political machinery” that she had fought back then.

“Today I am here to finish what I started,” she said, standing on a stage at a hotel in downtown Bogotá, the country’s capital, flanked by allies.

Betancourt, who was captured in 2002 and held by the country’s largest guerrilla force, the Revolutionary Armed Forces of Colombia, for more than six years, announced her bid for the May election with the country facing enormous challenges.

Following more than 50 years of war, the government and the rebel group, known as FARC, signed a peace deal in 2016. But since then, a swell of other armed groups have swept into the vacuum and continued to fight.

Violence has surged in parts of the countryside — and critics have faulted the government for not investing enough to address the inequality and poverty that had helped fuel the war, as it had committed to doing in the peace deal.

Many in Colombia are fed up with the political status quo, a sentiment that burst into the public sphere last May, when thousands took to the streets for more than a month to protest hardship that was only made worse by the pandemic.

Following her years in captivity — when she was sometimes held in chains — she has both supported the peace process and criticized the FARC, emerging as a symbol of national attempts to acknowledge the costs of the war, but also to move beyond it.

In an interview with The New York Times last year, Betancourt called the peace deal “a window — a generational opportunity — to leave behind the insane violence we have lived in all our lives.”

The question, Guzmán said, is whether that is what Colombians want.

“All our elections have been fear and hope and hate,” he went on. “No election has really been fought on compassion and reconciliation.”

There is widespread discontent with the current president, Iván Duque, who is a product of the country’s right-wing political establishment, while a left-wing populist, Gustavo Petro, is leading in the polls amid a leftist, anti-incumbent wave that is sweeping Latin America.

“Can Ingrid become a balm to those prevailing negative emotions that we’re feeling right now?” he said. “I don’t know. That’s one of the things that her candidacy is going to tell us.”

But to make any headway among voters, he said, “she needs to sell the idea that reconciliation is better than populism.”

While Betancourt is widely known throughout the country, a win in May is far from certain.

To even get to the May election, Betancourt would first have to win the March primary, in which she will compete against others in the center, including Alejandro Gaviria, a former health minister and recent head of a prestigious university.

Guzmán pointed out that Betancourt joined the race late in the electoral calendar and called her bid “a Hail Mary.”

Colombia has never had a woman president, and Betancourt is one of just four female candidates in the three leading coalitions.

Tweets by @forbesindia
Can anyone satisfy Amazon's craving for electric vans?
Network Management In The Age Of AI