The Medicine Prize will be announced around 11:30 am (0930 GMT) in Stockholm on Monday, followed by the awards for physics on Tuesday, chemistry on Wednesday and literature on Thursday 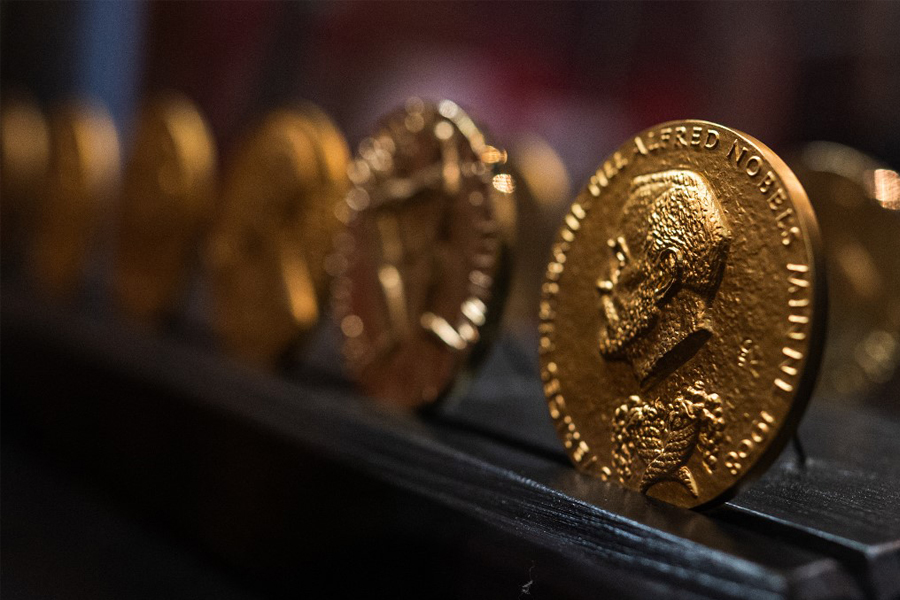 Established more than 120 years ago before Europe was ravaged by two world wars, the Nobel prizes will celebrate those who have "conferred the greatest benefit on mankind" after a year marked by bloodshed and devastation in Ukraine. Image: Jonathan Nackstrand/AFP

Stockholm, Sweden: Breast cancer discoveries and mRNA vaccines are seen as possible winners when the Nobel Medicine Prize kicks off a week of winner announcements on Monday, with this year's awards held under the shadow of war in Europe.

Established more than 120 years ago before Europe was ravaged by two world wars, the Nobel prizes will celebrate those who have "conferred the greatest benefit on mankind" after a year marked by bloodshed and devastation in Ukraine.
The Medicine Prize will be announced around 11:30 am (0930 GMT) in Stockholm on Monday, followed by the awards for physics on Tuesday, chemistry on Wednesday and literature on Thursday.
The Peace Prize, the most highly anticipated of the awards and the only one announced in Oslo, will follow on Friday, with the Economics Prize wrapping things up on October 10.
For medicine, one woman's name keeps popping up among prize watchers: US geneticist Mary-Claire King, who in 1990 discovered the BRCA1 gene responsible for a hereditary form of breast cancer.
She could be honoured together with oncologists Dennis Slamon of the United States and Germany's Axel Ullrich for their research, which led to the development of the breast cancer drug Herceptin.
However, if the jury were to break with its tradition of honouring decades-old research, another woman could be well placed for her role in fighting the Covid-19 pandemic.

Already honoured by almost all other major medicine prizes, Hungarian-born Katalin Kariko could win for her pioneering research which led directly to the first mRNA vaccines to fight Covid-19, made by Pfizer and Moderna.
"There's not only the direct benefit that it gave us to fight the pandemic, it's also the first in a series of very promising applications using this technology," Nobel watcher Ulrika Bjorksten, the head of Swedish public radio's science service, told AFP.
Also read: Nobel 2022 prize season under shadow of war in Ukraine
Kariko could be honoured together with her collaborator Drew Weissman of the United States and Pieter Cullis of Canada.
Last year, the prize went to US researchers David Julius and Ardem Patapoutian for their discoveries on human receptors for temperature and touch.
David Pendlebury, who heads the closely watched Clarivate analytics group which lists dozens of possible winners for the Nobel science prizes, said his money was on King and Slamon this year.
But he also mentioned Hong Kong molecular biologist Yuk Ming Dennis Lo, who pioneered the development of non-invasive prenatal testing.
He also developed a new method of detecting cancer early using just a few drops of blood, dubbed liquid biopsies.
With a simple blood draw "you can determine all kinds of possible problems and diseases", Pendlebury said.
Male researchers based in the United States have overwhelmingly dominated the Nobel science prizes through the years.
The various prize committees have insisted they are trying to recognise women's achievements, but say many of the top discoveries were made decades ago when fewer women were involved in high-level research.
Last year, 12 men and one woman won Nobel Prizes, with all of the science nods going to men.

For the Literature Prize on Thursday, literary critics told AFP they thought the Swedish Academy may go for a more mainstream author this year, after selecting lesser-known writers the past two years.
Last year, Tanzanian author Abdulrazak Gurnah won, while US poet Louise Gluck was crowned in 2020.
US novelist Joyce Carol Oates, France's Annie Ernaux and Maryse Conde, Russia's Lyudmila Ulitskaya and Canada's Margaret Atwood have all been cited as potential laureates if the committee has its eyes on a woman.
Online betting sites however have France's Michel Houellebecq as the favourite, ahead of British author Salman Rushdie, who was the victim of an attempted murder attack in August.
Also read: To ease the climate crisis, first figure out what works: Nobel Laureate Esther Duflo
But it is the Peace Prize that is expected to hold special significance this year.
After Russian journalist Dmitry Muratov won the prize last year together with his Philippine colleague Maria Ressa in the name of freedom of expression, will the Norwegian Nobel Committee award another anti-Putin prize after Moscow's invasion of Ukraine?
Not since World War II has a conflict raged between two countries so close to Oslo.
The International Criminal Court, tasked with investigating war crimes in Ukraine, and the International Court of Justice — both based in The Hague — have been mentioned as possible laureates this year.
So have jailed Russian dissident Alexei Navalny and Belarusian opposition leader Svetlana Tikhanovskaya.
If the committee were to focus on the climate crisis, experts tipped Swedish activist Greta Thunberg, possibly together with British environmentalist David Attenborough or other activists such as Sudan's Nisreen Elsaim and Ghana's Chibeze Ezekiel.

Tweets by @forbesindia
UAE's economy ministry to set up shop in the metaverse
Prashant Kumar: Rewriting the Yes Bank story