In some ways, the challenges now are "greater than when the pandemic hit hard in 2020", Premier Li Keqiang told a State Council meeting on Wednesday, according to a readout by the official Xinhua news agency 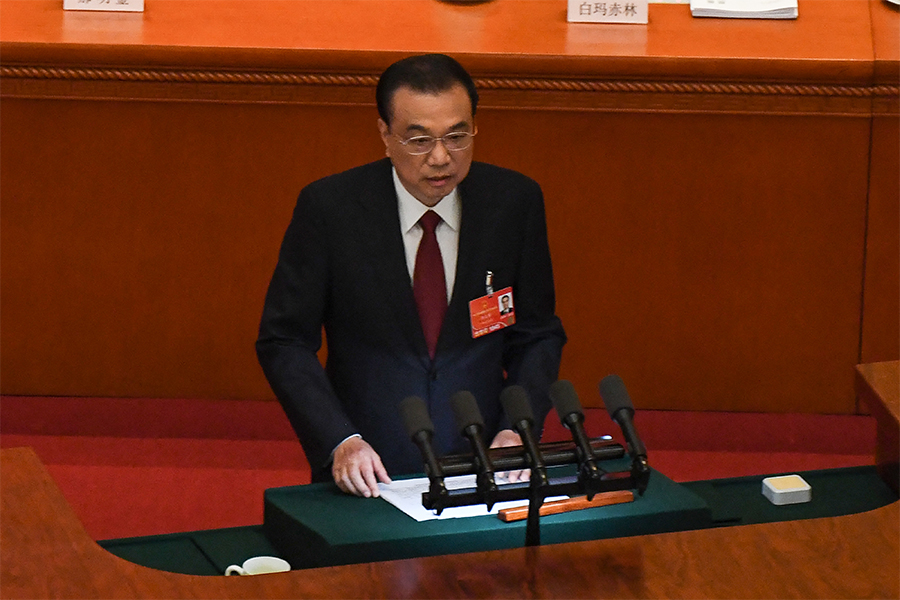 In some ways, the challenges now are "greater than when the pandemic hit hard in 2020", Premier Li Keqiang told a State Council meeting. (Credits: Leo RAMIREZ/ AFP)

China's premier has sounded an unusually stark warning about the world's second-largest economy, saying it must return to normal as the country's zero-Covid strategy bites into growth.
China is the last major economy welded to a policy of mass testing and rapid lockdowns to eliminate virus clusters, but the strict curbs have battered businesses.
Restrictions on dozens of cities in recent months—including the manufacturing hubs of Shenzhen and Shanghai as well as the breadbasket of Jilin—have tangled supply chains and dragged economic indicators to their lowest levels in around two years.
In some ways, the challenges now are "greater than when the pandemic hit hard in 2020", Premier Li Keqiang told a State Council meeting on Wednesday, according to a readout by the official Xinhua news agency.

"We are currently at a critical juncture in determining the economic trend of the whole year," Xinhua quoted Li as saying.
"We must seize the time window and strive to bring the economy back onto a normal track."
Li's remarks are the latest in a growing chorus of calls from officials and business leaders for more balance between stopping the virus and helping the ailing economy.
China's retail sales plunged 11.1 percent on-year in April while factory output sank 2.9 percent—the worst showing since the early days of the Covid crisis.
And the urban unemployment rate edged back towards its February 2020 peak, challenging policymakers' full-year growth target of around 5.5 percent.
In March and particularly in April, indicators such as employment, industrial production, electricity consumption and freight dropped "significantly", Li said at the State Council meeting.
He stressed the importance of coordinating virus control and economic development, according to Xinhua.

China's current outbreak—fuelled by the highly transmissible Omicron virus variant—is the worst since the early days of the pandemic in 2020.
Its biggest city and business hub Shanghai has been almost entirely sealed off since April, crushing businesses, while curbs are creeping in the capital Beijing.
The government has offered tax relief and a bond drive to help industries, and President Xi Jinping earlier called for an "all-out" infrastructure push.
But analysts have cautioned that growth will keep wilting until China eases its rigid virus controls.
S&P Global Ratings this month lowered its full-year growth forecast for China from 4.9 percent to 4.2 percent due to Covid curbs.
And Nomura analysts warned in a recent note that there is "increasing potential for negative GDP growth in the second quarter".
Wednesday's State Council teleconference involved an unusually large cohort of provincial, city and county officials, Chinese outlet The Economic Observer reported.
The economic woes come in a pivotal political year for Xi, who is eyeing another term in power at the Communist Party Congress this autumn.
© Agence France-Presse

Tweets by @forbesindia
The risk of delisting for the US listed Chinese ADRs
Boeing Starliner completes key test mission to ISS, with some hiccups