CNN-News18 becomes India's No.1 English News channel, racing ahead of the competition

As per the BARC data, CNN-News18 has garnered 26.3 percent market share in the India urban+rural segment 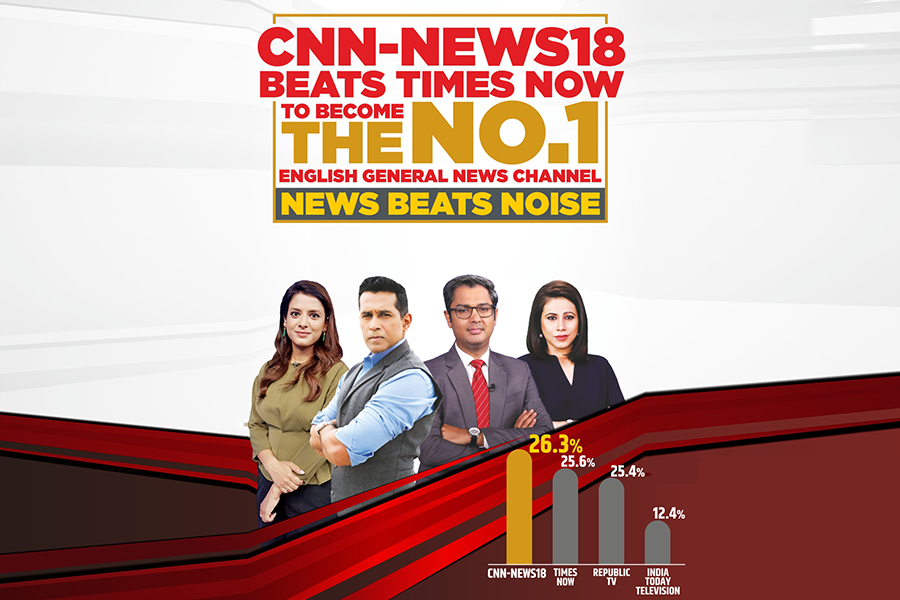 CNN-News18 has become the number one English news channel in the country according to the latest data released by the Broadcast Audience Research Council (BARC).

In the Prime-Time segment, the channel has garnered 40.2 percent viewership share, as compared to 25 percent of Republic and 20.2 percent of Times Now.

Commenting on the channel’s achievement, Zakka Jacob, Managing Editor, CNN-News18, said “I want to thank our viewers who have reposed immense faith in CNN News18’s programming and in our journalism. We have always believed in keeping it classy, that you don’t have to shout from the rooftops. That is reflected in our choice of stories and programming formats. CNN-News18 has to be the youngest newsroom in the country. We are reflective of a new, young India which is not shy of asserting itself. We are a young and dynamic team, and we are just getting started”.

Smriti Mehra, CEO, Business News, Network18 Group, said “The channel has managed to clinch the top position with its philosophy of bringing news, which is rational and thought-provoking without any jingoism. A slew of new shows launched such as ‘Bits To Billion – The Unicorn Story’ focusing on the inspirational stories of the Unicorns; ‘Plain Speak’ which brings out the hard facts of the most talked-about news story, and ‘A Billion New Ideas’ highlighting the power of the Ideas, Innovations and Intentions have put the channel firmly at the top.’

On the marketing front, CNN-NEWS18 chose to put its voice and might behind campaigns that reflected the mood of the nation with a sense of responsibility towards the society. Some of the noteworthy campaigns were #DontShowMeYourFace encouraging people to continue wearing masks during the pandemic and honouring the doctors for their relentless services during the pandemic with the campaign #ExtraordinaryAmongUs to name a few.