Tesla CEO became its largest shareholder following the purchase of 73.5 million shares or 9.2 percent of common stock, according to a securities filing worth $2.9 billion 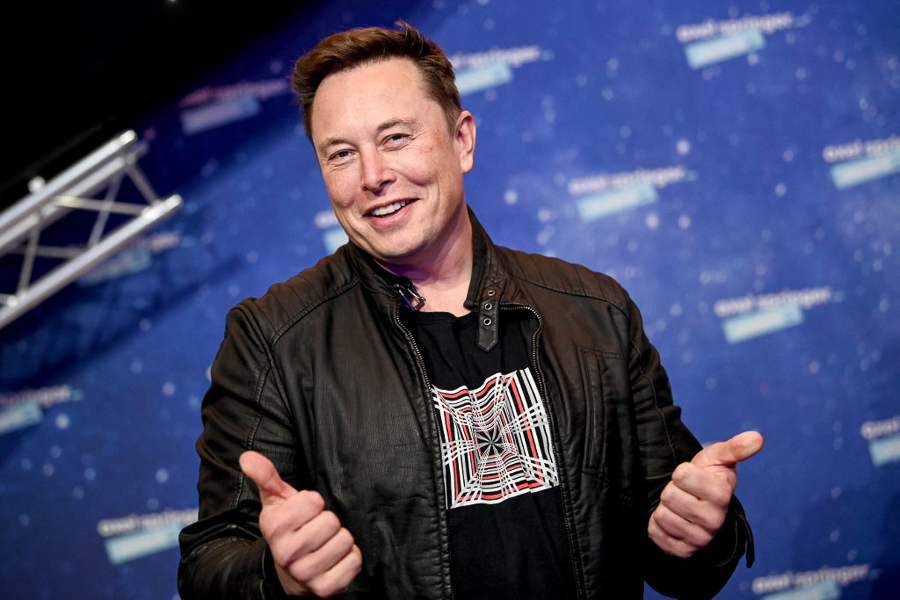 New York, United States: Twitter's shares soared after Tesla CEO Elon Musk disclosed on Monday a large stake in the social media company, which he has criticized for its approach to speech rights.
Musk, who has more than 80 million followers on the microblogging platform, became its largest shareholder following the purchase of 73.5 million shares or 9.2 percent of common stock, according to a securities filing.
The investment is worth about $2.9 billion based on Friday's share price. Musk is currently the world's richest man, with a net worth of $287.6 billion, according to Forbes.

The billionaire is a frequent Twitter user, regularly mixing in inflammatory and controversial statements about issues or other public figures with remarks that are whimsical or business-focused.
He has also sparred repeatedly with federal securities regulators, who cracked down on his social media use after a purported effort to take Tesla private in 2018 fell apart.
Twitter shares rocketed higher on the announcement, surging 27.1 percent to $49.97.
"We would expect this passive stake as just the start of broader conversations with the Twitter board (and) management that could ultimately lead to an active stake and a (potentially) more aggressive ownership role of Twitter," analysts Daniel Ives and John Katsingris of Wedbush wrote in a note.

Disclosure of Musk's stake follows a recent poll launched by the billionaire to his followers.
Saying "free speech is essential to a functioning democracy," Musk, who has discussed possibly launching his own social media company, on March 25 launched a survey on Twitter that asked: "Do you believe Twitter rigorously adheres to this principle?"
More than two million people voted in the poll, with over 70 percent saying "no."
"Given that Twitter serves as the de facto public town square, failing to adhere to free speech principles fundamentally undermines democracy. What should be done?" he continued the next day. "Is a new platform needed?"
"Just buy twitter," was one of the first responses from tens of thousands of users.
US political conservatives have long complained that the platform censors right-wing voices, an assertion the company denies.
Its critics in particular cite Twitter's decision to ban Donald Trump over the former US president's role in fomenting the January 6, 2021 attack on the US Capitol.
Twitter has also at times punished Representative Marjorie Taylor Greene, a far right Georgia congresswoman who has repeatedly posted misinformation about Covid-19 and vaccines against it.
Greene welcomed Musk's investment on Twitter, tweeting "freedom of speech restored will enable us all to defeat them."

Musk has cited the right to freedom of speech as a driver of his efforts to undo an agreement with the Securities and Exchange Commission (SEC) that tightened his use of the social media platform following his August 2018 tweet that funding was "secured" to take Tesla private.
The following month, Musk agreed to pay $20 million to settle SEC charges of securities fraud over the claim, and to institute new controls and procedures to oversee his communications.
But Musk's attorneys have asked a federal court to cancel the agreement, saying the agency has pursed "endless unfounded investigations" into the Tesla boss and his company because Musk "remains an outspoken critic of the government."
Musk has also used Twitter to court controversy away from the business world: in March he challenged Russian President Vladimir Putin to a fight following the invasion of Ukraine, and in February, Musk drew condemnation for a tweet comparing Canadian leader Justin Trudeau to Adolf Hitler.
The billionaire famously sparred with a British caver who belittled Musk's offer to help rescue young soccer players trapped in a cave in Thailand in the summer of 2018.
Musk called the caver, Vernon Unsworth, "pedo guy" on Twitter.
Unsworth sued Musk for defamation, but a Los Angeles jury sided with the billionaire in December 2019 following a trial.
By John BIERS
© Agence France-Presse