This year's summer, torrid even by Indian standards, with temperatures exceeding 40 degrees Celsius in many areas early in the season, adds risks of dehydration and heat stroke 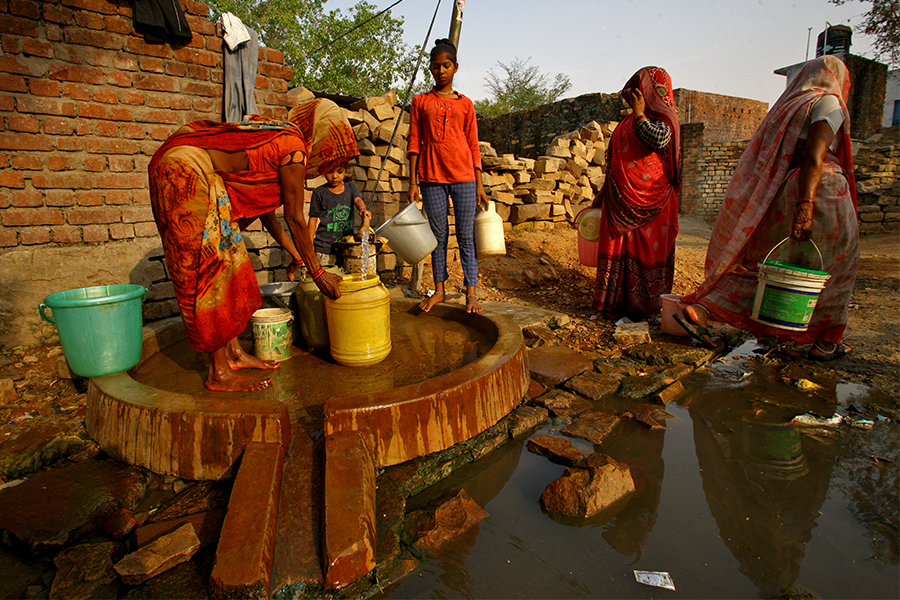 A woman fills a container with water at a municipal water pump on a hot day in Hinauti village in the northern state of Uttar Pradesh, India, May 4, 2022. Picture taken May 4, 2022. Image: REUTERS/Ritesh Shukla

HINAUTI, India (Reuters) - India's scorching summer heat adds new risks this year to an energy-sapping challenge that tribal woman Munni Adhivasi has surmounted every day for two decades, by trudging for miles to carry home water. Munni, who said she feared dying in the heat, teared up as she railed against the government's failure to provide drinking water to more than 200 tribal families in her hamlet of Hinauti in northern Uttar Pradesh.

"All I can think is how many trips I will have to make to bring water needed for drinking and cooking for four children and three goats," added Munni, who carries home on her head all 30 litres (8 gallons) her family and livestock need each day.

But this year's summer, torrid even by Indian standards, with temperatures exceeding 40 degrees Celsius in many areas early in the season, adds risks of dehydration and heat stroke to her woes.

"This drill to collect water is the worst form of punishment inflicted upon us," said Munni, who did not know her exact age, but appeared to be in her 30s.

She was among a group of women and children from four villages in the area who draw water from their usual source, a reservoir beside a quarry where many of their husbands find daily employment.

The heatwave has killed more than a dozen people nationwide since late March.

India has urged its officials to draw up action plans to ameliorate the temperatures, and is working to step up drinking water supplies to more than 50 litres a day for each person in the countryside by 2024.

To achieve this goal, it aims to build desalination plants in coastal areas, capitalise on existing resources and boost groundwater levels, which the government said in 2019 had fallen 61% in the decade since 2007.

Munni sees no rapid end to her ordeal, however.

"There are some water taps installed, but not a drop of water has ever trickled from them," she said.