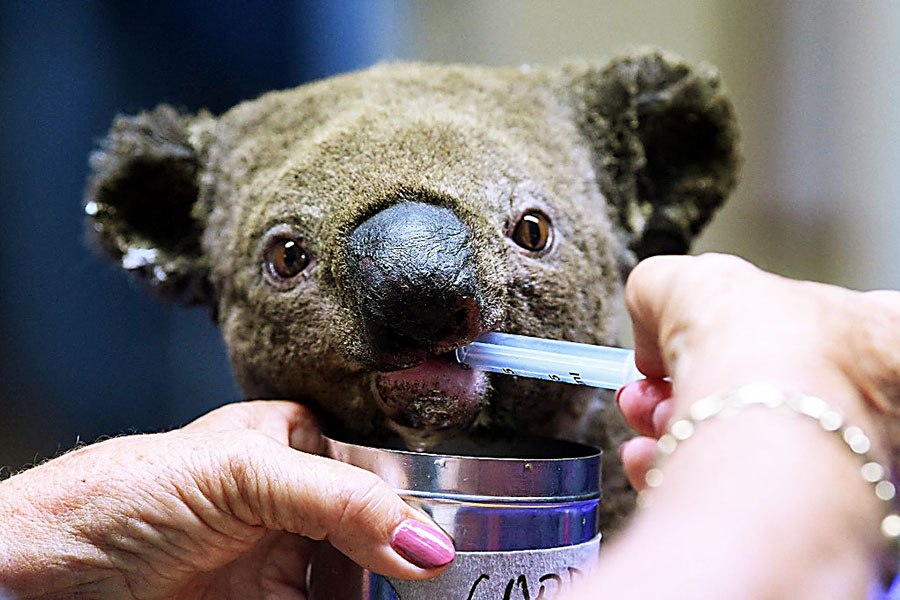 This file photo taken on November 2, 2019 shows a dehydrated and injured koala receiving treatment at the Port Macquarie Koala Hospital in Port Macquarie, after its rescue from a bushfire. Australia's unique wildlife is in retreat as it reels from bushfires, drought, human activity and global warming, according to a "shocking" government report on July 19, 2022 that prompted calls for dramatic change. Image: Saeed Khan / AFP

Australia's unique wildlife is being devastated by bushfires, drought, habitat loss and global warming, a government report said Tuesday, warning that more species are headed for extinction.
The five-yearly State of the Environment report prompted calls for dramatic action to reverse the "poor and deteriorating" state of flora and fauna depicted by scientists on land and at sea.
The damage is being hastened by a climate that has warmed Australia's average land temperature by 1.4 degrees Celsius since the early 20th century, the report said.

A failure to manage the pressures "will continue to result in species extinctions," scientists warned in the report.
Australia's environment minister, Tanya Plibersek, said it was a "shocking document".
"If we continue on the trajectory that we are on now, we will see more threatened species, we will see drier rivers, we will see degraded landscape, we will see reefs dying," she told journalists.
"The path we are on is not sustainable."
Plibersek, a member of the centre-left Labor Party that came to power in May elections, criticised the previous conservative government for failing to publish the report, which it had received in December 2021.
She promised to carve out more of Australia's land and oceans for protection, pursue "fundamental reform" of environmental laws and empower a new environmental protection agency.

Australia's 2019-2020 "Black Summer" bushfires burned more than eight million hectares of native vegetation and killed or displaced 1-3 billion animals, the report found.
The fires were an "ecological bomb ripping through southeastern Australia", Plibersek said.
Also read: Rewind 2021: Biggest natural disasters of the year
Marine heatwaves caused mass coral bleaching on the Great Barrier Reef in 2016, 2017 and 2020, scientists said in the report. Since then, a government report in March found the reef had again suffered mass bleaching.
Millions of hectares of primary forest had been cleared since 1990, the report said.
More than seven million hectares of habitat for threatened species were cleared between 2000 and 2017 without being assessed under Australia's environmental conservation laws, it found.
In five years, more than 200 plant and animal species of national significance had been added to the list of threatened species under Australia's environmental laws.
"Australia has lost more mammal species than any other continent," the report said, with the number of new species listed as being under greater threat up by eight percent in five years.

Australia's cities are also growing at a rapid clip, scientists found, raising urban heat, pollution and waste while stretching water and energy resources.
"Sydney has lost more than 70 percent of native vegetation cover through development," the report said.
Sydney Habour's stormwater drains also created hotspots of pollution with concentrations 20 times higher than when the harbour was pristine.
Also read: Barcelona recruits sheep and goats to fight wildfires
"The findings of this report are heartbreaking, and the leadership failures that have led to loss at this scale devastating," said WWF-Australia acting chief executive Rachel Lowry.
"If we ignore the warnings of this report then iconic species like koalas across eastern Australia, or our largest gliding mammal, the greater glider, will disappear forever on our watch."
WWF-Australia said the report should be a "turning point" that lead to greater investment and stronger laws to protect Australia's wildlife and wilderness.
Lowry urged the new government to act quickly, condemning existing environmental legislation for "failing miserably" to protect threatened species.
The "devastating" new report showed coasts and marine environments were deteriorating, the Australian Marine Conservation Society said.
"We need to do more now, or we put at risk everything we rely on our oceans for—our health, wellbeing, livelihoods and our culture," said the society's chief executive, Darren Kindleysides.
© Agence France-Presse

Tweets by @forbesindia
Should you invest in the stock market right now?
'Fire of Love' charts romance and death of volcano-chasing scientists