Billionaire Lee Jae-yong, who was convicted of bribery and embezzlement in January last year, will be "reinstated" to give him a chance to "contribute to overcoming the economic crisis" of the country, Justice Minister Han Dong-hoon said 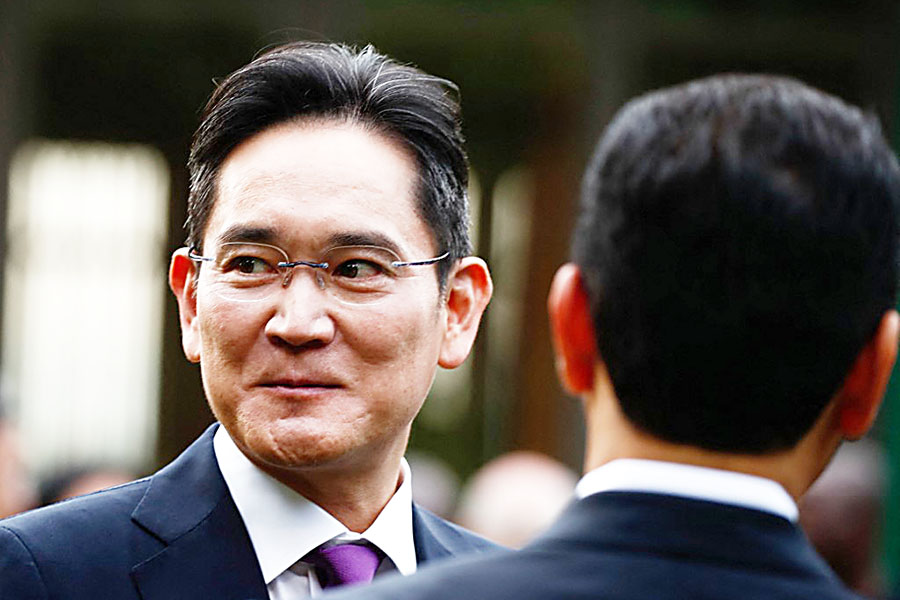 The heir and de facto leader of Samsung group received a presidential pardon Friday, the latest example of South Korea's long tradition of freeing business leaders convicted of corruption on economic grounds.
Billionaire Lee Jae-yong, who was convicted of bribery and embezzlement in January last year, will be "reinstated" to give him a chance to "contribute to overcoming the economic crisis" of the country, Justice Minister Han Dong-hoon said.

Lee — the 278th-richest person in the world, according to Forbes, with a net worth of $7.9 billion — was released on parole in August 2021, after serving 18 months in jail, just over half of his original sentence.
Friday's pardon will allow him to fully return to work by lifting a post-prison employment restriction that had been set for five years.
"Due to the global economic crisis, the dynamism and vitality of the national economy have deteriorated, and the economic slump is feared to be prolonged," the Justice Ministry said in a statement.
The pardon was given so that Lee — as well as other high-level executives receiving pardons Friday — could "lead the country's continuous growth engine through active investment in technology and job creation," the ministry added.
Lee, 54, was pardoned along with three other businessmen, including Lotte Group Chairman Shin Dong-bin, who was sentenced to a suspended two-and-half-year prison term in a bribery case in 2018.
Also read: As young blood enters South Korean politics, new—and old—barriers emerge
A total of 1,693 people — including prisoners with terminal illnesses and those near the end of their terms — were on the pardon list, the ministry said, ahead of the annual Liberation Day anniversary Monday.
The anniversary marks Japan's 1945 World War II surrender, which liberated Korea from decades of colonial rule and is typically celebrated each year with the pardon of hundreds of prisoners.

Lee is the vice-chairman of Samsung Electronics, the world's biggest smartphone maker.
The conglomerate's overall turnover is equivalent to about one-fifth of South Korea's gross domestic product.
He was jailed for offences connected to a massive corruption scandal that brought down former president Park Geun-hye.
There is a long history of top South Korean tycoons being charged with bribery, embezzlement, tax evasion or other offences.
But many of those convicted have subsequently had their sentences cut or suspended on appeal, with some — including late Samsung chairman Lee Kun-hee, who was convicted twice — receiving presidential pardons in recognition of their "contribution to the national economy".
The giant Samsung group is by far the largest of the family-controlled empires known as chaebols that dominate business in South Korea, the world's 12th-largest economy.
Also read: 2022 Family Businesses
President Yoon Suk-yeol said Friday that the pardons were aimed at improving the lot of "ordinary people who have been affected by the prolonged Covid-19 pandemic". "I hope this special pardon will serve as an opportunity for all South Koreans to work together to overcome the economic crisis," he added.
But analysts said the pardons simply allowed major businessmen to feel they were not "constrained by any legal norms", Vladimir Tikhonov, professor of Korean studies at the University of Oslo, told AFP.
"And the government is more or less doing their bidding and creating conditions for capital accumulation by corporations," he added.

Lee still faces a separate trial over accusations of accounting fraud regarding a merger of two Samsung firms in 2015.
In May, he was excused from a hearing in that trial to host US President Joe Biden when he kicked off a tour of South Korea by visiting Samsung's chip plant, alongside President Yoon.
His pardon follows Samsung unveiling a massive 450 trillion won ($356 billion) investment blueprint for the next five years, aimed at making it a frontrunner in a wide range of sectors — from semiconductors to biologics — and creating 80,000 new jobs.
The firm also employs about 20,000 people in the United States, and work is under way to build a new semiconductor plant in Texas, scheduled to open in 2024.
Also read: US, EU to boost coordination on semiconductor supply, Russia
But Lee's imprisonment has been no barrier to the firm's performance — it announced a surge of more than 70 percent in second-quarter profits in July last year, with a coronavirus-driven shift to remote work boosting demand for devices using its memory chips.
"Samsung operated perfectly well without any pardon," Tikhonov told AFP. "The pardon weakens rule of law, which potentially is, in fact, more detrimental than advantageous to the operations of any market-based economy."