Young blood is entering South Korean politics in droves after lawmakers this year lowered the minimum age limit for political office to 18 from 25. Among the 4,131 people who won their races, 11 were under 24 years old, including the youngest election winner in the country's history, a 19-year-old, but problems as old as politics itself are slowly emerging 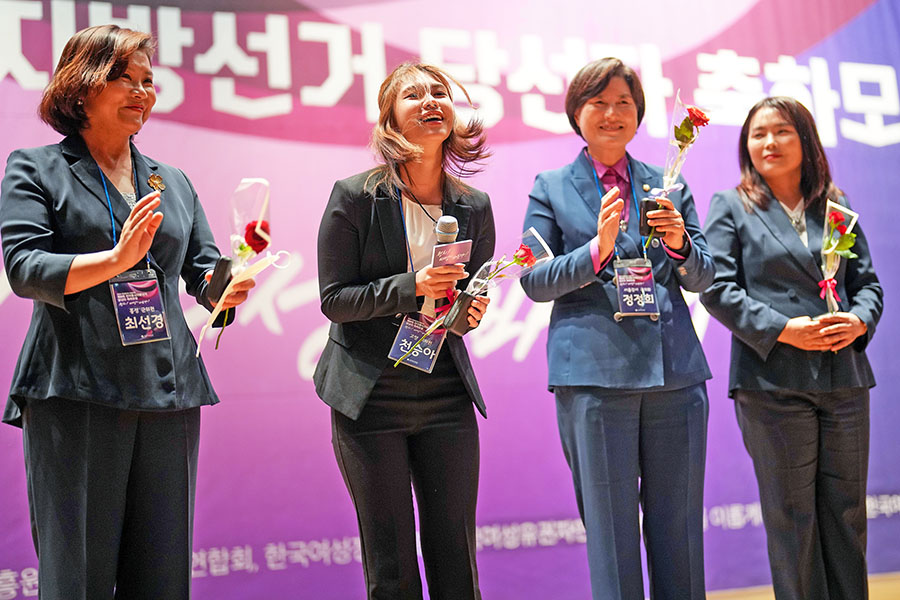 Cheon Seung-ah, 19, second from left, at a gathering organized by the Korea Women Parliamentarian Network in Seoul, South Korea, on June 15, 2022. In June, she became the youngest election winner in South Korea’s history. A new law allowed a record number of young people to run in local elections this year. But they face skepticism, cultural hurdles and problems as old as politics itself. (Chang W. Lee/The New York Times)

SEOUL, South Korea — Jung Seong-hoon, 22, shared the frustrations of young South Koreans looking at a bleak future: Jobs are scarce, rent is high, and debt is climbing. So last month, he ran for a spot on his local city legislature and won.

Jung exemplifies the young blood entering South Korean politics in droves after lawmakers this year lowered the minimum age limit for political office to 18 from 25. That led to a record number of people under 40 running in local elections in June — 416 candidates, up from 238 in 2018. Among the 4,131 people who won their races, 11 were under 24 years old, including the youngest election winner in the country’s history, a 19-year-old.

But even before their terms began Friday, they encountered problems as old as politics itself. They say they face a political ecosystem dominated by politicians in their 50s and 60s who are out of touch, a prohibitively high bar for fundraising and an opaque network of party officials whose favor they must curry to stand a chance.

They must navigate strict cultural barriers (one’s social standing is determined in large part by one’s age) and deal with an older electorate that sometimes dismiss them as “inexperienced” and “gullible,” some complain.

“There is an expectation that young people will contribute to bettering the world, but a lot of people raise concerns about our young age,” said Lee Ja-hyung, 23, who was elected to the assembly in Gyeonggi province near Seoul. “They’re concerned that our sense of judgment hasn’t been fully developed and we might be too easily swayed by people around us.”

That makes it harder for the young hopefuls to receive the nomination of a major political party, which often requires them to be personally acquainted with party officials. In the conservative People Power Party, local party council chairs hold the power to nominate a candidate. In the liberal Democratic Party, candidates must not only be nominated, but also win in primaries to stand in the election.

“There was a fixed idea that politics is for adults, according to a long-established Confucian culture,” said Noh Woong-rae, 64, a member of the National Assembly.

The age limit for national political candidates is 25 in many Asian countries, including Japan, India, the Philippines and Thailand. In Hong Kong and Singapore, the limit is 21, and in Taiwan, it is 23. In the United States, a person must be 30 or older to be a senator and 25 or older to be a representative. Only a few teenagers have been elected to American state legislatures or have run for seats in city councils. A handful of countries, including Germany, allow 18-year-olds to run for a national legislative chamber.

In South Korea, Noh was among the lawmakers who campaigned to lower the minimum age limit for candidates, arguing that the candidacy age should match the voting age, which had been 20 since 1960. Others wanted to remove age limits altogether.

Also see: Uttar Pradesh Elections 2022: The many moods, colours and voices behind the votes

The movement to change the law was tied to the student-led democratic protests of 1987. Activists said they wanted to dispel the notion that political participation should be reserved for the elite, an idea dating to the military dictatorship of Park Chung-hee.

The effort succeeded in stages: The voting age was lowered to 19 in 2005. In 2019, the National Assembly approved lowering it again, to 18. Then this year, lawmakers lowered the age limit to run for office.

“It’s nice to have some experience or knowledge, but I don’t think politics necessarily requires a huge level of it,” said Park Joo-min, 48, another assemblyman.

Despite the change, Jung, the 22-year-old elected to the Yangsan city assembly in South Gyeongsang province, said that speaking to a party official to try to get nominated “felt like beating my head against the wall.” (He campaigned on a promise to help strengthen the city’s transportation infrastructure.)

Fundraising is also especially challenging, with some candidates saying they had to come up with about 20 million won (about $15,400) to run successful campaigns.

For Cheon Seung-ah, 19, the youngest elected politician, winning came at a price. She had been nominated by her local party council’s chair, Kim Hyun-ah, 52, amid a push to get more young women involved with the People Power Party. (Many members had been accused of amplifying anti-feminist slogans.)

In an interview, Cheon had described hopes of expanding enrichment programs for the city’s children and improving the municipal transit system. Then, after she won, members of her own party council, including some women who had been vying for a nomination to her seat, launched an attack. According to a complaint signed by six members of the council, she had claimed on her résumé a nonexistent title on the council’s young adult committee.

The complaint was accepted by the Seoul Central District Prosecutors Office.

Prosecutors are also investigating dozens of other winners from the June elections. Attacks are common against candidates whose nomination by a local party council chair played a big part in their election victory, like Cheon. It is easy to challenge their legitimacy because their win is viewed as less democratic. But few of those attacks have formally been accepted as legal complaints.

Cheon has denied the claim, saying, “The hardest part was the toll that the attacks took on my mental health.”

Kim has also rebutted the suggestion that there was anything untoward about her protégé’s title. Under the party’s rules, Kim said, she had the sole prerogative to appoint people to the council and to give them titles. “I have no obligation to ask the members of the council for permission or to notify them,” she said.

One of Cheon’s challengers, Lee Kang-hwan, who was the council’s deputy chair, said he had quit upon learning that she was the nominee. He also said he had hoped she would resign.

On Friday, Cheon began her term as the youngest city assemblywoman in Goyang. As of Monday, the prosecutors had assigned a police department to investigate her case.