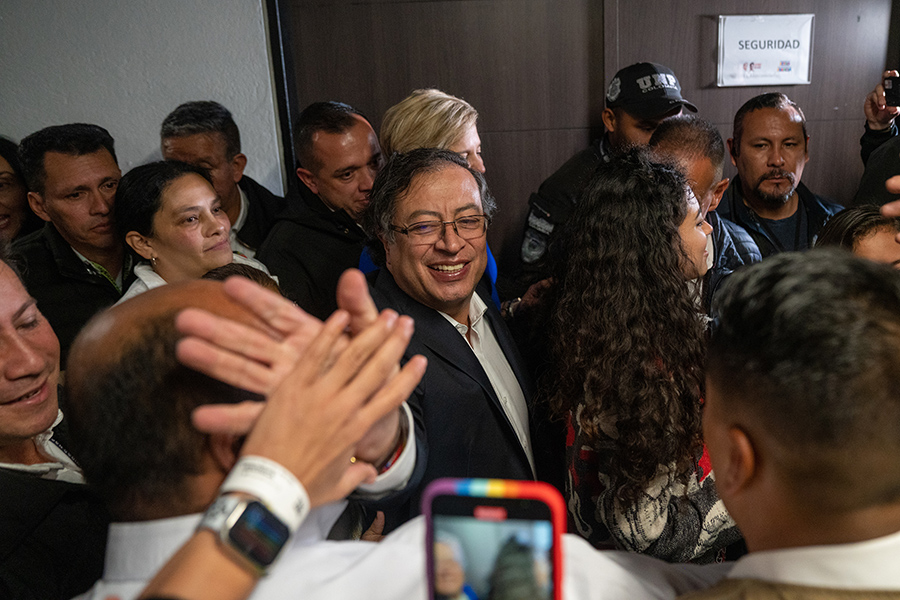 Gustavo Petro celebrates after winning the presidential election in Bogotá, Colombia, on Sunday, June 19, 2022. Petro, a former rebel and a longtime senator who has pledged to transform the country’s economic system, has won Sunday’s election, according to preliminary results, setting the third largest nation in Latin America on a radically new path. (Federico Rios/The New York Times)

BOGOTÁ, Colombia — For the first time, Colombia will have a leftist president. Gustavo Petro, a former rebel and a longtime legislator, won Colombia’s presidential election Sunday, galvanizing voters frustrated by decades of poverty and inequality under conservative leaders, with promises to expand social programs, tax the wealthy and move away from an economy he has called overly reliant on fossil fuels.

His victory sets the third-largest nation in Latin America on a sharply uncertain path, just as it faces rising poverty and violence that have sent record numbers of Colombians to the United States border; high levels of deforestation in the Colombian Amazon, a key buffer against climate change; and a growing distrust of key democratic institutions, which has become a trend in the region.

Petro, 62, received more than 50% of the vote, with more than 99% counted Sunday evening. His opponent, Rodolfo Hernández, a construction magnate who had energized the country with a scorched-earth anti-corruption platform, won just over 47%.

Shortly after the vote, Hernández conceded to Petro.

“Colombians, today the majority of citizens have chosen the other candidate,” Hernández said. “As I said during the campaign, I accept the results of this election.”

“This story that we are writing today is a new story for Colombia, for Latin America, for the world,” Petro said. “We are not going to betray this electorate.”

He pledged to govern with what he has called “the politics of love,” based on hope, dialogue and understanding.

Just over 58% of Colombia’s 39 million voters turned out to cast a ballot, according to official figures.

The victory means that Márquez, an environmental activist who rose from poverty to become a prominent advocate for social justice, will become the country’s first Black vice president.

Petro and Márquez’s victory reflects an anti-establishment fervor that has spread across Latin America, exacerbated by the pandemic and other long-standing issues, including a lack of opportunity.

“The entire country is begging for change,” said Fernando Posada, a Colombian political scientist, “and that is absolutely clear.”

In April, Costa Ricans elected to the presidency of Rodrigo Chaves, a former World Bank official and political outsider, who took advantage of widespread discontent with the incumbent party. Last year, Chile, Peru and Honduras voted for leftist leaders running against candidates on the right, extending a significant, multiyear shift across Latin America.

As a candidate, Petro had energized a generation that is the most educated in Colombian history, but is also dealing with 10% annual inflation, a 20% youth unemployment rate and a 40% poverty rate. His rallies were often full of young people, many of whom said they feel betrayed by decades of leaders who had made grand promises but delivered little.

“We’re not satisfied with the mediocrity of past generations,” said Larry Rico, 23, a Petro voter at a polling station in Ciudad Bolívar, a poor neighborhood in Bogotá, the capital.

Petro’s win is all the more significant because of the country’s history. For decades, the government fought a brutal leftist insurgency known as the Revolutionary Armed Forces of Colombia, or FARC, with the stigma from the conflict making it difficult for a legitimate left to flourish.

But the FARC signed a peace deal with the government in 2016, laying down their arms and opening space for a broader political discourse.

Petro had been part of a different rebel group, called the M-19, which demobilized in 1990 and became a political party that helped rewrite the country’s constitution. Eventually, Petro became a forceful leader in the country’s opposition, known for denouncing human rights abuses and corruption.

On Sunday, in a wealthy part of Bogotá, Francisco Ortiz, 67, a television director, said he had also voted for Petro.

“It’s been a long time since we had an opportunity like this for change,” he said. “If things will get better, I don’t know. But if we stick with the same, we already know what we’re going to get.”

The win could also test the United States’ relationship with its strongest ally in Latin America. Traditionally, Colombia has formed the cornerstone of Washington’s policy in the region.

But Petro has criticized what he calls the United  States’ failed approach to the drug war, saying it has focused too much on eradication of the coca crop, the base product in cocaine, and not enough on rural development and other measures.

About 2 million Venezuelan migrants have fled to Colombia in recent years amid an economic, political and humanitarian crisis.

Petro believes the economic system is broken, overly reliant on oil export and a flourishing and illegal cocaine business that he said has made the rich richer and poor poorer. He is calling for a halt to all new oil exploration, and a shift to developing other industries.

He has also said he will introduce guaranteed work with a basic income, move the country to a publicly controlled health system and increase access to higher education, in part by raising taxes on the rich.

“What we have today is the result of what I call ‘the depletion of the model,’ ” Petro said in the interview this year, referring to the current economic system. “The end result is a brutal poverty.”

Petro's critics, including former allies, have accused him of arrogance that leads him to ignore advisers and struggle to build consensus. When he takes office in August, he will face a deeply polarized society where polls show growing distrust in almost all major institutions.

He has vowed to serve as the president of all Colombians, not just those who voted for him.

On Sunday, at a high school-turned-polling station in Bogotá, Ingrid Forrero, 31, said she saw a generational divide in her community, with young people supporting Petro and older generations in favor of Hernández.

Her own family calls her the “little rebel” because of her support for Petro, whom she said she favors because of his policies on education and income inequality.

“The youth is more inclined toward revolution,” she said, “toward the left, toward a change.”