While the former president's son-in-law had arguably been the most influential adviser to the president through four years, he chose at that pivotal moment to focus instead on his personal project of Middle East diplomacy 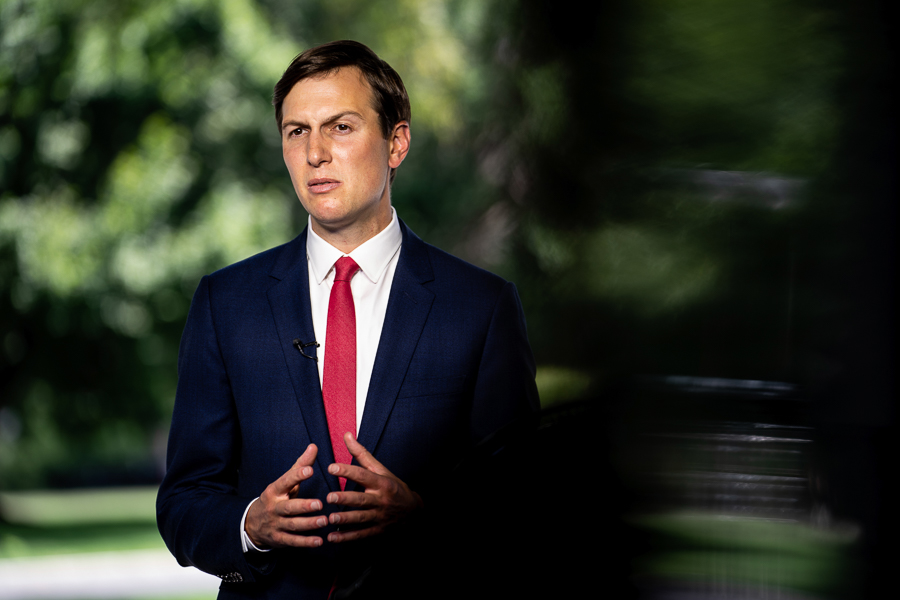 Jared Kushner, then a senior advisor to President Donald Trump, speaks during a television interview at the White House in Washington on Aug. 14, 2020. The role played by Kushner could come into sharp relief once the congressional committee investigating the Jan. 6, 2021, attack on the Capitol opens public hearings this week. (Erin Schaff/The New York Times)


WASHINGTON — On Nov. 5, 2020, barely 24 hours after President Donald Trump claimed that “frankly, we did win this election,” Jared Kushner woke up and announced to his wife that it was time to leave Washington. “We’re moving to Miami,” he said.

The election had not even been called for Joe Biden, but as Kushner later told the story to aides and associates, the White House’s young power couple felt no need to wait for the official results. They saw which way the votes were going and understood that the president had lost his bid for a second term.

No matter how vociferously Trump claimed otherwise, neither Kushner nor Ivanka Trump believed then or later that the election had been stolen, according to people close to them. While the president spent the hours and days after the polls closed plotting a strategy to hold on to power, his daughter and son-in-law were already washing their hands of the Trump presidency.

Their decision to move on opened a vacuum around the president that was filled by conspiracy theorists like Rudy Giuliani and Sidney Powell, who relayed to Trump false stories of dead voters, stuffed ballot boxes, corrupted voting machines and foreign plots. Concluding that the president would not listen even to family members urging him to accept the results, Kushner told Trump that he would not be involved if Giuliani were in charge, according to people he confided in, effectively ceding the field to those who would try to overturn the election.

While the president’s son-in-law had arguably been the most influential adviser to the president through four years, he chose at that pivotal moment to focus instead on his personal project of Middle East diplomacy. He returned to the region to meet with figures who would also be helpful to him later in making money after leaving the White House.

The role Kushner played could come into sharp relief once the congressional committee investigating the Jan. 6, 2021, attack on the Capitol opens public hearings this week. The committee interviewed Kushner and plans to show video excerpts from his testimony along with Ivanka Trump’s.

Kushner’s activities in his final months in the White House are now also coming under the scrutiny of another Democratic-run House committee investigating whether he used his position to secure a $2 billion investment in his new private equity firm from a prominent Saudi Arabian wealth fund. Kushner has said he abided by all legal and ethical guidelines while in public service.

This account of Kushner’s post-election activities is based on interviews with a wide array of figures close to him and the former president for a forthcoming book by this reporter and Susan Glasser of The New Yorker magazine called “The Divider: Trump in the White House, 2017-2021,” to be published by Doubleday on Sept. 20. Nearly all of those who spoke requested anonymity to discuss private conversations and meetings.

During his four years in the White House, Kushner positioned himself as the measured alter ego to a volatile president. But in fact, Kushner became strategic in his interventions, having been burned by early efforts that blew up in his face.

Kushner developed his own techniques for handling Trump. One key, he told others, was feeding the president good news, even if it was in short supply. Kushner came up with a mathematical formula for his brand of Trump management: 2-to-1. Any phone call, any meeting should include this good-news-to-bad-news ratio. He similarly made a habit of telling Trump to add 5 points to any bad poll, rationalizing that traditional surveys missed many Trump voters anyway.

Having watched dozens of senior officials come and go, Kushner realized the essential element of survival: never forgetting it was Trump’s show, Trump’s party, Trump’s way. “You have to realize you don’t make the waves,” Kushner advised other officials. “He makes the waves. And then you have to do your best to kind of stay on the surfboard.”

Kushner the surfer had come to recognize when the waves were too rough — as they were after Election Day 2020. He understood that his father-in-law would not concede right away and would ask for recounts and file lawsuits, but he believed that even if there were some irregularities, it was mainly a way of soothing a wounded ego and explaining defeat.

To Kushner, his father-in-law’s decision to turn once again to Giuliani was a red flag. As far as Kushner was concerned, Giuliani was an erratic schemer who had already gotten Trump impeached once because of his political intriguing in Ukraine. But instead of fighting Giuliani for Trump’s attention, Kushner opted out entirely.

He and Ivanka Trump began making plans. They ruled out returning to New York. Like Donald Trump, who had officially become a Florida resident in 2019, they had soured on their former home just as it had soured on them. Miami, on the other hand, seemed exciting and new.

In what remaining time he had in the White House, Kushner wanted to focus on expanding the Abraham Accords, the agreement establishing diplomatic relations between Israel and several Arab states, an achievement that he felt validated his whole time in Washington. Two other countries, Morocco and Sudan, signed on to the accords during the period between the election and Biden’s inauguration.

The post-election fraud claims quickly exposed a rift within the Trump family. On the same day Kushner woke up to declare it was time to move to Miami, his brother-in-law Donald Trump Jr. was already pushing the president’s team to fight to stay in power. He sent a text to Mark Meadows, the White House chief of staff, outlining a plan to override the verdict of the voters by having Republican legislatures in states won by Biden invalidate the results and send Electoral College votes for Trump when Congress counted them Jan. 6.

How much Kushner knew about that at the time remains unclear, but he did not express serious concern about how far the effort to hang on to power would go. He sent word to Sen. Mitch McConnell of Kentucky, the Republican majority leader, that Trump would eventually accept the reality that he lost.

“We’ll get through it. Bear with us,” Kushner told Josh Holmes, a former chief of staff and campaign manager for McConnell who would pass along the message. “We’ve got a couple of challenges that have some merit. We’ll see how they go, but there’s a pretty good chance we come up short.” And once the Electoral College voted Dec. 14, he suggested, that would be the end of it.

While Kushner was often called the president’s shadow chief of staff, the man who held the actual title, Meadows, was encouraging the conspiracy theorists seeking to overturn the election, acting less as a gatekeeper than a door opener, letting practically anybody who wanted to come into the Oval Office.

Among them were lawyers and others arguing that Vice President Mike Pence could stop Biden from being formally recognized as the winner in his role overseeing the counting of the Electoral College votes in Congress. Pence concluded he had no such power, but that did not stop Trump from keeping up the pressure.

Finally, seeing the collision that was coming, Marc Short, the vice president’s chief of staff, tried to enlist help from Kushner, calling him to ask him to get his father-in-law to stand down. “Look, can you help us with this?” Short asked.

But Kushner brushed him off. “Look, when Rudy got involved, I stopped being involved,” he told Short. The vice president “is a big boy,” and if he disagreed with the president on a legal issue, he should bring in his lawyers. “I’m too busy working on Middle East peace right now, Marc.”

Indeed, in the days leading up to Jan. 6, Kushner was in the Middle East brokering a rapprochement between Saudi Arabia and Qatar to end a three-year blockade of the small Gulf state. He was on a plane back to Washington when Trump’s mob stormed the Capitol.

After arriving home, Kushner’s phone rang. Rep. Kevin McCarthy of California, the House Republican minority leader, was on the line asking Kushner to persuade the president to do something. “We need help!” McCarthy insisted. Kushner rushed to the White House.

Ivanka Trump had spent much of the day trying to keep her father from going too far. She had refused to address the rally on the Ellipse but at the last minute was so concerned by her father’s anger toward Pence that she decided to accompany him there in hopes of avoiding a worse clash. As rioters rampaged through the Capitol, she hoped to persuade her father to issue stronger statements calling off the attackers.

By the time Kushner arrived at the White House, his wife had gotten her father to release a video telling supporters to go home. But even then, he repeated his lies about the “fraudulent election” and expressed solidarity with the rioters, telling them, “We love you, you’re very special.” Kushner quickly concluded there was little more he could do at that point.

On Jan. 20, Kushner and Ivanka Trump attended the farewell ceremony for the departing president and accompanied him on Air Force One to Florida. Trump was heading into exile, prepared to keep waging war on Biden and the system.

Kushner and Trump would have nothing to do with that. They were moving on to their new life.

Tweets by @forbesindia
EU makes USB-C the standard, in a blow to Apple; new glitches in Infosys-developed tax portal
India is home to 1.5 million NFT users; sixth in the world