How Biden won the Presidency

Joseph R. Biden Jr. campaigned as a sober and conventional presence, concerned about the "soul of the country." He correctly judged the character of the country, and benefited from President Trump's missteps 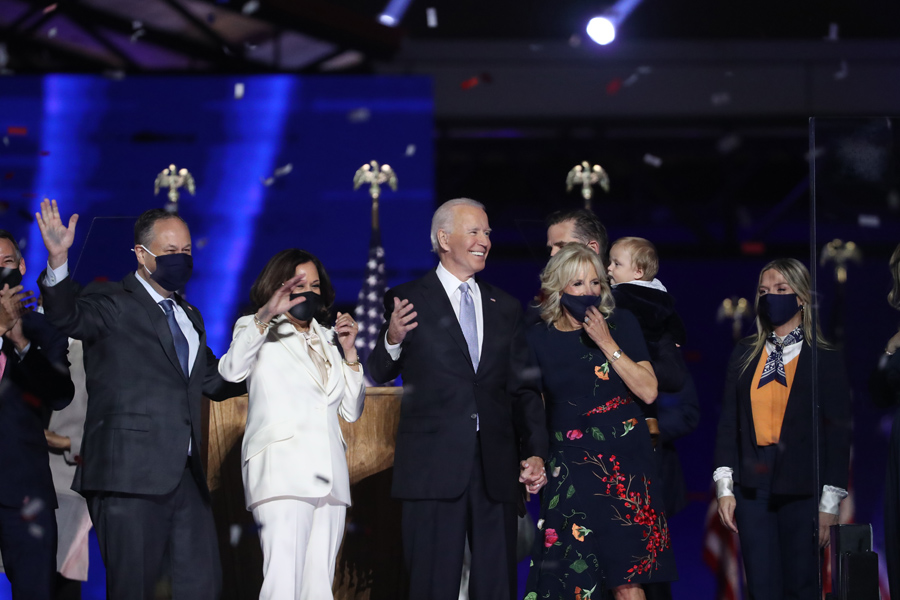 On a January evening in 2019, Joe Biden placed a call to the mayor of Los Angeles, Eric Garcetti, a personal friend and political ally who had just announced that he would not pursue the Democratic nomination for president.

During their conversation, Garcetti recalled, Biden did not exactly say he had decided to mount his own campaign. The former vice president confided that if he did run, he expected President Donald Trump to “come after my family” in an “ugly” election.

But Biden also said he felt pulled by a sense of moral duty.

“He said, back then, ‘I really am concerned about the soul of this country,’” Garcetti said.

Twenty-one months and a week later, Biden stands triumphant in a campaign he waged on just those terms: as a patriotic crusade to reclaim the U.S. government from a president he considered a poisonous figure. The language he used in that call with Garcetti became the watchwords of a candidacy designed to marshal a broad coalition of voters against Trump and his reactionary politics.

It was not the most inspirational campaign in recent times, nor the most daring, nor the most agile. Biden campaigned as a sober and conventional presence, rather than as an uplifting herald of change. For much of the general election, his candidacy was not an exercise in vigorous creativity, but rather a case study in discipline and restraint.

In the end, voters did what Biden asked of them and not much more: They repudiated Trump, while offering few other rewards to Biden’s party. And by a popular vote margin of 4 million and counting, Americans made Biden only the third man since the World War II to topple a duly elected president after just one term.

Throughout his campaign, Biden faced persistent doubts about his political acuity and the relevance, in the year 2020, of a set of union-hall-meets-cloakroom political instincts developed mainly in the previous century.

But if Biden made numerous errors along the way, none of them mattered more in this election than the essential rightness of how he judged the character of his party, his country and his opponent. This account of his candidacy, based on interviews with four dozen advisers, supporters, elected officials and friends, reveals how fully Biden’s campaign flowed from his own worldview and political intuition.

During the primaries, Biden rebuffed pressure to move to the left, believing his party would embrace his pragmatism as its best chance to beat Trump. In the general election, Biden made Trump’s erratic conduct and mismanagement of the coronavirus pandemic his overwhelming themes, shunning countless other issues as needless distractions.

While some Democrats urged him to compete in a wider array of battlegrounds, Biden put the Great Lakes states at the center of his electoral map, trusting that with an appeal to the political middle he could rebuild the so-called Blue Wall and block Trump’s path to a second term.

Perhaps most importantly, Biden believed that no issue would figure larger in voters’ minds than Trump’s presence in the Oval Office. And if he could make the election an up-or-down vote on an out-of-control president, he believed he could win.

On that score, he was right. As voters sized up Biden as a potential president, his familiar flaws and foibles paled against the conduct of an incumbent sowing racial division, threatening to deploy troops in U.S. cities and floating the idea of injecting disinfectant as a coronavirus treatment.

Anita Dunn, one of Biden’s closest advisers, said the campaign had been propelled all along by the candidate himself, and his unwavering theme and strategy.

“It was his campaign,” Dunn said. “It was less consultant-driven than any presidential campaign in modern history.”

Still, at the outset, Biden’s political theory of the case struck even some of his loyal allies as misguided in an era of intense ideological polarization.

Sen. Bob Casey of Pennsylvania recalled a meeting he had with the former vice president in March 2019, shortly before Biden entered the race. As Biden sketched out his approach, Casey, a Democrat, was not fully convinced.

“He was walking through what became his broader-based theme, about the soul of the country,” Casey said. “I was worried at the time that it wasn’t hard-hitting enough.”

But Biden, he said, “was prescient in his ability, even in the primaries when almost nobody else was doing it, to say, ‘We have to bring the country back together.’”

While many voters found Trump distasteful, or worse, it is difficult to unseat an incumbent president and Trump had the benefit of a nation in relative peace and steady prosperity. Biden’s primary opponents, who argued that a message of normalcy and steady experience might not be enough to win, seemed to have a point.

Then, just as Biden was seizing a clear upper hand in the Democratic nomination fight, the coronavirus pandemic struck. In a matter of days, public campaigning froze and a mood of fear and gloom set in across the country.

Gov. Gretchen Whitmer of Michigan, a close ally of Biden, said it was not immediately obvious that the Trump administration would effectively forfeit the issue of public health to Biden. The White House, Whitmer said, “really could have risen to the occasion.”

But as Trump dismissed the threat of the pandemic, and railed against governors like Whitmer for locking down their states, Biden moved to assert himself as an alternative leader. He began to sketch his own approach to addressing the disease and to show voters how he might operate in Trump’s place.

From the confines of his lakeside home in Wilmington, Delaware, he received frequent briefings about the pandemic and the economic damage it was inflicting, drafted policy plans and reached out to state and city leaders to gather information.

“He was calling to say, ‘How are things going in Michigan? What do you need?’” Whitmer said.

What Biden was not doing, to the dismay of some in his party, was traveling the country and campaigning in person.

Biden’s first major trip outside Delaware was not for a traditional campaign trip but to confront another crisis: the national reckoning over police brutality after the killing of George Floyd. Flying to Houston to visit the Floyd family, Biden sat for two hours as he listened to the grieving family and told them that while he had never experienced loss quite like theirs, he knew what it meant to lose a child and felt their pain, according to the Rev. Al Sharpton, who was present.

Over the summer, Biden chose a running mate who he hoped would reconcile the competing pressures on his candidacy: to excite his own party without creating new vulnerabilities that Republicans might be able to exploit. He settled on Sen. Kamala Harris of California, completing his ticket with a choice that was at once groundbreaking and cautious — a younger woman of color who largely shared his own pragmatic political instincts.

The Blue Wall and the Blue Line

The most perilous moment of the race for Biden may have come in late August, when a season of racial-justice protests had given way to spasms of vandalism and arson in a handful of politically important states. In Wisconsin, after the shooting of Jacob Blake, a Black man, by a police officer in Kenosha, rioting erupted in the suburban city — and Trump went on the attack.

At the Republican nominating convention, the president and his allies pounded Biden for a week with false or overstated attacks, linking him both to outright criminals and to left-wing activists who had taken up “defund the police” as a slogan. Biden had disavowed the idea, but Republicans persisted.

The onslaught posed a distinctive challenge to Biden, threatening to weaken his coalition of racial minorities, young liberals and moderate whites. Trump began a scare campaign aimed in part at white women, telling them he would “save your suburbs” from what he portrayed as looting mobs that Biden would not control.

Biden flew to Pittsburgh the following Monday to head off Trump’s attacks. In a 24-minute speech, he reaffirmed his support for police reform while sternly denouncing civil unrest.

“Looting is not protesting," he said. “We need justice in America. We need safety in America."

The Biden campaign turned a clip from the speech into a television ad and ran it at saturation levels across the electoral map, countering Trump’s claims that a Democratic administration would unleash violent anarchy.

“Joe has always been someone who was able to hold two thoughts together at the same time about law enforcement and racial justice,” said Sen. Chris Coons of Delaware.

Counting to 270
As the election results began coming in Tuesday, a tense mood took hold across much of the Biden campaign. In the first states to report, Florida and North Carolina, Trump was faring several points better than Democratic polling had forecast and considerably ahead of most surveys conducted by the media.

The Biden campaign publicly projected composure, in contrast to Trump’s erratic behavior on Twitter and during late-night remarks from the East Room.

Biden’s inner circle grew increasingly unnerved as the night wore on, and it became clear that the president was running stronger than expected.

Within a matter of hours, Biden’s fortunes had improved as the big cities of the North reported their votes. It would take until Saturday, when Pennsylvania was called in his favor, to confirm that Biden had won more than the 270 Electoral College votes required to claim the presidency.

For all the Democratic jubilation at Trump’s demise, Biden may not entirely share that feeling of pure delight. Rahm Emanuel, who served as President Barack Obama’s chief of staff during the Great Recession, said he warned Biden recently that his reward for winning would be fleeting.

“You’re the dog that caught the car,” Emanuel said, alluding to what awaited Biden in the Oval Office.

The man who would soon be president-elect responded: “Ain’t that the truth.”

Tweets by @forbesindia
Trust & Work Without Doubt— Yik Chan on his journey as an entrepreneur
Who is Vivek Murthy, who could play a key role in Biden's Covid-19 task force?