As Olaf Scholz unveiled his new government Wednesday and prepares to take office next month, one question for Germany and for the whole of Europe and the world is, can he deliver and fill Merkel's very big shoes? 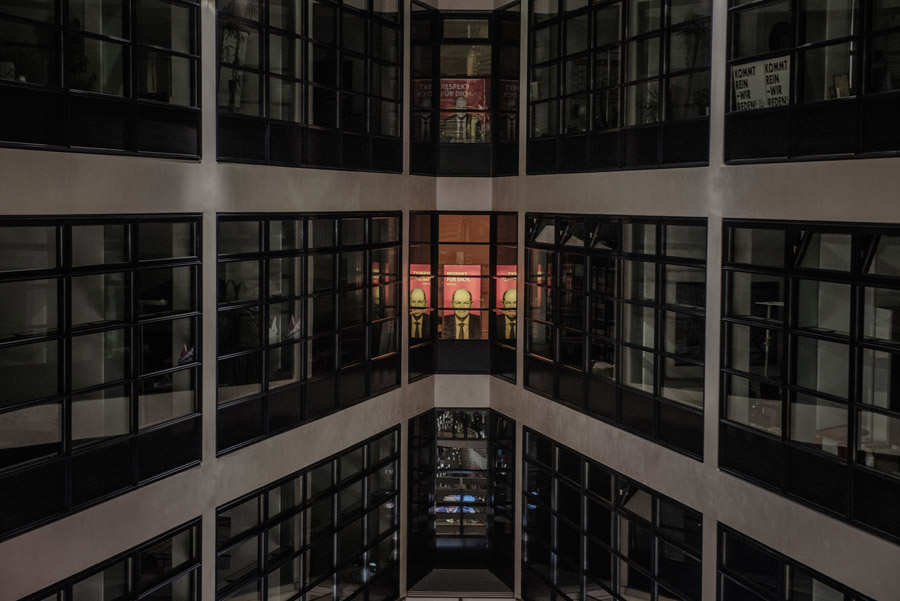 Promotional images of Olaf Scholz on a screen at the headquarters of the Social Democrats in Berlin, Sept. 26, 2021. Germany’s next chancellor is something of an enigma. He comes to power with a dizzying array of challenges, raising questions about whether he can fill the very big shoes of his predecessor. (Laetitia Vancon/The New York Times)

BERLIN — Olaf Scholz succeeded in his campaign to become the next chancellor of Germany primarily by convincing voters that he would be very much like the towering and long-serving figure he will replace: Angela Merkel.

Terse, well-briefed and abstaining from any gesture of triumph, Scholz not only sounded like the outgoing conservative chancellor, he perfected the art of embodying her aura of stability and calm to the point of holding his hands together in her signature diamond shape.

“He’s like a soccer player who studied videos of another player and changed his game,” said Robin Alexander, a long-term political observer of both Merkel and Scholz. “From temperament and political style all the way down to facial expression, Scholz now channels Merkel. If Scholz was a woman, he would wear pantsuits.”

As Scholz unveiled his new government Wednesday and prepares to take office next month, one question for Germany and for the whole of Europe and the world is, can he deliver and fill Merkel’s very big shoes?

Rarely has a German leader come into office with so many burning crises.

As soon as he is sworn in as chancellor in early December, Scholz will have to deal with a surging pandemic, tensions at the Polish-Belarussian border, a Russian president mobilizing troops on Ukraine’s eastern border, a more confrontational China and a less dependable United States.

“The pressure is huge,” said Jana Puglierin of the European Council on Foreign Relations. “The new government is taking office in a situation that has been heating up on multiple fronts. And when it comes to foreign policy, Olaf Scholz remains a bit of an enigma.”

Indeed, which Scholz will show up as chancellor in two weeks is a matter of intense speculation. A lifelong Social Democrat, Scholz, 63, has been a familiar face in German politics for more than two decades and served in two governments led by Merkel’s Christian Democratic Party, most recently as her finance minister.

But he has also been something of a political chameleon, a pragmatic politician who straddles left and right so easily it is sometimes hard to know where he stands.

Born in Osnabrück, northern Germany, Scholz grew up in Hamburg, the city he would later run as mayor. His grandfather was a railway man; his parents worked in textiles. He and his brothers were the first in his family to go to university.

He was still in high school when he joined the Social Democrats. A fiery young Socialist, he spent a decade as a labor lawyer defending workers threatened by factory closures. Then, as secretary-general of his party under the last center-left administration of Chancellor Gerhard Schröder, he defended painful labor market reforms with a machinelike efficiency that earned him the nickname “Scholzo-mat.”

When he was first elected into Parliament, he sat with the left wing of his party. Today he is considered to be to the right of much of its base — not unlike President Joe Biden in the United States, with whom he is sometimes compared.

But like with Biden, some see some leftist reflexes.

Scholz lost his party’s leadership contest to a pair of leftists two years ago but surprised and impressed some of his fiercest critics in his own party when he pulled out a “bazooka” of hundreds of billions of euros in state aid to help struggling workers and businesses during the pandemic.

Some hope that this — and his election campaign theme centered on respect for the working classes — was proof that the youthful idealist who mellowed into a post-ideological centrist might be turning more radical again in his 60s.

“The bazooka was a big moment,” said Kevin Kühnert, an outspoken left-winger and one of the Social Democrats’ deputy leaders. “It was the belated peace with his party. And it was the beginning of a deeper social transformation he’s hoping for.”

Scholz, who reportedly lost 12 kilograms, about 26 pounds, and stopped drinking alcohol before the election, has long been underestimated. He has always played a long game. His ambition to become chancellor dates back to 2011, according to a close ally.

Even political opponents speak admiringly of his political instinct, his stamina and quiet self-belief. Three years ago, when his party’s approval ratings were hovering near record lows, he told The New York Times that the Social Democrats would win the next election.

Like Merkel, he has a reputation for being a safe pair of hands and a decent person with a bipartisan aura.

“Merkel is beyond party politics; she is the voice of reason,” said Alexander, who wrote a bestselling book on the end of the Merkel era. “Being the center of politics as a person, that’s what Merkel did so masterfully, and that’s what Scholz is aiming for.”

That political flexibility may now make him the perfect leader to tackle what may be his abiding challenge as chancellor — keeping the peace in an unusual and untested three-way coalition with two ideologically divergent parties: the progressive Greens, who want to spend 50 billion euros, or about $56 billion, on a green transition; and the pro-market Free Democrats, who will control the finance ministry and with it the purse strings.

But Scholz also runs the risk of satisfying no one. Just how absorbed he gets in having to balance conflicting demands at home, observers say, could affect his ability to push through his government’s ambitious agenda to prepare Germany for a carbon-neutral future and a digital age.

It will also determine how large a role Germany can play abroad. If Scholz gets too distracted by internal tensions, Europe and the world are bound to feel the loss of Merkel’s leadership, analysts predict.

But if things go smoothly, Scholz’ Germany could turn out to be a pivotal power for European cohesion, for more trans-Atlantic unity on fighting climate change and for confronting strategic competitors like China and Russia — and, some hope, for a revival of social democracy in different parts of the world.

Foreign policy was barely discussed in the election campaign, but along with the pandemic, it might well end up dominating the first months of the new administration. Germany is taking over the presidency of the Group of 7 in January, and Scholz will immediately have the spotlight on him on a host of pressing international questions.

Scholz will focus his energy on strengthening the European Union, his advisers say. His first foreign visit will be to President Emmanuel Macron in France, who faces his own difficult election campaign next year. Supporting Macron, who is taking over the European Union’s rotating presidency in January, is one goal.

“A sovereign Europe is the key to our foreign policy,” Scholz said Wednesday. “As the economically strongest and most populous country in the heart of Europe, it is our duty to make this sovereign Europe possible, to promote it and advance it.”

Few analysts expect the new chancellor to change course significantly from Merkel, who took him along to her last Group of 20 meeting last month and introduced him to a number of world leaders, including Biden.