From Watergate to Partygate, shorthand for scandal

Over the past five decades there have been more than 200 -gate scandals, according to a Wikipedia list, and the suffix is used by many without any recollection of the original Watergate 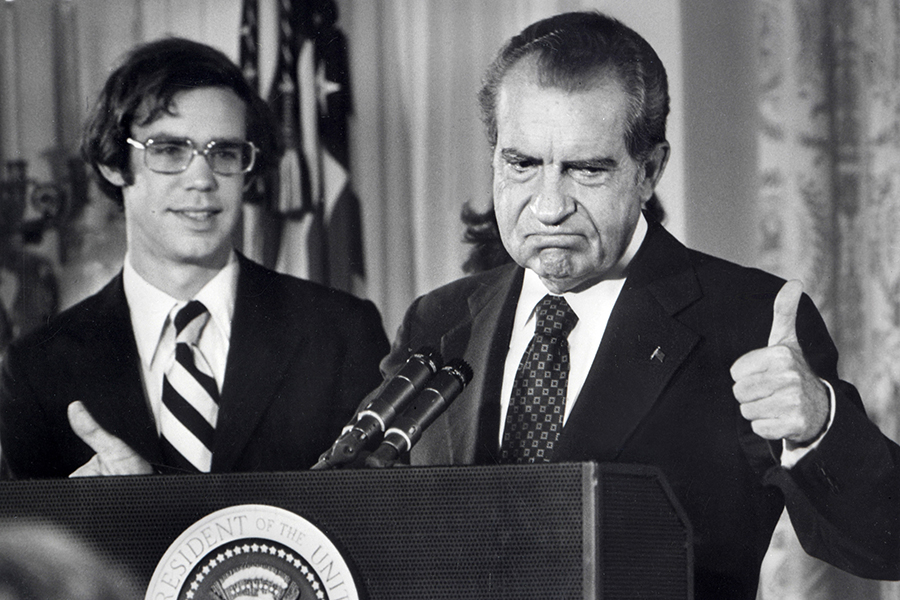 The break-in 50 years ago by Republican operatives at a Washington office led to the historic resignation of US president Richard Nixon—but arguably it reverberated more deeply around the world with the coining of a single term: Watergate.

Ever since the Potomac riverside building lent its name to one of Washington's greatest political crimes, -gate has become the signifier of choice for scandals worldwide—a fact not lost on British Prime Minister Boris Johnson, nearly undone just this year by his own Partygate.

Over the past five decades there have been more than 200 -gate scandals, according to a Wikipedia list, and the suffix is used by many without any recollection of the original Watergate.

Indeed, it was already going global when Nixon, embroiled in a snowballing mess of his own making, was forced to resign the presidency in 1974.

That same year, the shocking news that Bordeaux vintners were doctoring their product was dubbed Winegate.

The year after that, the United Brands company was exposed for paying bribes to the president of Honduras to cut export taxes on fruit: Bananagate.

And then in 1976 Koreagate swept Washington, when US congressmen were shown taking payoffs from a foreign lobbyist.

When in the early 1980s president Ronald Reagan became caught up in the self-made web of secretly selling arms to US enemies in Iran to fund US-backed "Contra" paramilitaries in Nicaragua, pundits experimented with Irangate and Contragate.

But it went down in history as the "Iran-Contra Affair."

In the 1990s Republicans sought their revenge over Watergate by trying to tag the suffix onto any whiff of controversy around president Bill Clinton and his wife Hillary.

More than a dozen—gates came and went around the Clintons, the most famous Troopergate and Travelgate, and finally, Monicagate—from Bill Clinton's affair with intern Monica Lewinsky.

Clinton barely avoided Nixon's fate, yet Monicagate as a term of political shame did not take deep root.

In addition, she added, "Language is fickle."

"Monicagate doesn't roll trippingly off the tongue. It's three syllables."

Gate in Italian is...

Over time -gate as a metonym for scandal spread well beyond American politics.

In 1992 The Sun newspaper published juicy details from phone conversations between Britain's Princess Diana and her close friend James Gilbey.

The shock that someone had been able to eavesdrop on her calls, and that The Sun obtained the recordings and published them, gave rise to a moniker based on Gilbey's affectionate nickname for Diana: Squidgygate.

IPhone maker Apple had its turn with Antennagate. Its iPhone 4, introduced in 2010, lost connections when in the left hand of a user, due to a design flaw that the tech giant denied at first.

And a football scandal first branded Calciopoli was renamed Calciogate.

Perlman said her favorite is the rhyming Deflategate: the allegation that the king of Super Bowls, New England Patriots quarterback Tom Brady, deliberately played in 2016 with underinflated balls to earn an advantage.

Deflategate caught on widely. "Whether you believe Tom Brady or not, it has everything to do with the rhythm of it."

Perlman said the expanded use has watered down the term from its original roots in Nixon-level political scandal, perhaps understandably, as few people under 40 know what Watergate was.

"It's already lost a lot of its political heft ... the presidential disgrace part, because of things like Nipplegate and Deflategate," she said.

Yet it persists. Former president Donald Trump faced Russiagate, Ukrainegate and others, none of which stuck, perhaps because the twice-impeached leader had an surfeit of controversies.

But his across-the-Atlantic contemporary, Johnson, has carried on the tradition.

Early this month he barely escaped the fate of Nixon due to the cover-up scandal of his secret booze-fueled Downing Street bashes during the Covid-19 lockdown: Partygate.