Shares of the microblogging platform fell 11.3 percent to finish at $32.65, with analysts saying Musk's exit places the company in a vulnerable state at a challenging moment for its core business. 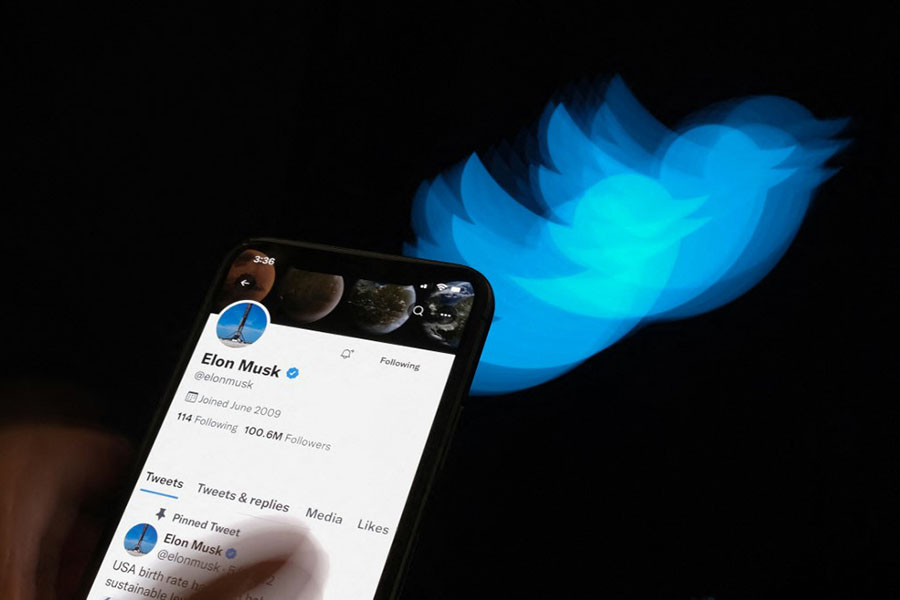 New York, United States: Twitter shares plunged Monday as Elon Musk issued a mocking, defiant commentary about a looming court battle after he ditched a $44 billion buyout of the social media giant.
Shares of the microblogging platform fell 11.3 percent to finish at $32.65, with analysts saying Musk's exit places the company in a vulnerable state at a challenging moment for its core business.
After weeks of threats, Musk on Friday pulled the plug on the deal, accusing Twitter of "misleading" statements about the number of fake accounts, according to a letter from his lawyers included in a US securities filing.
In his first public remarks since the announcement, Musk took to Twitter late Sunday night to troll the company after it said it would sue to enforce the deal.
"They said I couldn't buy Twitter. Then they wouldn't disclose bot info. Now they want to force me to buy Twitter in court. Now they have to disclose bot info in court," he wrote in a tweet, with each of the four statements accompanied by pictures of Musk laughing with increasing glee.
A second tweet showed an image of martial arts star Chuck Norris behind a chess board, which Musk captioned, "Chuckmate."

Twitter offered a fresh rebuttal of its own late Monday, releasing a letter from its legal team to Musk's lawyers that called the Tesla boss's grounds for ending the deal "invalid and wrongful," according to a securities filing.
"Twitter demands that Mr. Musk and the other Musk Parties comply with their obligations under the Agreement, including their obligations to use their respective reasonable best efforts to consummate and make effective the transactions contemplated by the Agreement," said Twitter attorneys at Wachtell, Lipton, Rosen & Katz.
The termination of the takeover agreement Musk inked in April sets the stage for a potentially lengthy court battle with Twitter, which initially opposed a transaction with the unpredictable billionaire entrepreneur.
The original merger agreement contained a $1 billion breakup fee.
Twitter has defended its fake account oversight and said it will sue to force Musk to complete the deal.
Also read: Twitter to share data at heart of Musk deal dispute: report
The social network says the number of fake accounts is less than five percent, a figure challenged by the multi-billionaire who believes the percentage to be much higher.
S&P Global Ratings said Musk's latest move "carries multiple downside risks" for Twitter, pointing to the precariousness of company revenues tied to advertising given rising recession risk.
The ratings agency said there was risk from even a successful recouping of the $1 billion breakup fee.
"While the breakup fee could be credit positive, we believe the negative publicity could harm Twitter's relationships with its advertisers, employees, and investors in all possible scenarios," S&P said.

The latest back-and-forth follows weeks of public squabbling between the sides after Musk amplified the fake accounts issue, causing some analysts to speculate that he was getting cold feet about the deal, which drew criticism from progressive advocacy groups concerned about his political agenda.
Musk's norm-defying conduct has come as little surprise to longtime watchers of the Tesla and SpaceX chief, who are accustomed to a constant stream of statements that flout or test convention and sometimes provoke a crackdown from regulators.
Some market watchers predicted the deal would fall apart shortly after it was announced, but others still saw a way forward on Monday even in the wake of the latest happenings.
"While the two parties likely are facing a lengthy battle of which the final decision remains very uncertain, we believe Twitter may have the stronger case," said Morningstar analyst Ali Mogharabi.
"We also think that a scenario remains where Musk and Twitter reach a new, lower-price agreement."
But Mogharabi lowered his estimate for Twitter shares to $47 from Musk's bid price of $54.20, saying: "We expect Twitter will likely face distractions that set back its efforts to grow revenue and expand margins."
For analyst Dan Ives at Wedbush Securities, "this is a 'code red' situation for Twitter and its Board as now the company will go head to head against Musk in a Game of Thrones court battle."
"We see no other bidders emerging at this time while legal proceedings play out in the courts."
Briefing.com called the disintegration of the Musk deal "a worst-case scenario for the company in the short-to-intermediate term," putting Twitter's "future in limbo and creating a massive distraction."
By John BIERS
© Agence France-Presse