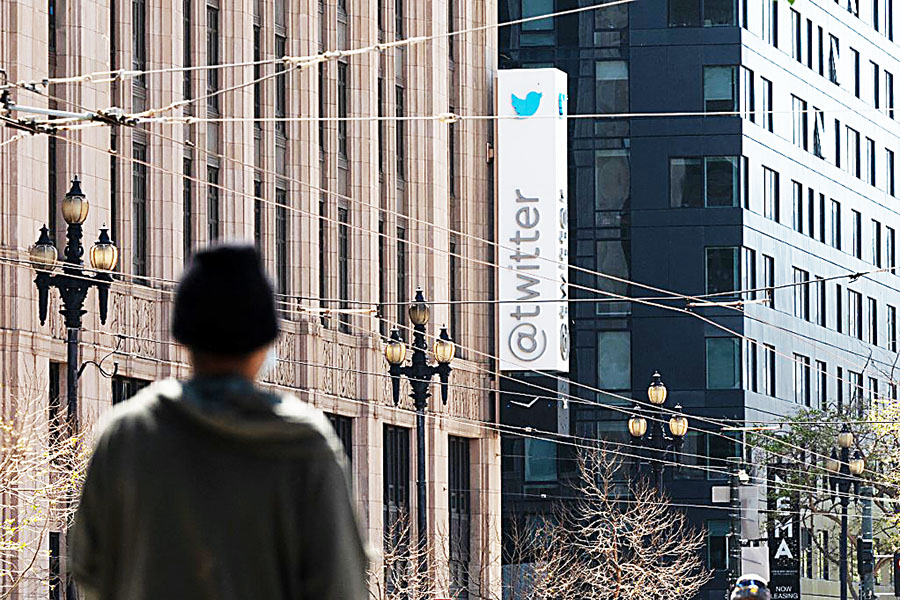 In this file photo taken on April 26, 2022 Twitter headquarters is seen in downtown San Francisco, California. Elon Musk pulled the plug on his deal to buy Twitter on July 8, 2022, accusing the company of "misleading" statements about the number of fake accounts, a regulatory filing showed. Image: Amy Osborne / AFP

San Francisco, United States: Courted and then jilted by the world's richest person, Twitter looks well positioned to win a court battle with Elon Musk over a $1 billion breakup fee and more—but the company will not emerge unscathed.
The entire saga has left observers baffled by what Wedbush analyst Dan Ives described as "one of the craziest business stories ever."
"I think it starts off as a circus show and it's ending as a circus show," Ives told AFP.
Musk, the founder of electric car company Tesla, sent a letter to Twitter on Friday saying he was pulling out of the controversial deal he made in April to buy the platform for $54.20 per share, or $44 billion in total.

But such merger agreements are "designed to prevent buyers from getting cold feet and deciding they want to walk away," explains Ann Lipton, a professor of law at Tulane University who specializes in corporate litigation.
Musk, who also heads SpaceX, has accused the social media giant of "false and misleading representations" about the number of fake accounts on its platform.
His lawyers also point to recent Twitter employee layoffs and hiring freezes, which they say are contrary to the company's obligation to continue operating normally.
Also read: US hits Twitter with $150 million fine over privacy breach
Those arguments may be valid, but they do not merit pulling out of the deal, says Lipton, dismissing them as "nitpicky."
"It's not enough, unless he can show that the representations (about fake accounts) are not just false, but also that they dramatically call the fundamentals of the deal into question," she explains.
"Looks very much like Musk is legally wrong."

That leaves the possibility that the multi-billionaire is actually trying to renegotiate the price down.
This tactic has been used successfully elsewhere, such as by LVMH: two years ago, the global luxury giant broke off a deal to acquire Tiffany before getting a discount.
But experts don't see how Musk and Twitter could agree on a different price at this point, given that the platform's stock has lost more than a quarter of its value since late April.
"Both have a lot to lose," Lipton points out.
If Twitter wins in court, the mercurial entrepreneur will, at a minimum, have to pay a few billion dollars in damages.
At worst, he could be forced to honor his commitment and buy Twitter at a price that has become exorbitant, while his fortune has melted down by tens of billions of dollars in recent months.
But though this would be a victory for shareholders, it would still leave Twitter in Musk's hands—and his libertarian vision of absolute free speech is not aligned with that of many of the employees, users and advertisers on whom the platform's business model depends.
"Twitter is worse off than six months ago, but in the long run, it's better off without him," says Creative Strategies analyst Carolina Milanesi.
"It feels like a toy that a spoiled kid wants, but doesn't really know what to do with, so he would get bored of it, and not give it the attention it deserves, and forget it in a corner ... Twitter would die off slowly and painfully," she predicts.

'Battle on all fronts'

Any court proceedings are expected to last for months, especially since Musk "will drag it out," according to Lipton.
"Twitter is in a strong position," she says.
But Musk, followed by more than 100 million people on the platform, "will try to embarrass them—it will be distracting and demoralizing for employees," she argues.
He has already harassed the platform with highly critical tweets, mockery and outlandish suggestions, encouraged by his many fans.
For Twitter, "it's going be a battle on all fronts—keeping employees, competitors going after their business, brand issues, investors believing the numbers," says Ives, the Wedbush analyst.
Unlike its Silicon Valley neighbors, Twitter has never been a money-making machine, able to turn users' attention into astronomical advertising revenues.
"The past few months have been a huge distraction for Twitter, keeping it from focusing on its business fundamentals," notes Debra Williamson of eMarketer.
"If Musk is able to terminate the deal, Twitter will still be left with the same problems it had before he came on the scene," she says.
"Its user growth is slowing. And while ad revenue is still growing marginally, Twitter is now dealing with a slowing economy that could squeeze ad spending on all social platforms."
By Julie JAMMOT
© Agence France-Presse