Donald Trump means business in India. It is a massive and under-priced market, says the American realty tycoon who was in the country for the launch of his Mumbai project 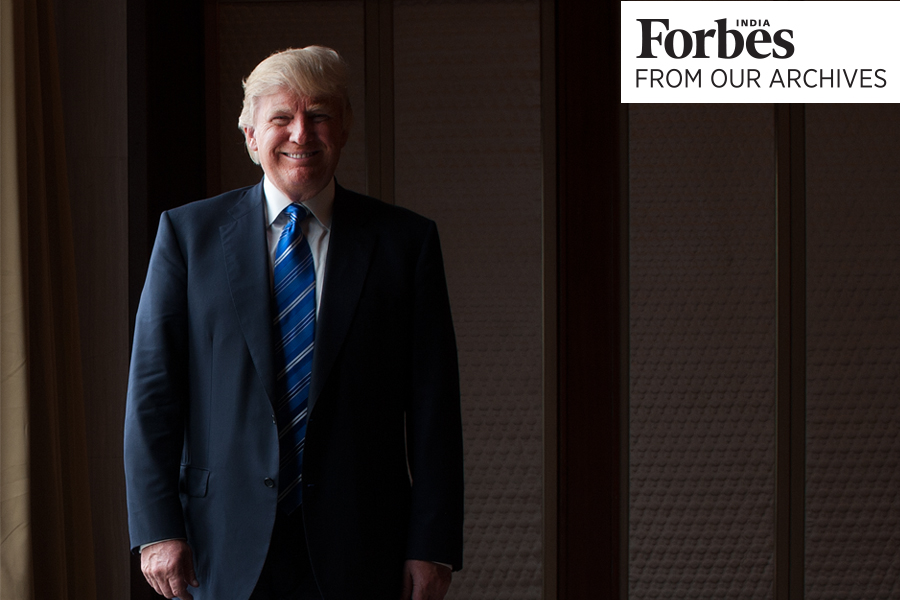 Your real estate is unbelievably cheap,” Donald Trump tells Forbes India. His Indian customers would raise both brows at this assertion. Not only are property prices generally considered unaffordable, consider that the American realty tycoon is currently selling apartments in Trump Tower, Mumbai, in the Rs 9 crore to Rs 18 crore range. These are the best-in-class rates in the country. But he quickly goes on to explain: “Mumbai is a great city and yet it is not priced like other comparable cities. It is priced lower than cities that are less important. That gives investors a tremendous amount of growth potential.”

As a man who has built his empire—and his reputation—through luxury developments across the world, Trump’s name has been drawing the brand-conscious buyer to his India properties. The Trump Organization’s second project in the country, Trump Tower in Mumbai, had sold 100 units even before developers Lodha Group (who have a licensing pact with the Trump Group for the project) could set up a sales office and show prospective buyers a sample apartment. “The association with Trump brings an added layer of global design and service expertise, developed through 40 years in the highly competitive New York market,” says Abhishek Lodha, managing director of the Lodha Group.

The initial flurry of sales has put the project on track to generate $800 million to $1.2 billion in sales (Rs 4,800 crore to Rs 7,200 crore), making it one of the most expensive realty projects in the city. Housed in a 17-acre development in Lower Parel in midtown Mumbai, the 75-storey Trump Tower comes with eight pools, an organic vegetable garden, a tea pavilion, restaurants and gyms, and a 50,000 sq ft club house. “We’ve made sure we paid attention to the smallest details,” says Lodha, its main showrunner. Construction of the tower started in May 2013.

Trump’s first foray into the Indian market was with the Trump Towers project in Pune which is being set up by developers Panchshil Realty, their local partner for this development. The 22-storey building is expected to be ready by 2015 and has received healthy bookings.

For The Trump Organization, Donald Trump Jr did much of the scouting, making over half-a-dozen visits to the country and staking out the main markets. He went to Chennai, Hyderabad, Bangalore, Goa and Delhi-NCR and returned with a favourable impression of their potential: Perhaps the scale may not match that of the Mumbai project, but expect some more announcements soon, the Trumps say.

Trump also runs a hotel business which, he says, is unlikely to play out in India in the foreseeable future. “Your room rates are too low,” he says. However, they are happy to take on hotel management contracts, he adds during a conversation with Forbes India on his recent visit to the country. Excerpts from the interview:

Q. After the recent general elections, there has been a surge of energy in India. What role did that play in further crystallising your plans for this country?
DONALD TRUMP: We were working on the building [Trump Tower, Mumbai] for two years. Buildings are complicated and a time-consuming process. But the prime minister (Narendra Modi) has unified India for the outside world and has done a tremendous job of bringing along factions that were not getting along so well. I give him tremendous credit.

Q. What if the elections had thrown up a government without a clear majority?
TRUMP: If the divisiveness of the last few years had continued, it is possible that this is a job that wouldn’t have started (Trump closed the licensing pact in June this year). This development is important not only for the jobs it creates, but also for the psyche [of the real estate market in Mumbai].

Q. How large a market is India for luxury developments like yours?
TRUMP: It is a massive market. You have the second largest population and will soon have the largest; it is also a very prestigious market. I haven’t researched the market per se but I have looked at the development we are doing and the area we are doing [it in]. Mumbai is a great city and yet it is not priced like other comparable cities. It is priced lower than cities that are less important. That gives investors a tremendous amount of growth potential.

Q. Lodha has already sold 100 units out of 300. Did you expect such a tremendous response?
TRUMP: We do well in developments the world over. The brand sells and we mostly do our own buildings, but when you are this far away, you need to have a local partner. As I joked at the press conference, [not only do] the regulations not permit me to, but also I don’t want to deal with plumber problems from New York! 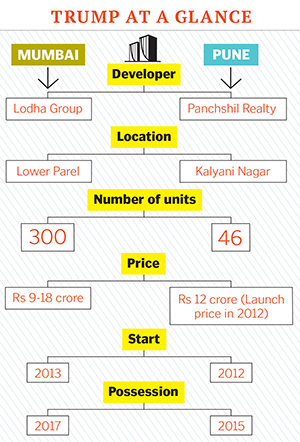 Q. One of the few major markets that you haven’t been to is China. When do you plan to enter the country?
TRUMP: In Trump Tower, I house the largest bank in China—ICBC. A story in Businessweek asked the Chinese what they wanted and Trump emerged among the top 10 brands. We have a number of things happening in China and they will be announced soon. Also, a number of Indian projects could be announced soon.

Q. How much of the nitty-gritty of the planning and construction process do you get into?
DONALD TRUMP JR: For us, the brand is paramount and we have to make sure that the project is being built as per the same standards as we would build our own projects. We have a large team here and in New York. Everything from the amenities to the club house facilities would be a first for Mumbai.

Q. Has there been any interest from overseas Indians in your projects here?
TRUMP: We have a lot of Indians living in our properties in New York and I can see a lot of them buying [here]. I haven’t pitched to them and I don’t need to because it is selling so well. But I can see them buying.

Q. What made you do the Pune project first?
TRUMP: My son is a big fan of the area. He loves India and loves the potential. He liked the people [in Pune] very much and now they are doing a project there.

TRUMP JR: Panchshil (Realty)—its reputation speaks for itself. They are partners with Morgan Stanley all over India and have a history of execution. So yes, it wasn’t necessarily a market that would be chosen for the first project but when you find an incredible site and when they come to you with plans—a building in which every floor has its own apartment—it was a unique opportunity and really fit in with what we were trying to do in terms of the level of luxury. We saw that they could execute and get it done. Also, Pune has 8-9 million people with a diversified economy—technology and auto—and so it is a microcosm of India.

Q. What other cities in India have you looked at?
TRUMP: We are looking at India right now. I can tell you Mumbai will not be our last job.
TRUMP JR: In terms of markets, obviously Delhi is a very natural fit. I have personally been to Chennai, Hyderabad, Bangalore and Goa. Some of these places are not entirely ready for luxury but with a smaller, more boutique product, we could do business there. But those markets too are starting to evolve.

As tourism becomes bigger, we might look at other [cities]. Resort and golf opportunities could also come up.

Q Resorts are something where you could invest on your own in India. Is that an opportunity that you have considered?
TRUMP: We have one of the hottest luxury collections—the Trump Hotel Collection. Within the next couple of years, we will have 25 hotels. We have Trump Soho and Trump International in Central Park West. I like the concept of a great partner for our hotels business as we are so far away. But we would manage it on our own.

Q. Do you see golf becoming a part of your business in the Asian market?
TRUMP: We already have the Turnberry Resort in Scotland which is doing very well. And then there is Doral in Miami which will be the number one golf resort very soon. The Asian market is very far away but I will say the whole golf thing is coming here.

Q. How many visits would you have made to India?
TRUMP JR: I have made eight or nine visits in the last few years to understand the market.
TRUMP: I have been here before but this is my first business visit.

Q. And who has the last word on the projects?
TRUMP JR: Him obviously (referring to his father).