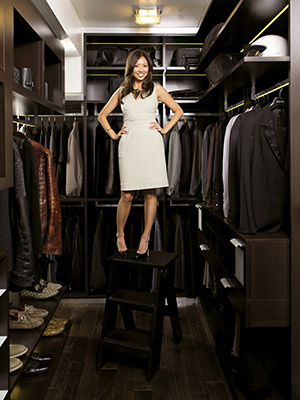 His $200,000 showcase storage area is the work of Lisa Adams, a pint-size, MBA-toting, college-trained chemist-turned-designer who founded her bespoke closet design ﬁrm, LA Closet Design, ﬁve years ago. “The trend now is shopping in your closet and having it feel like a boutique space,” explains Adams.

She would know: LA Closet Design is currently remodelling closets—at an average fee of $60,000 to $80,000—for 24 high-end homeowners. Adams’ client list reads like a red carpet event: She’s crafted closets for Eddie Murphy, Derek Fisher, Jewel and Jillian Michaels. For Billy Crystal, she constructed a special display dedicated to the collection of black tuxedos he has donned as a repeat Oscars host; for another section she designed a mock locker room to exhibit the actor’s famous collection of baseball jerseys.

And business is looking up: Revenues were plus 42 percent last year and have climbed nearly 30 percent so far in 2012. The ﬁrm’s biggest job to date: A $500,000 three-storey space inspired by the Bergdorf Goodman department store, constructed with its own interior staircase and themed ﬂoors.

If that sounds outrageous, consider that affluent homeowners already shell out large sums to get the most from these relatively small spaces. Once an architectural afterthought, closets have become a focal point in the home remodelling rebound. According to an American Institute of Architects survey earlier this year, master bedroom walk-in closets were the number one projects on US designers’ to-do lists for 2012.

LA Closet is one of the few ﬁrms in the world to specialise in luxury closet design, with Adams overseeing every project herself. She will assess every nook and cranny and inventory every garment and accessory. Once the layout is approved from 3D design renderings, she begins her hunt for unusual furniture and rare materials. The fabrication and installation will typically take two months, and Adams will return to hang clothing on felt (never wire) hangers, place inserts in boots (so they don’t slouch on display) and colour-co-ordinate scarves on special racks.

Nearly half of LA Closet Design’s clientele are men. “For my male clients there’s this notion of a man cave where they can go and be alone,” notes the designer. 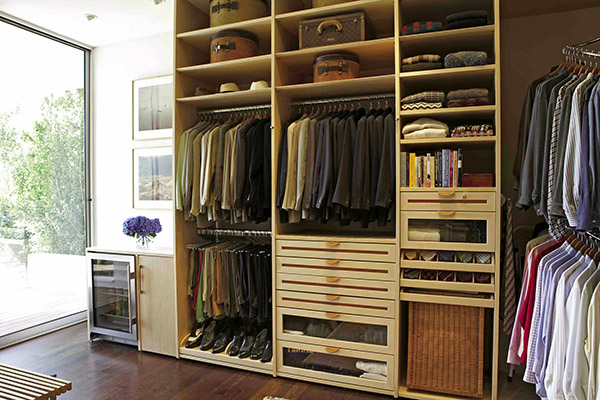 “It’s not just about space but also not wanting to listen to her hair dryer—and her not wanting to listen to me sing,” admits Robert Cort, a ﬁlm producer with credits like Cocktail and Runaway Bride. He and his wife, Rosalie Swedlin, employed Adams to carve his and hers territories from a 600-square-foot space in the mid-century modern home they formerly owned in Beverly Hills. Cort even had Adams install a putting green.

“I like a real feeling of a room with space and comfort that’s aesthetically pleasing rather than simply functional,” says Cort, who sold his unlisted Trousdale Estates home earlier this year. He and his wife are currently plotting the closets for their new $10.5 million home.

TV personality Giuliana Rancic hired Adams after seeing the wall of purses she’d designed for Kardashian matriarch Kris Jenner. “Lisa capitalised on the space so well, I’m afraid I won’t be able to ﬁll it!” jokes Rancic. Like many of LA Closet Design’s customers, the Rancics believe a well-utilised closet will punch up their home’s resale value.

Many of Adams’ clients agree: Some enlist her with the express purpose of ﬁnding a buyer. Developers are beginning to hire Adams for their new projects as well. “It’s a very useful tool for us because the closets are beautiful and it shows just how spacious they are,” explains Kimberly Lucero, AEG’s vice president of sales and marketing at the Ritz-Carlton Residences at LA Live. “It’s the same principle as having furnished models.”

Exactly how much a closet adds is hard to pinpoint. “It’s difficult to quantify the hard value a closet like Lisa’s adds because you are talking about homes already worth millions of dollars,” says Mauricio Umansky, chief executive of The Agency. “I can tell you that it deﬁnitely adds to the saleability. I can’t tell you how many times I lose deals because of poor closets.”

For many clients, though, the value is simply personal satisfaction. “It’s probably the best feature in our home,” says Candice Kochenour, an advertising ﬁrm executive whose Philadelphia condo touts a distressed blue-grey closet sporting globe chandeliers, a built-in television console and a wine fridge. “My husband couldn’t understand why we were doing this. Now that it’s done, when we have people over he walks them through the closet,” chuckles Kochenour.