All that fun in the vibrant Southeast Asian country can be exhausting. So we found you the perfect place to wind down 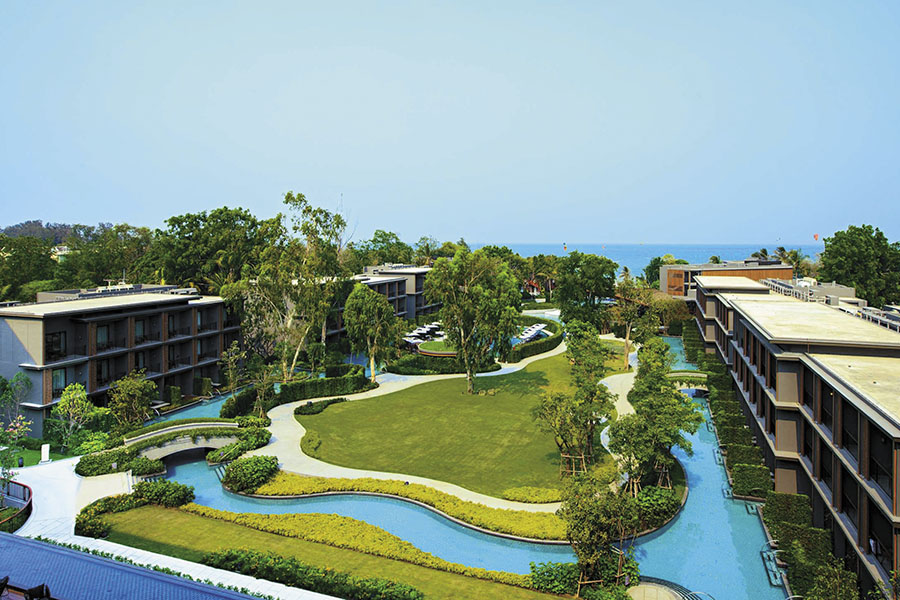 We could have been sauntering along the beach or we could have been happily lazing around on a deck chair sipping a coconut drink. Instead, we are walking around the Bluport Mall in Hua Hin in Thailand looking for a beach accessories shop because we have decided that this holiday cannot be complete without a float. Not just any float, but one shaped like a pizza slice (bright yellow with toppings of olives, tomatoes, mushrooms and peppers) or a pineapple.

About 200 km from Bangkok, Hua Hin is a beach resort town that has been a perfect escape from the bustle of city life way before Pattaya and Phuket became tourist destinations. Since the 1920s, to be precise, when the train network provided access to the town and the royals built a summer retreat here. While a drive takes about three hours, the train, making its way at a stately pace, takes about four to five hours from Bangkok. And the Hua Hin station, reportedly the most beautiful station in Thailand, is worth a dekko. Built of wood, it is a quiet and charming place, not to mention the train carriage stationed across the road that has been turned into a library.

Our own retreat here is the Hua Hin Marriott Resort & Spa, a 322-rooms-and-suites resort that opened in 2016. It is essentially rooms surrounding several swimming pools. Kids are at the centre of a lot of activity here, as is evident from the 700-metre lagoon-shaped loop pool meandering its way through the entire property, a teenage pool, a fun water park in a separate section, and a kids club that has different activities on each day of the week. Though there is also an ‘Adults Only’ pool, it is the idea of floating along in the lagoon pool that appeals the most, so you understand why the place has brought out a desire in us to own a brightly coloured, happy, cheery float.

It has been a hectic day that started with yoga in the garden early morning and as far as holidays go, that’s about enough activity as far as we are concerned. So, armed with the floats (including one small bright pink flamingo float to hold a drink) we head back to the hotel, leaving the remaining shopping for the local night market that we plan to visit later.

No Thai town can be considered complete without a night market and Hua Hin is no exception. The one we head to, making our way through streets and bylanes lined with prettily lit restaurants and cafes, was popular with fishermen coming home late at night, providing them with a place to eat, but now has everything from clothes and shoes to massage services and bags. Besides fresh seafood, of course.

The other night market, Cicada, is a newer, more artisanal one with live music, an amphitheatre and hand-crafted goods. Tie-and-dye fabrics, hand-painted wooden magnets, jewellery, and clothes, they’re all tempting, as are as the rows of food stalls in the centre. But we have an early start the next day (yoga, remember?) so we wrap up quickly and in any case, the market, open only on weekends, shuts at 11 pm. While most of Thailand is known for its night life, Hua Hin is not a place where people party into the wee hours. Which is a good thing.

The next day, after a scrumptious breakfast at the Marriott’s Amber Kitchen, we head out to a vineyard. Yes, you read that right. A mere five minutes out of Hua Hin the landscape changes, it is green and hilly, and just 45 minutes away is Monsoon Valley Vineyards where you can try their wines along with a fresh seafood lunch spread at their restaurant looking out at rows and rows of vines on grounds that can be explored either on a bicycle or an elephant. If that doesn’t really appeal, you could just sit back lazily, as the wine and delicious food have their desired effect.

Popular with the Thai population for family weekend breaks, Hua Hin has plenty to keep you occupied, from water parks to golf courses. But a weekend is what we have planned for and as we get ready to leave we make a last stop at the Market Village mall right across the road. This is more street-sy and quaint, unlike the Bluport Mall, which is bigger and has gourmet stores and luxury brands. Because sometimes you need a Blueport and sometimes a Market Village. Just as sometimes you need the frenzy of a Pattaya and sometimes a more relaxed Hua Hin.

Combine business and pleasure in Bangkok 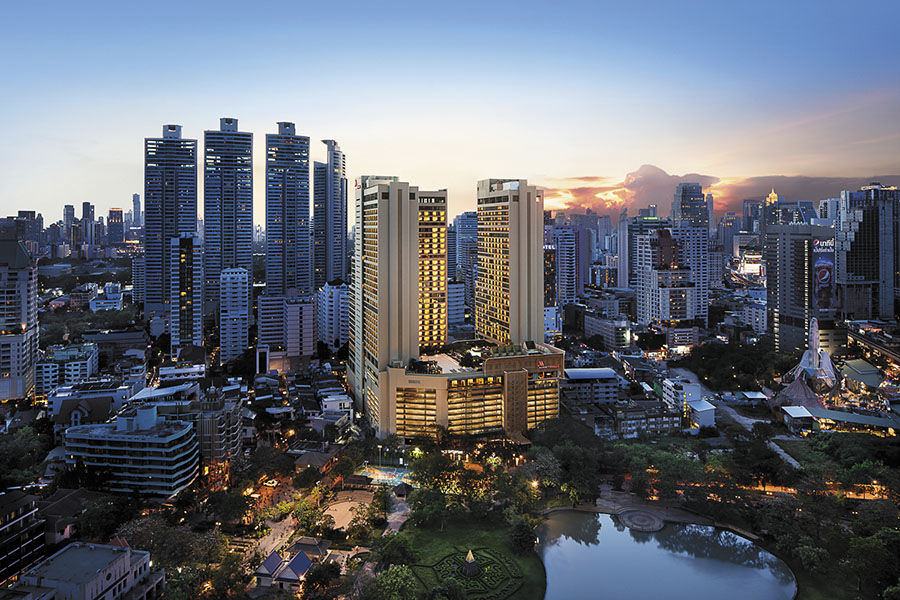 The Bangkok Marriott Marquis Queen’s Park is perfect for business and leisure
Along the Sukhumvit Road in downtown Bangkok, and right next to the EmQuartier Mall, is the newest Marriott in Bangkok, and it is a Marquis. That means a hotel with more than 1,000 rooms, numerous meeting and events places, grand public spaces and at least four authentic dining experiences. Which makes the Bangkok Marriott Marquis Queen’s Park perfect for a holiday or a business off-site, or even a combination of both.

What makes it even more interesting are the little touches that Marriott brings to meetings and events. Food for snack breaks during meetings goes beyond coffee and croissants, with small bites that make for great conversation starters—we loved the cocktail molecular version of a Tom Yum soup with its drama and surprise—while TED salon events, which play on screens across the hotel thanks to their tie-up with TED, keep the creative juices flowing.

There are a couple of outdoor pools, restaurants ranging from Japanese to Chinese to Thai (we recommend chef Oscar Pun’s suckling pig paired with the chrysanthemum gimlet and chef Mizuho Nagao’s delicately flavoured seiro soba with white leeks and wasabi paired with a saketini) and a 24-hour fitness centre, all of which make it a destination in itself. The hotel opened in December last year with a soft launch and is set to have a grand opening by end of this year. 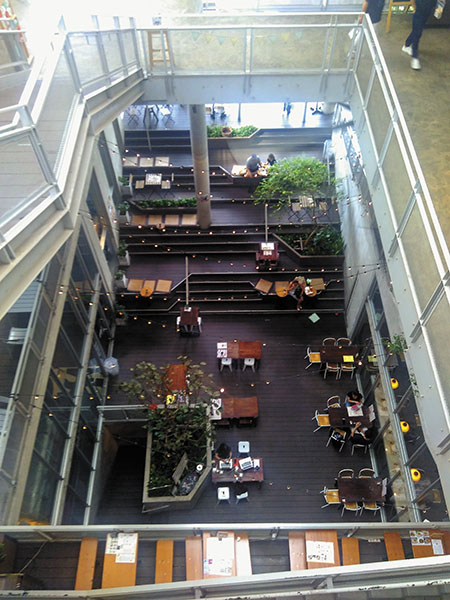 The Commons mall promotes local skills
Image: Monica Bathija
Malls and markets are aplenty in Bangkok. The Commons, which opened last year in the locality of Thonglor, a short ride from the Marriott, brings both together in the most delightful way possible. Run by the owners of popular hangouts Roast, a restaurant, and Roots (both situated on the third floor of the Commons), the ‘mall’ brings the local community together while promoting local skills. The shops are one-offs, so expect great breads, pizzas and artisanal food.

The architecture too sets it apart—it is open to air as against air-conditioned, with large fans keeping the circulation going in the public areas. The ground floor has cafes and eateries that offer items in a grab-n-go style for customers to take home or enjoy in the Common Ground, a beautifully landscaped area. The first floor is The Village, with little shops scattered amidst gardens; the second is The Play Yard, a whole floor where both adults and children can play; the top floor has Roast (with farm fresh ingredients and a herb garden, and where the vanilla mille-feuille is to die for), while Roots promotes Thai coffee. A great place to chill or catch up on work.


(The writer travelled to Thailand at the invitation of Marriott Hotels)