The journey of a serial entrepreneur

Daniel Debow, a serial entrepreneur in-the-making describes his passion for pushing the envelope and the opportunities that excite him most. 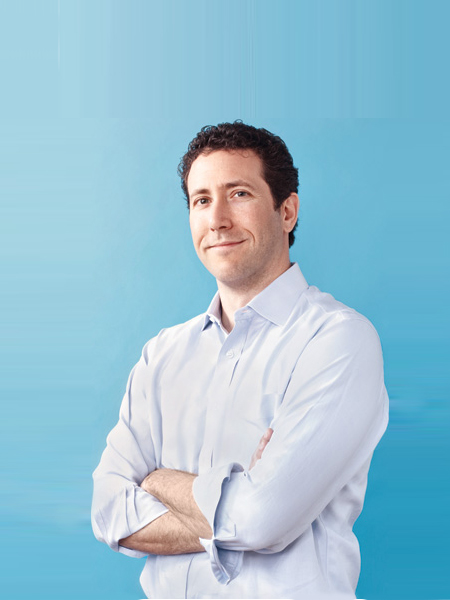 Q. When did you first realize you had it in you to be an entrepreneur?
I don’t know that I ever had that inkling. I just sort of looked around and saw people succeeding at it, and figured I might have a chance. I never had a lemonade stand when I was a kid, but when I was in high school and university, I was always organizing things; rock concerts, fraternity parties, radio shows. I loved the idea of creating something out of nothing, and having people enjoy it.

I only realized that I preferred a more entrepreneurial work environment during my summer job at Goldman Sachs, when I was a graduate student. It became clear pretty quickly that the classic corporate environment probably wasn’t for me.  Soon after that, I connected with David Ossip, and he gave me an opportunity to work with him on starting up his company, Workbrain. I actually co-wrote the original business plan with Matt Chapman (Rotman '00) while I was still in business school. It was extremely fulfilling to be part of creating a brand new company; I was hooked.

Q. Workbrain grew much more quickly than expected. What were the key challenges your team faced?
For the record, I was a founding member and executive at Workbrain, but it was David’s company. To your question, the biggest challenge we faced due to rapid growth was related to people. Finding good talent who could deal with the ambiguity and hectic pace of scaling up at an amazing rate. There is plenty of raw talent in Toronto, but at the time, it was not easy to find experienced talent—people who had scaled a start-up. I actually spent a ton of my time on this as we grew the business.

Then, of course, there were all the random, crazy things that happen when you’re starting a company. We thought our first segment would be airlines, and we were all set to announce that on the morning of September 11, 2001. Clearly, that was not the day to announce a new airline-focused business. Then a couple of years later, SARS affected our business. These sort of seemingly random, macro events—which really didn’t have anything to do with me—ended up influencing me a lot. I learned to be really resilient and to just roll with things.

Q. Describe your efforts to adapt the Lean startup approach beyond the manufacturing floor, to the realm of human capital, with Rypple.
I had learned about lean during my [Rotman] MBA program, and when I went to work with David, I read a lot about ‘agile software development’, which was really the same principle as lean, with roots in how you treat people. When Taiichi Ohno wrote about the Toyota production process, he was really talking about a philosophy of people management: it was about giving people information, autonomy and a compass. He found that letting people solve problems—by giving them data and feedback in real time about production problems, along with the autonomy to learn and decide—enables  continuous improvement.

When David Stein, George Babu and I were working on the idea for Rypple, we knew that the performance-management process was fundamentally broken, and that it was very ‘un-lean’. A manager might have some important feedback to give a particular worker, but she had to wait until the end of the year to do anything about it.  That doesn’t help anybody; it’s sort of analogous to ‘inventory getting stale’—which is the opposite of Kaizen and continuous improvement. We thought, wouldn’t it be great to live in a world of continuous feedback?

I became friendly with Eric Reis, the founder of ‘lean startup thinking’, and he became an advisor to Rypple. We asked ourselves, how could we apply these philosophies to managing people? Then it came to us: by giving them feedback quickly, and giving them the power to solve problems on the line.  With the lean approach, you fundamentally trust your employees to do the right thing—because you believe that they are good people who want to do what’s right for the company.

Traditional performance management systems have been very compliance-driven and ‘legalistic’. The thinking is, ‘Document everything, or we won’t be able to fire this person later on’. What if, instead, the focus was clearly placed on improving human behaviour? That’s how Rypple came about.

Q. Salesforce bought Rypple in 2012. How did it first come into your world?
One of their board members was an early investor, and then one of their writers started helping us with our communications.  Soon after, we tried to make them a customer. And then, totally independently, one of their business development people reached out to us about investing.  As we went through the process of having them become a strategic investor, ultimately, they got to know our team. They talked to our customers—including Facebook and Linkedin—and heard good things, and then CEO Marc Benioff decided that he just wanted to acquire the business.  As the saying goes, he made us an offer we couldn’t refuse.

Q. After Rypple was acquired by Salesforce, you went to work for them. Describe your work there.
For the first few years, I was focused on integrating the company with Rypple—transforming it into Work.com and repositioning it as a sales-performance tool.  Then, I took on a new challenge. Marc Benioff has incredible foresight, and he knew before most people that wearables were coming, and that they would have a huge impact. So he got me to build Salesforce Wear, which allowed developers to use the Salesforce platform to build wearable apps and come up with all sorts of stuff. We had dozens and dozens of companies—probably hundreds now—building wearable apps.

Q. You have made an analogy between ‘courting’ investors and dating. Please explain.
I think there is a basic misunderstanding that as an entrepreneur, you just show up at a pitch meeting, describe your plan —and someone will write you a cheque. To me, that’s sort of like going on a first date and proposing marriage at the end of the night. In reality, both things—dating and finding investors—are about building trust and affinity over time. The fact is, investors are always trying to figure out, “Can we trust this entrepreneur?”  If you don’t have a track record to point to, that will not happen instantly.

Q. What is the biggest risk you’ve ever taken, and how did you approach it?
It’s funny: there’s this great narrative of entrepreneurs as super risk-takers; but I don’t think that’s necessarily true.  Of course, there are the Elon Musk's of the world, but most entrepreneurs actually become excellent risk ‘understanders’, identifiers and hedgers. When I took the offer to join Workbrain, I had in my hand an offer from BCG so that, if it didn’t work out, I could go back to BCG. So there was little risk involved in that decision. It’s true that I started Rypple with David Stein after Workbrain, and there was definitely some risk there.  But because we had already had some success at Workbrain, we knew we’d be getting offers at that point, so it wasn’t like we were betting our family’s future.

Actually, the biggest risk I ever took was after completing my undergraduate degree.  I accepted a job with my college fraternity, travelling around the United States for a year and opening up fraternity chapters and being a leadership consultant for them. I had no idea what that job was. I had very little supervision—I was basically given a credit card and a rough sense of ‘here are the universities you should go to.  Just check in every few days’. This was before mobile phones and laptops, so I would often call in from a pay phone. That was an interesting risk because I didn’t know what my future was going to be.  But it turned out to be an amazing learning experience.

People become so fixated on their career path that they don’t understand that in reality, it’s more like a ‘career stumble’.  When you see an interesting opportunity, you have to be prepared to seize it. I never had a masterplan.

Q. You were named Canada’s Angel Investor of the Year in 2015. Of all the companies you’ve invested in, which two are you most excited about?
That’s like asking a parent which of their children is the favourite—but here’s what I would say. Despite the stereotypes, there are some Canadian companies whose ambition is humungous. The problems they’re trying to tackle are genuinely large and complex, and they’re using the latest technologies to tackle them. These are the companies that are really exciting and interesting to me. I love to see people pushing the envelope. These tend to be companies that involve next generation user-interface—like Thalmic Labs, where I’m on the board—and companies that are using machine learning, robotics and artificial intelligence.  Usually, there is a one-in-100 chance they will succeed, but if they’re right, these will be multi-billion dollar, world-changing companies.

Q. What can you tell us—if anything—about ‘NewCo’?
Not much at the moment. All of these things start off as ‘learning journeys’, so I’m in the process of learning right now. I will say there are some really amazing shifts in machine learning and the way people communicate at work, and this is creating opportunities to reinvent categories and rethink things that previously looked pretty mundane.  As I indicated earlier, when we started out, people thought a performance review was a performance review—that you could never change the way it is done. Then came Rypple. There are literally tons of opportunities out there to look at the way the world is and ask, What could be?  What could we trade? I can tell you that we are studying some of the most basic problems people face all the time—but that’s about all I can say for now!

Daniel Debow (Rotman JD/MBA ‘00) is the former senior vice president of salesforce.com’s emerging technologies. He was the co-founder and CEO of Rypple, which was acquired by salesforce.com in 2011 and rebranded as Salesforce Work.com. Daniel was on the founding team of Workbrain, a workforce management software company, and led Workbrain’s sale to Infor in 2007. He holds a JD/MBA from the University of Toronto and an LLM in Law, Science and Technology from Stanford University. He lives in Toronto with his wife and three kids.