Kiran Mazumdar-Shaw says niche companies are better valued abroad, especially in markets like the US 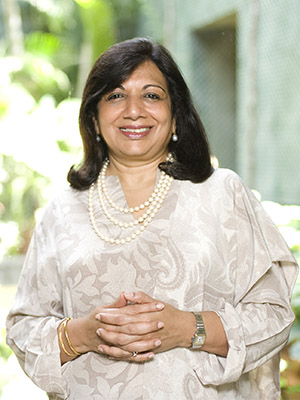 Biocon, the Bengaluru-based biotechnology firm, will look at an overseas listing for itself as well as its research services subsidiary, Syngene International, in the near future, according to Biocon’s chairperson and managing director Kiran Mazumdar-Shaw.
In an interview to Forbes India in Mumbai on Tuesday, she said niche companies like Biocon and Syngene were generally better valued abroad than in India and this would persuade these firms to look at an overseas listing, perhaps in the US. “The valuation for companies like Biocon and Syngene will be completely different in markets like the US. It won’t happen immediately, but perhaps a year down the line, we will look at a listing for both the companies,” she told Forbes India.
Mazumdar-Shaw was in Mumbai as Syngene debuted on the bourses on Tuesday after raising Rs 550 crore through a successful initial public offering for its shares in July. As the markets opened, Syngene’s shares were trading at Rs 295 per share on the BSE. They closed at Rs 310.40 per share, up 5.22 percent over the opening price. The company’s stock price touched an intra-day high of Rs 318.20 per share. Syngene’s IPO, which hit the capital markets last month, was oversubscribed 32 times.
According to the latest investor presentation on Biocon’s website, Syngene had revenues of Rs 822.50 crore in FY15, which was around 26 percent of Biocon’s consolidated revenues for the fiscal. Biocon offloaded around 11 percent through the IPO and holds around 74 percent in Syngene at present.
According to a research report dated August 11 by Motilal Oswal, Syngene had a net profit of Rs 175 crore in FY15 and this is estimated to increase to Rs 281 crore in FY17, on an estimated turnover of Rs 1,346 crore.
Syngene is one of India’s largest contract research organisations, working with international pharma clients such as Bristol-Myers Squibb, Abbott and Baxter. It helps clients across service platforms, including the discovery, development and manufacturing of small and large molecules.
“Syngene has supported companies up to the clinical development stage as of now. But going forward, we also want to extend this to commercial supplies to these clients,” Mazumdar-Shaw said. Sustained momentum in research for new molecules, and ramp up of contract manufacturing plans prompts her to expect that Syngene can yield a turnover of $250 million. This is a part of the promoters’ vision for Biocon achieving a turnover $1 billion by 2018.
A potential overseas listing may be preceded with a likely demerger of Syngene from Biocon, the Biocon MD said, as this would help in creating shareholder value. This will happen once Biocon’s dependence on Syngene to bolster its earnings reduces as more of the former’s portfolio of biosimilars is commercialised.
“If we demerge Syngene from Biocon, all shareholders of Biocon will get shares in Syngene. Eventually when we want to hive off Syngene into a separate entity, we may monetise (a part of our stake) a little more as a first step towards the demerger,” Mazumdar-Shaw said.
Meanwhile, the Rs 550 crore raised by Biocon through the stake sale in Syngene will be used by the parent company to further the development of its biosimilar products through investments towards research and development (R&D) and capital expenditure, she said. “We need around $150 million for one-time capex, and around $70-80 million to invest in R&D each year.”