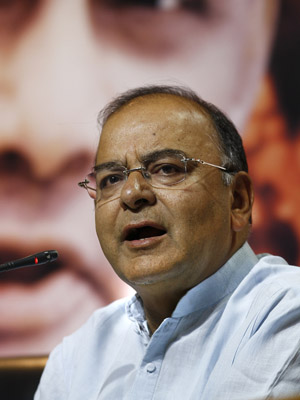 Indian investors seem to be buoyed by the latest statements of Finance Minister Arun Jaitley over structural reforms and the plan ahead which would help revive economic growth. The benchmark 30-share Sensex index hit a record high of 28,282.85 points in morning trade on Tuesday, a day after Jaitley stressed that the government would take several small steps in reforms, rather than announcing ‘big bang reforms’. The finance minister was speaking at a Citi investor summit.

The government, which took charge in May, announced a slew of reforms, including foreign direct investment in defence, diesel deregulation, revised pricing for domestically produced natural gas, changes in labour laws and to allow opening up of commercial mining in coal by private firms.

Citi analysts Aditya Narain and Jitender Tokas, said: “We were impressed. We believe the market should be too.”

The analysts said there was enough in the pipeline, which should come out in the open soon. This includes a revised Goods & Services Tax act, land acquisition law modifications and ongoing labour law changes.

The government has announced FDI in insurance, but it awaits clearance from an expert panel, which is to be reconstituted. The government is also working to create a single window clearance system to boost steel, coal and power projects.

In an unrelated move, Prime Ministers Narendra Modi and his Australian counterpart Tony Abbott signed a new framework of security cooperation between the two countries, with talks to boost maritime security and counter terrorism.

Citi, in its report released on Monday, however, said there are several reforms it hoped for, like reducing the cost of capital and boosting domestic bank financing, which the central bank would need to look at. “A lot needs to be done; it’s not all in their hands.”

“The finance minister spent about twice the time he had committed to: Addressing a range of questions clearly, suggesting an increasingly cohesive and action-oriented economic direction. We were decidedly impressed and so were most investors, we believe,” the Citi report said.

Tweets by @forbesindia
Don't Judge The Market. Make The Most Of It
How non-profits ask: Framing donation requests