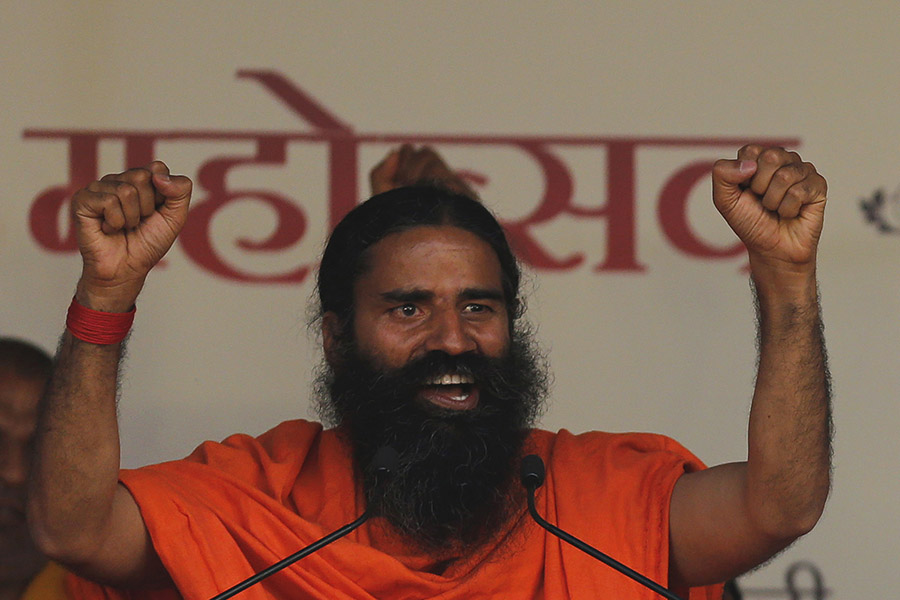 Love him or hate him, but you can’t ignore him. When Baba Ramdev addressed a packed audience in Delhi’s Constitution Club on Thursday, people waited with baited breath to hear what he had to say.

It was a rather unusual press conference; there were a plethora of Patanjali products on display in a hall that was almost overflowing with people, some from the media, many from his ayurveda company and others who had just stopped by to see what was going on at the campus at Rafi Marg as his picture was on display at the entrance.

Going forward, in the current fiscal, Patanjali is looking to double its sales at over Rs 20,000 crore. “The pace at which we are going, we will soon be India’s biggest swadeshi brand and dislodge many foreign players,” he said, sitting on the dais right next to Acharya Balakrishna, CEO of the ayurveda company and his right-hand man. “It looks like some are sleeping peacefully now. But that is not true.”

The sales target is possible, says Ramdev, as the company plans to increase its production units at several places. Currently operating primarily from Hardwar, Patanjali is looking to set up facilities at destinations such as Noida, Nagpur and Indore, among others, that would take his production capacity to Rs 60,000 crore in the next one year from Rs 35,000 crore currently.

“In India, FMCG has meant MNCs so far. We at Patanjali have broken that monopoly,” he said, adding, “We are not a corporate house. Our products have no chemicals and are priced at ranges that are affordable to people.”

Talking about its distribution network, the yoga practitioner said, “We will create more entrepreneurs. We have a distributor’s network of 6,000 now. We want to ramp it up to 12,000.”

When asked about his plans to set up a Pantanjali restaurant, Ramdev said even as there is no immediate road map, it a proposition he will consider going forward. “So far, we have taken on FMCG companies. We plan to give tough competition to global fast food chains too.”