Among the bottles to be sold in two separate auctions in February and April are some from Scottish distilleries that are no longer operating, including the Stromness Distillery, which closed in the 1920s, and Dallas Dhu, which closed in 1983 and now houses a museum 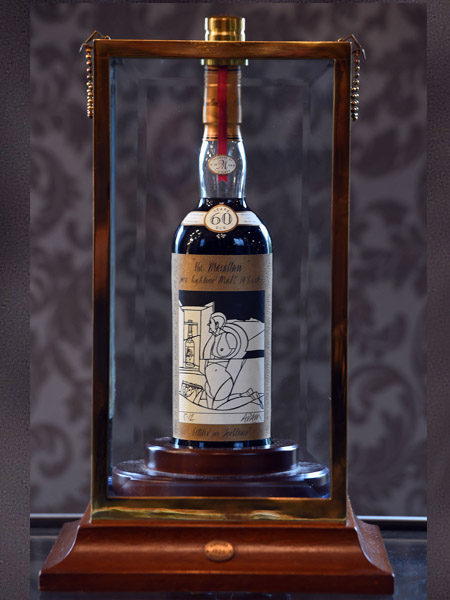 For more than two decades, Richard Gooding traveled the world in search of his favorite whiskeys. Next year, the more than 3,900 bottles he collected will be sold in two auctions, including rare offerings from storied distilleries such as Macallan, Bowmore and Stromness.
Whisky Auctioneer, an online auctioneer based in Scotland, announced the sale Monday and expects the collection to fetch more than $10 million. Gooding, a Colorado businessman, was a frequent traveler to Ireland and Scotland, where he attended auctions and purchased whiskeys directly from distilleries, according to a video about the collection. As well as buying rare vintages, he bought one-of-a-kind whiskeys for tasting with friends. Gooding, who died in 2014, was the scion of a distribution and bottling empire; his grandfather started the Pepsi Cola Bottling Co. of Denver in 1936. The younger Gooding inherited the company from his father and took over as owner and chief executive from 1979 to 1988, according to his obituary. In 1988, he sold the company to PepsiCo and spent his remaining decades as a philanthropist and whiskey collector. His collection includes rare offerings, such as a 60-year-old Macallan Valerio Adami 1926. Only 12 bottles of the single malt Scotch were bottled with a label created by the pop artist Valerio Adami. Last year, a bottle from the Scottish distillery sold for $1.1 million at auction. Gooding’s collection also includes a bottle of Macallan 1926 Fine & Rare. One was sold in October for $1.9 million at a Sotheby’s auction in London, a record price, Spirits Business website reported. “Macallan, as a distillery, is the most collectible,” said Jeffery Lindenmuth, the editor of Whisky Advocate, a consumer magazine that focuses on industry news and tastings. “They consistently break records at auction.” Gooding had eclectic taste, and was interested in aviation, boat design, architecture, food, travel and fashion, the obituary said. He was enamored of custom suits, which he wore with ties from Leonard, a Parisian clothing designer known for its brightly colored prints. But mostly, he loved whiskey. Until recently, the collection was housed in Gooding’s “pub,” a room in his home designed to showcase each bottle. “His mission was to collect a bottle that represented every single distillery,” his wife, Nancy Gooding, said in a statement. “He loved every aspect of it, from researching the many single malt distilleries to visiting them and tasting their whiskies.” Among the bottles to be sold in two separate auctions in February and April are some from Scottish distilleries that are no longer operating, including the Stromness Distillery, which closed in the 1920s, and Dallas Dhu, which closed in 1983 and now houses a museum. Gooding also collected whiskeys from the United States, Ireland and Japan. Collectors have been driving up prices in recent years, particularly for whiskeys made in Scotland and Japan. Lindenmuth said rare U.S. whiskeys at auction often sell only for thousands of dollars, while those from Scotland and Japan can fetch $1 million or more. “Nothing seems to rival them,” he said. Lindenmuth said the most high-priced bottles at the auctions are unlikely to be bought for drinking. “These will end up in the hands of another collector,” he said. “People buy them for speculation, bragging rights or they are trying to complete a collection.” Of note is that the collection is being sold by an online upstart instead of Sotheby’s, a dominant player in the whiskey auction business. In whiskey auctions, buyers pay a premium based on the selling price of the item. At Sotheby’s, for example, buyers pay a premium of 21%, Lindenmuth said. The premium at Whisky Auctioneer, by contrast, is 10%. “It’s a shrewd move on the part of the seller,” he said.

Tweets by @forbesindia
The Apple effect: iPhones, iPads still on top of India's mind
What did the US get for $2 trillion in Afghanistan?