Where are the tech Zillionaires? San Francisco faces IPO fizzle

After the IPO duds from Uber, WeWork, Lyft and others, San Francisco has been left as a slightly more normal town of tech workers who got rich-ish, maybe making a few hundred thousand dollars. But that doesn't go far in a city where the median cost of a single family home is about $1.6 million

By Nellie Bowles and Kate Conger 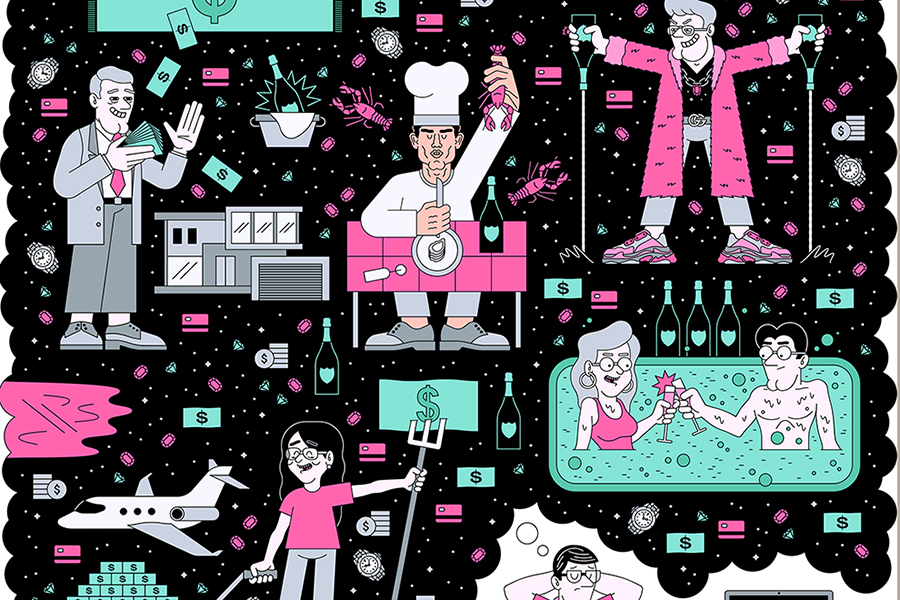 The wave of tech initial public offerings, the one that was supposed to mint San Francisco’s new ultra rich, has fizzled. (Filippo Fontana/The New York Times)

SAN FRANCISCO — Seven months ago, the Four Seasons in San Francisco sent out a news release announcing the glad tidings that would come soon: New residences for the new money.

Builders were hoisting glass and steel into a 43-story tower where residents would have their own on-staff wine concierge, plus Blue de Savoie French marble, German milled Poggenpohl cabinetry and Dornbracht fixtures. The building’s $49 million penthouse would be the most expensive in San Francisco.

“Just in time for the coming wave of IPO millionaires in San Francisco,” the Four Seasons said, promising “an elevated sales experience” to cater to “this new class of buyers.”

But then the wave of tech initial public offerings — the one that was supposed to mint San Francisco’s new ultra rich — fizzled. The stock of Uber, the ride-hailing giant, has dropped nearly 30% since the company went public in May. Lyft shares are down nearly 40%. Pinterest and Slack have declined, too.

San Francisco has been left as a slightly more normal town of tech workers who got rich-ish, maybe making a few hundred thousand dollars. But that doesn’t go far in a city where the median cost of a single family home is about $1.6 million.

“Everyone that came back post-IPO seemed to be the same person. I didn’t see any Louis Vuitton MacBook case covers or Champagne in their Yeti thermos,” said J.T. Forbus, a tax manager at Bogdan & Frasco in San Francisco.

Private wealth managers are now meeting with a chastened clientele. Developers are having to cut home prices — unheard-of a year ago. Party planners are signing nondisclosure agreements to stage secret parties where hosts can privately enjoy their wealth. Union organizers are finding an opportunity.

Everyone had gotten too excited, and who could blame them? The money was once so close: A startup that coordinated dog walkers raised $300 million. The valuations of the already giant ride-hailing behemoths had nearly doubled again. WeWork, a commercial real estate management startup that owned very little of its own real estate, was valued at $47 billion.

City of Towers
Towers rose across San Francisco to house the money. The marble was polished. The bathroom floors were warm. The private pools were being filled.

“The world has changed in a year,” said Herman Chan, a real estate broker with Sotheby’s International. “We expected an upward trajectory at least, and it really kind of deflated. These companies aren’t dying but the cultural zeitgeist, that momentum of IPOs, is gone. You don’t even hear anyone talking about it anymore.”

The developers who had fought the odds of regulation and zoning to build their glass residences in the sky had timed their units to the IPOs. But on a recent visit with the Four Seasons sales team, they acknowledged that techie wealth was not what they were seeing. Interest was mostly coming from overseas buyers, young heirs to foreign fortunes and older executives looking for city pieds-à-terre, they said.

Also in time for the wave that was not a wave are more luxury towers: The Avery, The Harrison, 181 Fremont, The Mira.

“The definition of luxury is scarcity, and there’s so many now,” Chan said. “Nowadays, my buyers are getting a contingency period and inspectors. Things you would never ask for before. There’s not 10 offers on a house anymore.”

Case in point: A full-floor apartment in San Francisco’s poshest neighborhood of Pacific Heights was listed at $21.6 million and advertised that “a sommelier-worthy wine cellar awaits 1,500 of your most prized bottles.” But more than a year later and after a $5 million price cut, it is still on the market.

Prices for the top 5% of San Francisco area real estate listings — the cream of the crop — rose 7% between 2017 and 2018. This year, they have fallen more than 1%, according to data prepared for The New York Times by the real estate listing service Zillow.

The malaise has spread south into Silicon Valley. A $10.8 million home listing in the town of Portola Valley, California, was slashed to $5.7 million. The median sale price for a nearby home in San Jose has dropped 10% in a year to just under $1 million, according to data from Zillow.

Before the tech IPOs, Deniz Kahramaner, then a real estate data analyst with the property brokerage Compass, had rallied packed rooms of real estate agents and investors about the bonanza that lay ahead. He had charts and estimates of thousands of new millionaires raising the average price of single family homes in San Francisco above $5 million.

Now, he is more muted. “The IPO cash-out hasn’t played out as I mentioned in my original presentation,” he said.

“This year brought a lot of people back to reality,” said Ryan S. Cole, a private wealth adviser at Citrine Capital, a wealth management firm in San Francisco. “We’ve had a lot of people fund 529 plans for their kids. Pretty boring stuff.”

Some private wealth managers said they were actually somewhat relieved.

“At the end of the day, it’s funny money until it’s realized,” said Jonathan DeYoe, another private wealth adviser. “I’ve got Uber and Lyft clients that are disappointed. It’s a different house now. It’s a different school situation for the kids. But they’re still by and large in good places. No one’s impoverished.”

And so workers who thought they would upgrade from Allbirds to Berluti shoes are remaining, after all, in the Allbirds.

As some rank-and-file tech workers realize they might not get rich from company stock, the allure of working long hours without comparable real money pay is also wearing thin, said labor organizers. They have found traction this year in an industry long resistant to unions.

“The incentives to take the licks that you do are in the hope of some sort of big payoff down the road,” said Paul Thurston, who focuses on unionizing San Francisco tech workers and is the organizing director at the International Federation of Professional and Technical Engineers.

Now, “the engineers and the app designer and the developers are going to be treated a lot more like the employees that they are rather than like partners, which is what they’re told pre-IPO,” he said.

Jonathan Wright, organizing director of Engineers and Scientists of California, said he was in talks to unionize the workers of several big tech companies.

“There’s a promise: you work 100 hours a week, you sleep under your desk, and then you’ll be rewarded with the wealth of Bezos,” Wright said. “That mythology has been fading for years. The day of the unicorn is over.”

Where there is new wealth, it’s coming from the older tech companies like Apple and Alphabet, whose stocks this year have soared. And some fortunes are still being made from the IPOs. While Uber’s shares have fallen, the company’s co-founder, Travis Kalanick, has sold off more than $2 billion in stock, according to securities filings.

“Especially with things like Uber, almost all the IPO wealth was going to a couple of people,” said Kalena Masching, a Redfin agent in San Jose. “They are not looking to buy a standard house here.”

Another bright spot: female-led companies, with more becoming unicorns in 2019 than any other year, according to Aileen Lee, the venture capitalist who coined the phrase “unicorn” to refer to a private company valued at $1 billion or more.

And post-IPO parties are happening. They are just secret — and phone-free.

“We’re signing a lot more nondisclosures,” said Jay Siegan, who curates party entertainment for corporate tech clients. “A year ago, people would set up social media stations at the party, signs with the hashtag for Instagram. Now we have clients asking guests to check their phones at the door or using those Yondr bags.”

These are pouches used to lock phones en masse at concerts and events where someone might be tempted to record.

Self Reflection
However, in public, the tech world is all about reflection and self-critiquing after the year that was.

The IPO disappointment has gotten so extreme that two Silicon Valley techies are setting out to do what few have done before: Make fun of themselves.

David Cowan, a venture capitalist with Bessemer Venture Partners, and Michael Fertik, founder of Reputation.com, are launching an online talk show called “The Bubble Report.” It will feature interviews with other tech executives. The point, they hope, is to poke fun at Silicon Valley from within Silicon Valley.

Cowan, either in character or just being very honest, decried the falling stock prices of newly public tech companies as victims of cruel Wall Street analysts.

“It should be against the law for unscrupulous analysts to assess stocks based on cash flow and profit, to impugn a company based on eight lines of a financial report,” he joked. “Imagine how much more value we’d have in the stock market if we got rid of that arcane thinking.”

Fertik said his inspiration to mock his industry came in part from realizing how far from reality it had all gotten.

“I want people to understand that Silicon Valley is a deeply religious place that thinks of itself as agnostic,” he said. “It has some of the strengths and many of the frailties of organized religion.”

For now, most people are waking up to find they are still on Earth. This is good news for those in San Francisco who mostly viewed the tech exuberance as bad news: housing-rights activists, first-time homebuyers, and renters.

“We are excited by any resetting of Bay Area rents that bring them down from their artificially inflated high,” said Fred Sherburn-Zimmer, executive director of Housing Rights Committee, which fights against evictions. “Eventually all bubbles burst.”