Where do you draw the line between Trust and Regulation?

By David Larcker and Brian Tayan

The litany of prominent corporate failures in the last decade — Enron, WorldCom, Lehman Brothers, and so on — ushered in an increase in regulatory requirements for corporate governance. The result is that every year, companies spend tens of millions of dollars on incentive compensation, director salaries, audit fees, internal auditors, and compliance efforts to satisfy a long list of rules, regulations, and procedures imposed by legislators and the market.

It all raises a critical but too often overlooked issue: Would corporate governance improve if companies instead had fewer controls? Would shareholders be better off if organizations instead demonstrated more trust in employees and executives? Research suggests that the answer may be yes, and that companies might benefit by emphasizing trust over regulations. Indeed, high trust settings are characterized by less bureaucracy, simpler procedures, and higher productivity. 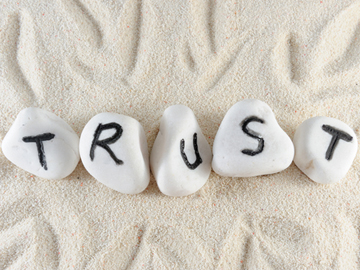 Image: {Shutterstock}
For starters, trust replaces the need for written contracts because the two parties commit in advance to abide by a set of actions and behaviors that are mutually beneficial. Both parties in a trusting relationship generally understand the limits of acceptable behavior even when these are not fully specified. And when trust is introduced into the environment, the motivations of each party are known and their behaviors are predictable. That means managers can spend less time monitoring employee actions, and employees can focus on their jobs rather than exerting additional effort simply to demonstrate they are compliant with the firm’s standards.

In the extreme case — utopia! — there would be a number of additional benefits to creating a more trust-centered environment.

First, the responsibilities of the board of directors could be significantly narrowed. Rather than balance advisory and monitoring obligations, the board would focus entirely on advising management on matters involving strategy, organizational design, and risk management. Total board-related compensation, which averages $2 million per year among midsized companies, might be reduced.

Second, the external audit could become largely unnecessary. Rather than sample a large number of accounts for material misstatement and check internal controls for deficiencies, the external auditor would serve a much narrower role of clarifying the application of accounting standards when questions arise. Audit fees, which average $3.9 million among publicly traded companies, might also be greatly reduced.

Third, the internal audit function could also become unnecessary. Companies would not require an independent assessment of their accounts, controls, and procedures because employees would be trusted not to abuse the system. Instead, the accounting department would employ a small staff to check accounts for inadvertent errors. Head count in the internal audit department, which averages seven to 15 auditors, could shrink.

Compensation contracts could also be simplified. Most companies today offer an extremely complicated program of fixed and contingent payments that vest over short- and long-term time horizons to motivate specific employee behaviors. In a trust-based environment, such an elaborate program becomes unnecessary. Furthermore, companies would no longer have to pay the risk premium associated with contingent (risk-based) pay. Instead, companies would offer large fixed salaries, potentially supplemented with cash bonuses for those who achieve critical performance metrics. Equity programs, which require a larger risk premium relative to cash programs, might be substantially reduced or even discontinued. And finally, companies could eliminate many of the bureaucratic checks and controls that are often implemented to prevent and detect legal or regulatory violations, such as bribes to win foreign business. Instead, employees would self-monitor, with line managers responsible for reporting inadvertent legal or regulatory missteps to higher-level executives.

Several examples already exist of companies that demonstrate trust in their employees and managers, and benefit from these sorts of cost reductions. Berkshire Hathaway Inc. is renowned for granting considerable autonomy to the operating managers of its various businesses. This allows the company to maintain an extremely modest head count of only 24 staff at headquarters, despite having 288,000 employees worldwide.

Real estate company Keller Williams Realty Inc. maintains a strict “open books” policy. All agents within the company’s market centers have access to detailed information about the office’s revenues, commissions, and costs. This reduces the opportunity for theft, waste, or special dealings, and also the need for a robust internal-audit department.

Netflix Inc. is known for maintaining a high-performance culture rooted in the concept of “freedom and responsibility.” Employees are expected to work hard, take ownership, and put the company’s interests ahead of their own. In return, the company offers top-of-market salaries equivalent to the combined value of the salary and bonus offered by other firms. Netflix does not offer incentive bonuses, and equity compensation is granted only to employees who voluntarily request it as a portion of their compensation mix.

An emphasis on contracts to minimize self-interested behavior creates its own set of risks. It is impossible, for instance, to write a contract that specifies all behaviors. And strict enforcement of the terms of a contract has the unintended consequence of emphasizing the minimum amount of work required for an employee to satisfy his or her obligations and avoid punishment. A contract can therefore reduce, rather than increase, productive effort.

It is true that even a company that adopts a high-trust governance system cannot entirely eliminate the risk that its trust will be abused. Indeed, the downside is potentially amplified because the company will not have effective controls in place to deal with any breakdowns that take place. Such a situation might have occurred at Johnson & Johnson, which historically has maintained a highly decentralized management system. In 2009, this structure was challenged when the company issued the first of what eventually became three dozen product recalls due to faulty manufacturing in its consumer health care division. A Fortune magazine article blames the recalls in part on the McNeil division’s “wrenching cultural change, and a quality-assurance department that crumbled as its mistakes were overlooked.”

The key, then, is knowing where to draw the line between too much trust and too little formal corporate governance. Many of the regulations of the last decade were designed for the worst offenders, not for the everyday company. A question for regulators, policymakers, and business leaders is whether “average” companies should be presumed to be more “trustworthy” — and whether it is cost-effective to impose these same standards across the board. Could it be that more trust is the answer?


David Larcker is the James Irvin Miller Professor of Accounting at Stanford Graduate School of Business and the Morgan Stanley Director of Stanford GSB’s Center for Leadership Development and Research. Brian Tayan is a researcher at the Center for Leadership Development and Research. They are the authors of the recent book A Real Look at Real World Corporate Governance.