Bidding for the bankrupt Indian shadow lender was both a strategic and a platform-driven decision for the billionaire, who trumped competitor Oaktree Capital due to brand familiarity, and better relations with bankers and stakeholders 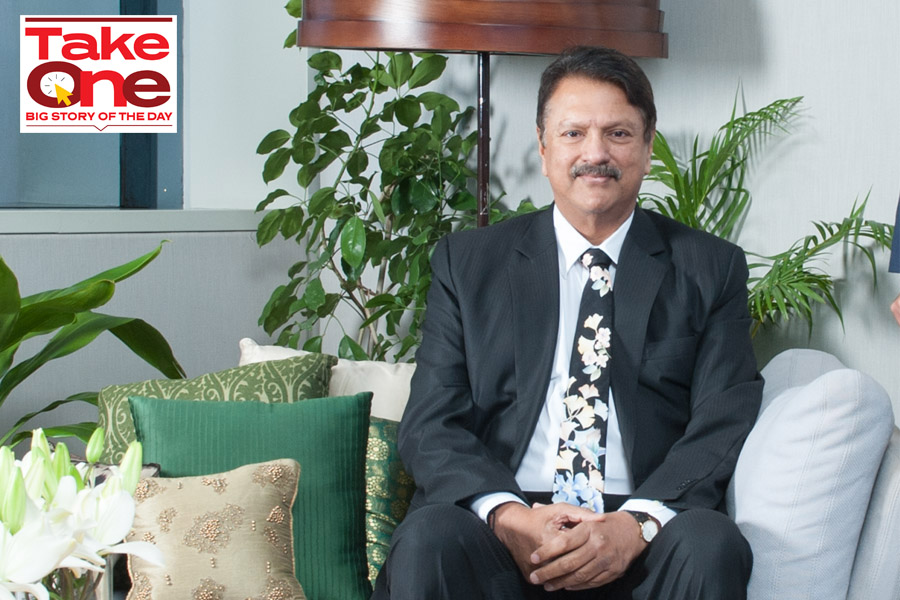 After a long-winding bidding battle and legal letters slapped by contenders, billionaire Ajay Piramal’s non-banking financial services arm, Piramal Capital and Housing Finance Ltd, emerged as the winner to acquire the assets of Dewan Housing Finance Corporation Ltd (DHFL).  On January 15, a little past 8 pm, the outcome of the e-voting started trickling in and results of the resolution were finalised. Piramal Capital received 93.5 percent votes and 6.5 percent voters abstained from voting, said a person directly familiar with the matter. Interestingly, Oaktree Capital, the global stressed asset fund that has been eyeing the asset since DHFL started faltering back in 2019, managed to get 45 percent votes, which means those who voted for Piramal, nearly half of them also voted for Oaktree. In November 2019, the Reserve Bank referred DHFL, the third-largest pure-play mortgage lender, to the National Company Law Tribunal (NCLT) for insolvency proceedings. After a voting process which ran for over 18 months, a range of voters---which included a consortium of banks, bond holders and mutual funds---completed the process. Fixed deposit holders abstained from voting. DHFL shares closed up 4.96 percent at Rs27.5 at the Bombay Stock Exchange on Monday. ​​ What tilted voters towards Piramal?  According to a person familiar with the matter, who voted as part of the process, said that one of the key reasons for voting for Piramal’s is that they are a local entity with a presence in building real estate and it also has an existing NBFC, which will make the regulatory approvals easier. After all, the transaction needs blessings of all parties, especially the central bank. It will also be easier for Piramal to transfer the DHFL stake onto its books. Of the retail book of Rs27,000 crore of DHFL, it has a clean book of Rs17,000 crore and a moratorium or non-performing loan (NPL) book of Rs10,000 crore (which is also backed by assets). Add to this another Rs. 25,000 crore which is off-book and 250-odd branches made DHFL an attractive proposition. So for Piramal it was both a strategic and platform-driven decision – this will make its book more balanced. A second person directly familiar with the voting said, “Oaktree has an alternate investment fund, and the apprehension over its structure and how it will operate the business and whether it will manage to get all approvals in place, was a big question.” A component of DHFL’s resolution also entails the insurance division. Oaktree being a Foreign Portfolio Investor (FPI), how the company would resolve that asset realistically, also came into play. While almost all the people Forbes India spoke with cited brand familiarity as one of the most important reasons for their votes, apart from wanting to close the deal without any more hurdles. Forbes India has seen a note of advisors to the resolution process, where they have given scores for the resolution plan on qualitative category of evolution, including track record or experience of the resolution applicant and key management personnel. Both Oaktree and Piramal managed same scores of 15 on 15. In quantitative aspect, however, advisors have rated Piramal’s plan at 78.99 against Oaktree’s 70.07 on an overall benchmark of 85 points (rest 15 was qualitative mentioned above). Another reason that state lenders favoured the resolution was due to Piramal’s offer to pay more cash up front. Piramal offered Rs12,700 crore as cash, against Rs11,646 crore by Oaktree, said the first person mentioned above. Third factor that tilted the bid in Piramal’s favour was voters expecting that the new non-convertible debentures (NCDs) issued by Piramal post-merger will trade better, said the second person mentioned above. What does this reflect on foreign investors? This was the first case of a financial institution being referred to the official bankruptcy process and it was a highly followed one because it has many lessons for global private equity and distressed funds who are looking to do business in India. “If you look at Oaktree, because they kept raising their offer, we saw three round of bids. They were serious about their deal.  We feel not many at Committee of Creditors (CoC) know and understand the fund completely which was one of the reasons why they could not garner enough votes,” said a third person directly familiar with the matter. While Oaktree fought a long battle, people who voted on the resolution cited that one of the main reasons for Oaktree missing out on the deal was not just the difference in cash component, but the doubt whether Oaktree would have managed to get all the approvals in place. Something that is unknown, but this is more a lesson for foreign funds to engage more with bankers and stakeholders to familiarise them with their business approach. 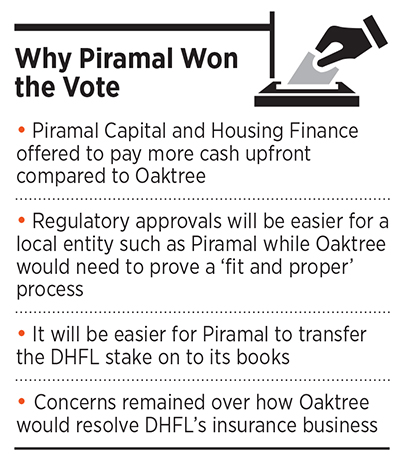 Why are fixed depositors objecting? This third wheel, fixed depositors, is a key which still remains unresolved. According to the CoC, there are 77,489 depositors, of which 70 percent are retail depositors in the bracket of Rs0-2 lakh, and as part of the proposed distribution, this category is being offered 100 percent of the principal amount which means 88 percent of the claim amount. But for other sub-categories, Rs2-5 lakh, Rs 5-10 lakh and Rs 10 lakh and above, it is lower. As per the document accessed by Forbes India, the total fixed depositors claims stands at Rs5,375 crore. Under this resolution proposal, their recovery stands at 23 percent, which is far lower than what banks will recover as term loans (32 percent). Even holders of masala bonds will manage to recover around 32 percent of their capital. DHFL is registered with National Housing Bank (NHB). According to the law firm representing fixed depositors, under section 36A of the National Housing Bank Act, 1987, it is a statutory obligation for DHFL to pay its matured fixed depositors. “The creation of a class-within-class of fixed deposit holders by making complete payment to depositors having deposits below Rs. 2 lakh and only a part to the others, is completely illegal and not in consonance with the law. All deposit holders are entitled to be treated equally by making complete repayment of their deposit, along with interest,” says advocate Vaibhav Guliani, managing partner at Kartavya Legal.  He further adds they will approach adjudication authority and continue to fight till Supreme Court if need be. Is this saga over? More or less. While fixed depositors had filed a case that will come up for hearing on January 20, they are going to file another objection application to the resolution process. Separately, on the deal, all regulatory approvals are now awaited and then Piramal will file for an approval of plan with the NCLT. The final closure is expected to happen over the next three- four months.​