In these times, it is very easy not to be confronted by opinions differing from your own 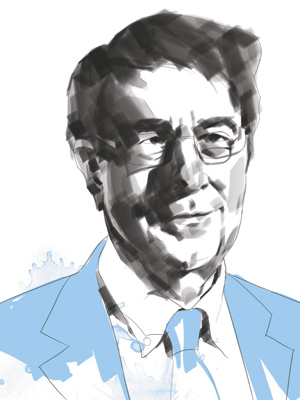 Howard Gardner
The Man: The professor of cognition and education at Harvard Graduate School of Education taught us why IQ is not everything; broadened the focus of the educators, and changed the way children are taught in American schools—even as he introduced the idea of multiple intelligences in the field of psychology. He tells us the meaning of truth, goodness and beauty in an age of twitter.

The Oeuvre: Spans psychology, education and arts; He drove research in learning thinking and creativity through Project Zero; co-founded GoodWork Project to identify and encourage work that’s excellent in quality, socially responsibile and meaningful to its participants.

X-Factor: He is trying to explore the broadest and highest reaches of human thought.

The Message: How do we find truth, beauty and goodness when everything is brief and every assertion is repeated as if it’s true even if there’s no evidence for it? People have to care and I don’t know if there’s any other way of getting people to care than good education.

The Hypothesis
People gravitate towards those who agree with them. Earlier, even if you are looking for people who agreed with you, you couldn’t avoid the ones who disagreed with you. You had to turn the newspaper page, you had to watch the television news, listen to the radio news. But now, it’s easy to find those you agree with and have your own prejudices reinforced.

So What?
It is much better to live in the world when you really
know what’s going on rather than fooling yourself. So the whole idea is to look at yourself honestly, with your eyes wide open, and not squinting to make sure you cut out all the wrinkles and ask other people, ‘do you see what I see in myself?’

Forty or fifty years ago, in the United States, even if people didn’t want to be exposed to the news, they couldn’t help but be exposed. There were only three channels, and if you turned the television on at certain hours, there was the news. And the news was almost identical on the three channels. As far as newspapers were concerned, even if all you were interested in was sports or amusement, you had to open up the front page first to see what was going on.

The mirror effect, the silo effect, is that people tend to go to sites that agree with them and they tend to hear people who agree with them. In previous times, even if you were just looking for people who agreed with you, you couldn’t avoid the ones who disagreed with you. You had to turn the newspaper page, you had to watch the television news, listen to the radio news. But now, it’s too easy just to go the sites you want, with people you agree with and just have your own prejudices reinforced.

I think I’m a pretty good discerner of news because I have fifty or sixty years of experience following through which publications and writers do due diligence and which ones don’t, and everything I read I’m initially sceptical of. But those habits of mind didn’t come cheaply. It came from lots of practice and lots of mistakes that you make, that you eventually correct.

So, I have definite views in education, but I made it a point to read the other publications which disagree with me.

One unfortunate way to overcome the silo effect is to have a crisis. When there is a crisis, people want to know what’s really going on. After 9/11, when people were worried they were going to get blown up, they paid more attention. In Israel people listen to the news very carefully because they’re afraid of having some kind of a crisis. Or it could be nature: A typhoon, a tsunami, an earthquake.

But the other way, that’s longer, but it’s the way I believe in, is it’s much better to live in the world when you really know what’s going on rather than fooling yourself. My most recent book is called Truth, Beauty and Goodness Reframed. It’s about how we think of these classical virtues at a time when the digital media are powerful and can change everything all the time. According to post-modernism, there’s no more belief in any kind of virtue; so there’s no such thing as the truth, it’s just a question of power. A better subtitle for my book would be ‘virtues in the age of truthiness and Twitter.’

How do we find truth, beauty and goodness when everything is brief and when every assertion is repeated as if it is true even if there is no evidence for it? People have to care. And I don’t know of any other ways of getting people to care than a good education and a world where there is a lot at stake. So the whole idea is to look at yourself honestly, with your eyes wide open, and not squinting to make sure you cut out all the wrinkles and ask other people, do you see what I see in myself.

Last June, a magazine published by Harvard asked me what I thought is the most important book students ought to read. I said MK Gandhi’s My Experiments With Truth. Gandhi didn’t fool himself into thinking he was better or more meritorious than others. He was naked in analysing what he did wrong and tried to learn from it. Not all of us can be Gandhi, but we can create a common space where everybody can articulate their concerns, doubts and questions they may have. Everybody living in a complex world faces ethical dilemmas at some point in time. If they don’t realise it, it’s a bad sign. God doesn’t tell you what to do when faced with an ethical dilemma.

I am a very secular person, but I don’t spend a second criticising religion. I am only against those religions that are not tolerant of other religions. Fundamentalism of any kind is something we simply cannot afford these days. But as long as people can believe in whatever they want—and I think for most human beings, it is religion —I’m fine with that. If having a religion helps people be moral, then I’m all in favour of it. But any claim that you need to be religious to be moral and ethical is silly. There is much wisdom in ancient scripts, whether religious or not. But at the same time, you can’t live just by those texts, because there are so many things happening today. For instance, you can’t find out what to do about stem cell research by going through the Bible. It’s not there. You can’t tell about what’s a fair interest rate.

So you convince people by setting models and examples which they admire and hope they’ll be affected by those things.

I would say to people like Steven Pinker and Richard Dawkins and Christopher Hitchens, who think religion is bad, spend less time dumping on people. Instead spend more time talking about what you admire and help people achieve that.

I do take hope from the number of young people doing socially good things. In the US we have many young people working on Wall Street or in management consultancy, but we’ve many, many young people who join Teach for America, which is just like Teach for India. Yesterday, I found a quotation from Gandhi in the newspaper which said that if you want to find yourself, help other people. And that can be a hopeful sign, that a lot of young people are doing things not to enrich their own pocket but to try to help other people. It’s a Gandhian spirit, even a Christian spirit.

The reason I say Gandhi is the most important person in the last thousand years is because I think Christ was at least as important. I don’t think Christ was God; he was an exceptional person. But not enough people have taken the message of Gandhi or Christ as seriously as they merit.(As told to Charles Assisi)

Tweets by @forbesindia
William Bissell: Morality Is Not The Responsibility Of Ceos Alone
Podcast: Be Good Or Be Stupid