For designer Ashiesh Shah, it's aesthetics over labels

Interior designer Ashiesh Shah tends towards imperfect beauty as his preferred aesthetic, and India's A-listers are buying into this approach too 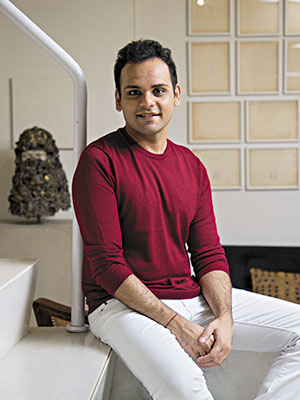 From office spaces and penthouses to concept stores and restaurants, architect and interior designer Ashiesh Shah’s portfolio is extensive and diverse. His aesthetic sensibility has found its way to Hrithik Roshan’s sea-facing apartment and Ranbir Kapoor’s penthouse as well as to filmmaker Abhishek Kapoor’s office, Cecilia Morelli-Parikh’s home and her concept store, Le Mill, actor Jacqueline Fernandez’s residence, and restaurant Nido in Bandra’s upscale Pali Hill area. His approach to design has made him a favourite among A-listers.

He, however, says it’s not about a signature style, but a philosophy of life. “I don’t want to be bracketed as a signature style artist. I prefer evolving with every project, challenging myself with newer concepts every time,” says Shah, 37.

His practice, he says, is rooted in the Japanese philosophy of Wabi-Sabi, which has influenced his vision of space and his choice of materials. The aesthetic is described as beauty that is imperfect, impermanent, and incomplete. “It is a philosophy of life, and once you accept it, everything trickles down to it. I don’t make a special effort to bring it to my practice, but if you look at my spaces, you see that element of finished and unfinished. It is a tightrope you are walking, but you have to maintain that,” he says.

Born into a family of doctors, Shah was initially studying to be a dentist when he realised it was not his calling. Considering his flair for science, he thought architecture would fit the bill since it combined art, technology and creativity. So he enrolled at the Rachana Sansad Academy of Architecture in Mumbai, took a year-long break after the course and studied Interior Architecture at Parsons School of Design in New York. After graduating, he started his career in New York City in the mid-2000s and eventually moved back to Mumbai. 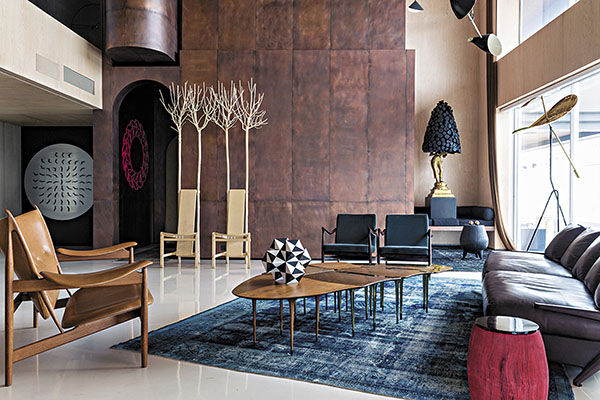 Ashiesh Shah’s signature style comes across in his designs. The sprawling living area seen here has a double height ceiling, a David Weeks light looms over the seating area and a sculpture by Tallur LN is positioned on one side of the copper-clad staircase

After a year-and-a-half stint with Nozer Wadia & Associates, Shah started out on his own. For the last eight years, he has been spearheading his firm Ashiesh Shah Architecture + Design that has worked on various high-end design projects in India and abroad. “I am intrigued by textures and volumes, and love the way natural light plays on different surfaces,” he says.

A lot of his work also seems quite monochromatic. “Yes, you see a lot of monochrome but, you see, the monochrome comes as I am very true to the material, as part of the practice. If I am using the material, be it steel, wood or stone, I generally tend to keep its natural form. By default, the shell becomes monochromatic and then the pattern and texture enhances that,” he says. However, to bring some life in it, he adds colour through loose pieces that are dispensable. “Humans like to evolve with colour and they go through different colour phases, so if you get bored of a red couch, you can move it, or make it black overnight,” he says.

What he follows, according to him, is the ABC formula, where A stands for aesthetics, B for budget, and C for clients. “So once you get your aesthetics right, you should know what your budget is, and then you should know who your client is, and between all of that everything falls into place,” says Shah. He believes design doesn’t happen on the drawing board—it happens anywhere, anytime.

Images: Courtesy Ashiesh Shah Architecture + Design
The interiors of this sea-facing apartment at Marine Drive are inspired by the ocean. The library in the background (on the left) is custom-made. Shah’s sense of aesthetic and love for art are hard to miss with the penthouse being the quintessential example of the old world meeting the new

Working out of an intimate space in Tardeo, Mumbai, Shah and his 12-member team try to infuse some fun into their work. “It is not a life-and-death situation. One wrong tap is not going to kill someone,” he says. Shah encourages his team to try and make mistakes on the drawing board and fix them as they go along. “That’s the way to learn.”

At the same time, there are some things the firm takes quite seriously. Sustainability, for instance. “What material we use and what we abuse is our responsibility.”

Research, too, plays a huge part in their work, even verging on obsession. “Currently, we are obsessed with art deco Chinese carpets; they are outstanding and still available at market prices,” he says. “We are also collecting lace pichwais from 100 years ago. We discovered that when the Germans came to India, they took back this form of art of Krishna Leela paintings, and created lace pichwais in white. I have been collecting a few of them.”

Collecting art is another obsession for Shah who considers his taste eclectic. His keen interest in art often informs, inspires and nourishes his practice and perspective, not to mention the fact that his home is more like an art gallery. “I have been collecting art since I was 14. My latest purchase is a bronze by Mrinalini Mukherjee,” he says.

His sense of aesthetic also shows up in his wardrobe. “I don’t consider myself [stylish]. I even walk out in pyjamas, but I tend to match things. I am anti-brand. Even if I buy brands, I cut out the label. Because I don’t like prompting. I think style should be very individual, very original, very effortless,” he says. Of course, everything comes back to work. “I love fashion as I like to see what’s happening in the world, because sometimes it can influence your design,” says Shah, who was named one of the top 50 interior designers in the country by Architectural Digest for three consecutive years—2014, 2015 and 2016.

Shah believes architecture and interior design in India is still evolving. “We are looking at an industry that is so nascent. Interior design in India did not exist 30-40 years ago. It was for the royalty or the super rich. Today, a middle-class household will also hire the expertise of an interior designer to get the look they want. It’s trickling down and making the industry bigger and bigger,” he says. At the same time, he points out the tendency to ape the West. “There are more Pinterest interior designers and architects. “We still don’t have independent voices. That is on the cusp of happening.”

Keeping his own voice nourished and well-fed has been, for him, a process of trial and error. “All of us go through this artist’s block and writer’s block. That said, we all tend to have a strong sense of bounce-back. I think I know how to get out of it now. Most of the times, it is travel… sometimes we just need to step out of the house and get a change of environment. Sometimes having a bar of chocolate can help… a sugar high can change that mood,” he says with a laugh.