China, led by its megabanks, put big numbers up. So did Korea 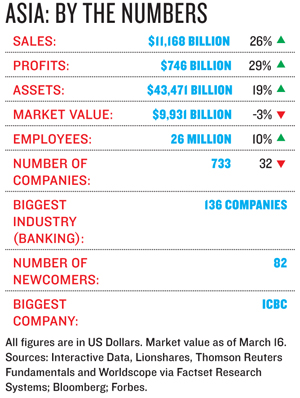 For the fifth year running Asia-Pacific produced the most names on The Global 2000, with 733 firms. This year it also had the biggest net gain in companies of any region, with 32. It’s also the best-performing region in three out of the four metrics (sales, profits and assets) as well as the biggest in aggregate sales. Japan still has more companies (258) than any other Asia-Pacific country. China was second with 136, but they’re worth more: $2.8 trillion in aggregate market value. China was also this year’s top profit centre with $225 billion in profits. Among the biggest and most profitable companies on our list are Chinese banks, including Bank of China, China Construction Bank and ICBC. Korean companies registered impressive 30 percent gains in both sales and profits. 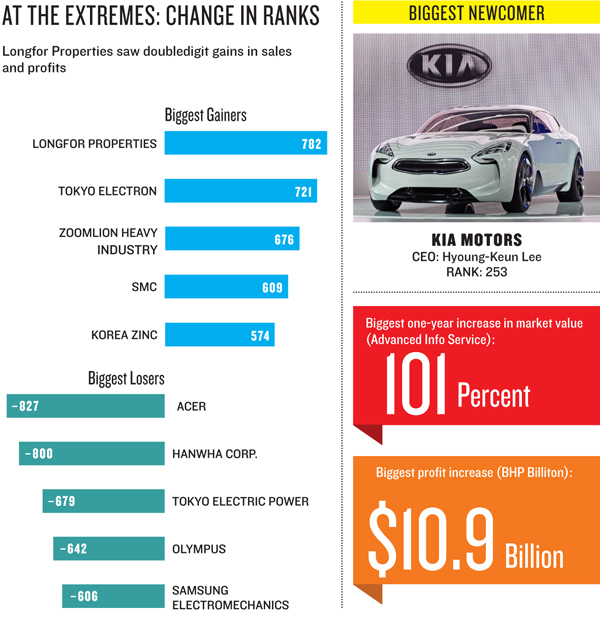 Far East: Rising Powers
Since 2007 China and India, with a combined 119 firms, have added the most companies to our list. China then had the tenth most names on the list. Now it is third. India then was ranked 15. Now it is eighth. The biggest leap up the list for both countries was in 2008. Their companies’ combined market value now makes up a third of Asia- Pacific’s total.

Tweets by @forbes_india
America Back in Shape
On Eating Raw Food