International day of the girl child: What we must remember as we reopen schools

The pandemic has not only undone the progress we made in education, but also in life skills and holistic learning that are especially important for girls

Sohini Bhattacharya is the president and CEO of Breakthrough, a global human rights organisation working to change deep-rooted cultural norms that perpetuate gender-based discrimination and violence. 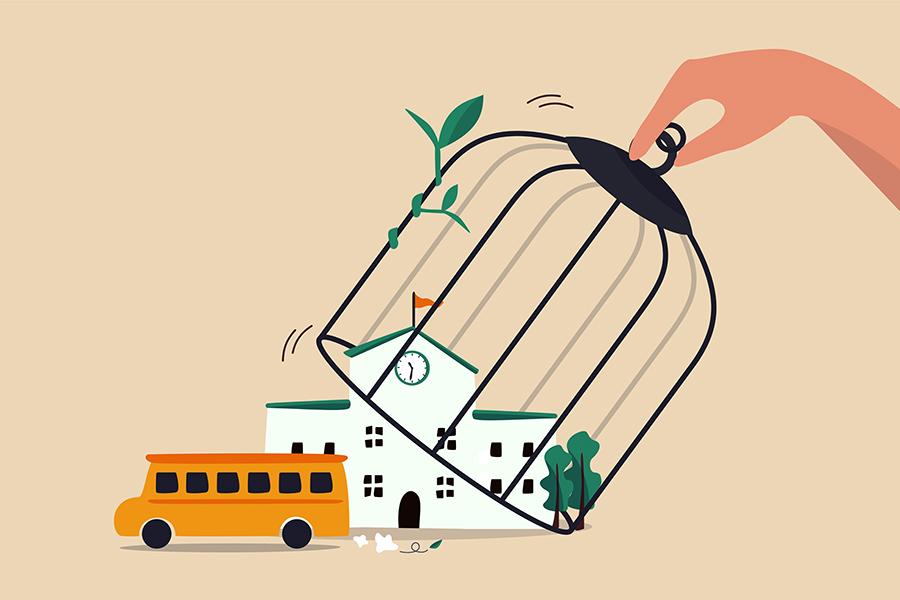 The Oxfam Inequality Report and the Lockedout Report by independent researchers peg that only 8% (rural) and 24% (urban) children had access to online studies. Image: Shutterstock

Girls have often taken bold actions. Take Rabiya’s case whose brother beat her every day during the lockdown in 2020. Since he was the head of the family, their mother chose to remain silent even after she was informed domestic violence was a cognisable offence. Rabiya informed the sarpanch, who summoned her brother and gave him a talking to. At home, even his mother finally spoke up. Although there is an uncomfortable peace at Rabiya’s home, the first step was taken—of saying no to violence and being in charge of their own lives.

Rabiya learned about domestic violence at school, through the Taaron Ki Toli gender equity programme run by Breakthrough, a global human rights organisation. She also learned that she has agency—the right to make her own decisions in life without any fear of retribution. Her mother also learnt about domestic violence during a Kishori Mela that was organised by us in the school, a fete where there were kiosks focusing on many things about adolescents and young adults—health, careers, and a street play on violence and discrimination.

Long school closures have meant that many life skills or holistic development—emotional resilience, wellbeing practices, gender equality—that are taught at government schools are also on pause, for as long as eighteen months. Add to that the absence of peers in their lives—friends who often are the only people they talk to about their lives. For some adolescents in rural India who hardly have conversation with their parents about their lives, this has been a huge black hole.

As schools prepare to reopen, here are some of the things many organisations, especially those working with poor, marginalised students, are focussing on: A consistent back to school campaign—The pandemic has led to the loss of decades worth of improvement that was made various human developmental parameters. Keeping girls in schools doesn’t only ensure learning but also delays underage or early marriages.

You need targeted messaging for communities and gatekeepers to actively engage in supporting girls going back to school. This must focus on the value of girls and the value of education in their lives.

But the task doesn’t end at bringing them back. School management committees and parent-teacher associations will need to monitor that attendance is regular and children are not dropping out. Communities must ensure they prioritise girls’ safety and protection, they must have adequate information and are aware of legal recourses against gender-based violence, early marriage and trafficking to facilitate girls’ return to school.

Overwhelmingly, girls and women also perform the unpaid work of caregiving, for which they are often made to forego education or a career, instances of which increased due to the pandemic.

Integrating social and emotional learning into the curriculum will be key. Adolescents have seen their mental health deteriorate greatly during the pandemic, seeing the loss of their loved ones, financial insecurities of families, disconnect from friends and peers and increased stress at home, sometimes also amounting to violence.

An interesting initiative and an example of a scalable solution is the Happiness Curriculum that was implemented in Delhi’s government schools to release stress, anxiety and depression and promote good mental health practices. Similarly, CorStone’s resilience-based Youth First program is another example of a school-based curricula that seeks to provide skills training to bolster student well-being during and beyond the pandemic. Such initiatives are important in making sure schools reopen with care and schools must figure out how to integrate mental health into the curriculum.

Attempts made to reach students through digital learning in the past 18 months have not always been successful. This is particularly true for youth, especially girls, who were attending government schools and had little to no access to smartphones, tablets or a stable internet connection. Poor families often prioritised sons’ learning and education.

Despite reopening of schools, it will be important for the government to figure out remote learning beyond Covid-19, to close the necessary gaps and make it culturally acceptable for young girls to access phones. Additionally, any safety and violence risks that could be posed by girls’ participation in remote learning must be identified and protective measures incorporated, including digital safeguarding flows in tech platforms.

There has to be concerted effort to make safe remote learning available to the marginalised communities as we cannot afford another lockdown to shut out learning.
Building adolescents’ agency and voice is key to building their leadership skills. We must also hear their opinions on important issues such as climate action and gender equality so that the future of the country is vocal about the changes they want to see.

Lastly, culture and norms need to change. Girls are still not encouraged to take up STEM or pursue jobs in related fields, as a result of which, they take up work with little pay and stability, and continue being in a vicious cycle of inequality.

The writer is a president and CEO of Breakthrough, a global human rights organisation working to change deep-rooted cultural norms that perpetuate gender-based discrimination and violence.

3,089
Thank you for your comment, we value your opinion and the time you took to write to us!