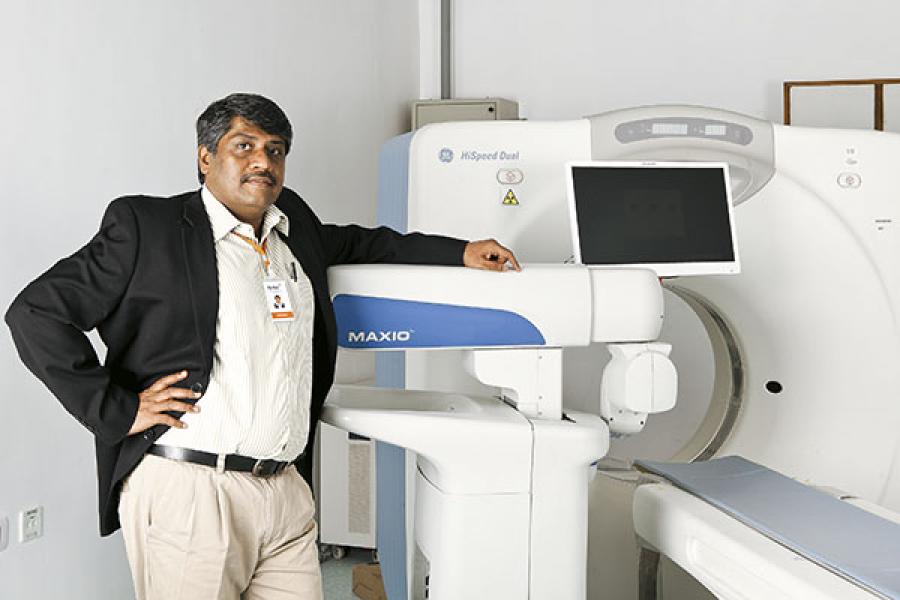 For all practical purposes, Perfint Healthcare can add a middle name: Evangelist. In cancer, where the triad of surgery, chemotherapy and radiation forms a doctor’s arsenal, Perfint introduced robotic diagnostics in India in 2009. With an image-guided system that helps practitioners place the needle on the tumour, Perfint provided, for the first time, options for a 3-dimensional look and treatment of cancerous body parts.

Earlier, such tools were restricted to the brain. In three years, it has moved from providing diagnostic systems like PIGA and ROBIO to offering a complete care system like MAXIO that diagnoses, plans the procedures and delivers drugs to the precise point in the tumour. In the fastest growing field of interventional oncology, it has the world’s largest installed base of 100 targeting devices, 40 being in India. It says it’s on course to more than triple its revenue to Rs 50 crore in 2013, and plans to gross Rs 100 crore in 2014.

The man behind it
“It has been tougher than we had imagined,” says founder and chief executive Nandakumar S, who is one of the four ex-GE professionals, all of whom had a stint in non-healthcare jobs before they came together in 2005 to start an R&D services company. Two years later, it converted into a product company. Perfint faced all the hurdles that a product company faces in India—creating new market, establishing credibility, and most importantly, finding enthusiastic, willing professionals to validate the technology. But as he is shipping MAXIO to global markets and prepares to launch it in the highly regulated US market in November, Nandakumar isn’t complaining.

Why it is a gem
Neither the energy device companies (which provide radiofrequency, microwave, laser or electric energy) nor the large imaging companies (like GE, Siemens and Philips) have focussed on procedure planning; so far they’ve been more interested in ‘placement’. Most imaging companies use CT or MRI which makes the offering expensive. Perfint is one of the early ones to focus both on procedure planning and placement. Cues came from practitioners, it says. Its comprehensive “planning station” is co-developed with experts in over eight countries. In the coming months, Perfint will launch devices that will work with all imaging sources, MRI, CT, ultrasound, PET, etc. It already has a global footprint, with presence in Australia, Japan, Korea, Canada, West Asia, and Latin America among others.

At least 2 million such procedures are performed globally, whose market is estimated to be worth “a few billions of dollars” and growing at over 50 percent. In India, this technology holds much potential as it can be wheeled in a clinic and used for an outpatient procedure, enhancing access to a rapidly growing cancer patient population.

Why it was Hidden
Just about 100 doctors in India practice interventional oncology today. The therapy is restricted to liver, lung and kidney cancer, though it is now spreading to breast and prostate cancer. So, even among speciality treatments, it falls in the category of super specialties which is certainly not a mass market product.

Risks and Challenges
Perfint may not have any direct competition in India and overseas it may compete with a few smaller companies providing solutions that aid interventional oncology, but the med-tech giants will soon catch up. (Or, even acquire it.) “Providing a continuum of care from diagnostic to the therapeutic space is a challenging endeavour,” says Payal Keswarpy, senior scientist at Philips Innovation Campus in Bangalore. Philips has entered this field in the last few years and is focusing on providing solutions, rather than just standalone equipment, she says. On the business side, the cost of entering any market is very high as each region/country has its own regulatory environment. “We’ve pretty much evangelised this [technology] in every market,” says Nandakumar S, who is now raising Rs 100 crore to fund expansion. Though it’s now setting up a development centre in Seattle, getting people with the right skills—clinical understanding coupled with product engineering—is one of the biggest challenges the company faces.

Tweets by @forbesindia
Global Talent Track: By the People
Letter From The Editor: The Real Power of Wealth