2018 W-Power Trailblazers: For many tender-foot startups, Padmaja Ruparel is a guardian angel

The Indian Angel Network pools the wealth of over 500 investors, India's largest network, to catapult the fortunes of budding entrepreneurs 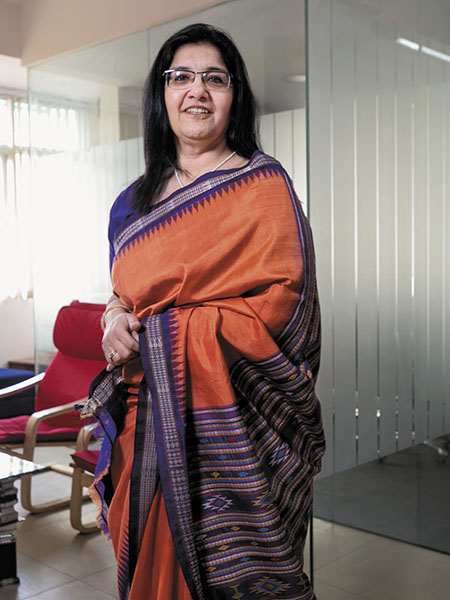 Padmaja Ruparel certainly knows a thing or two about true grit. From building her own real estate business in her 20s to being a housewife to handling corporate communications and corporate social responsibility before becoming an angel investor, the 55-year-old has donned many roles.

But, “nothing is as satisfying” as what she is doing currently. As president of the Indian Angel Network (IAN), one of India’s largest angel funds, Ruparel is busy building a company that wants to fund at least 500 startups that can create over 30,000 jobs in the next ten years.

Ruparel co-founded IAN a little over 10 years ago along with industry veterans such as Raman Roy and Saurabh Srivastava. Today, it boasts over 500 angel investors, has backed 135 startups in 17 countries and has an average internal rate of return of 32 percent. “Our failure rate is [just] 15 percent, which is very low for the startup space,” says Ruparel.

Last year, IAN announced a ₹450-crore fund that will help both early and late stage entrepreneurs by making investments ranging between ₹50 lakh and ₹30 crore. The idea behind the fund, Ruparel says, is that startups often secure seed capital, but find it difficult to navigate through subsequent funding rounds.

The move is in line with IAN’s founding doctrine. “Earlier, the angel investing space was limited to a few clubs. We thought we must change that. And that’s how we set out to build an institution that can leverage geographies,” says Ruparel.

Much before she became one of India’s prominent investors, Ruparel’s entrepreneurial spirit was evident when she developed a 25,000 sq ft commercial space in Kolkata as a 24 year old. “When I got married, I had to leave it all in Kolkata and move to Delhi,” she says.

Once in Delhi, Ruparel worked as a counsellor at a computer training institute before joining a media house. In 1991, she joined the software services company IIS Infotech, at the “bottom rung”—a decision she describes as life-changing. At IIS, she also met Srivastava, her mentor and the co-founder of Nasscom.

Over the next decade, Ruparel went on to become the head of corporate communications of the UK-based Xansa, which had acquired IIS Infotech. Along the way, she also co-founded the Delhi chapter of The Indus Entrepreneurs (TiE), which mentors entrepreneurs and helps them with funding opportunities. In 2006, Ruparel left Xansa to set up IAN.

“Padmaja is confident about her ability to do things,” says Srivastava. “She is never in doubt. She also has the ability to anticipate things and plan them in advance. I don’t think we have seen the best of her as yet and my belief is that she is one of the very few who understands the angel investing space well. She knows every single element of investment.”