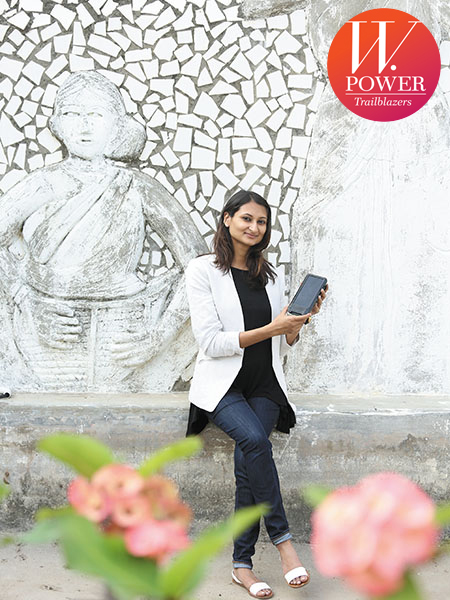 Geethanjali Radhakrishnan narrates the story of a 60-year-old farmer from a remote village in Maharashtra, who caught a skin infection on his leg. The daily wager was on antibiotics for eight years—which cost him ₹1,000 per month—because the local doctors thought it was a bacterial infection. When the sexagenarian farmer was finally told that his leg might need an amputation, he went to a dermatologist in Pune, who told him that it was a fungal infection that could not be treated with antibiotics.

After hearing this farmer’s story, Radhakrishnan, a bioengineer from Shanmugha Arts, Science, Technology & Research Academy in Tamil Nadu’s Thanjavur district, decided to create something that would enable faster diagnoses of skin infections. In December 2015, she set up Adiuvo Diagnostics in Chennai, which manufactures a handheld device called Skin-Scope. It captures multi-spectral images of the infected area, and uses machine-learning to detect and classify the pathogens non-invasively in under 2 minutes, compared to the usual processes that take three to seven days.

“Our device is the only affordable multispectral imaging device compared to other bulky devices that cost more than ₹14 lakh. The concept of using multi-spectral imaging and a completely non-invasive method makes us stand out,” she says. The device also classifies the infecting bacteria, which helps determine the right treatment. Although Radhakrishnan does not disclose the expected price of the device, she says it will be five to seven times less than what is available in the market. Currently, the device is in its beta-testing stage and will soon be launched in rural and urban markets.

So far the company has received a grant of ₹1 crore from organisations such as Biotechnology Industry Research Assistance Council (Birac) and Villgro Innovation Foundation. Last December, Adiuvo has raised an undisclosed amount in a pre-series A round of funding from Menterra Ventures.

Tweets by @forbes_india
Has Apple lost its bite?
RPA is shifting from 'dumb automation' to business value creation: Infosys