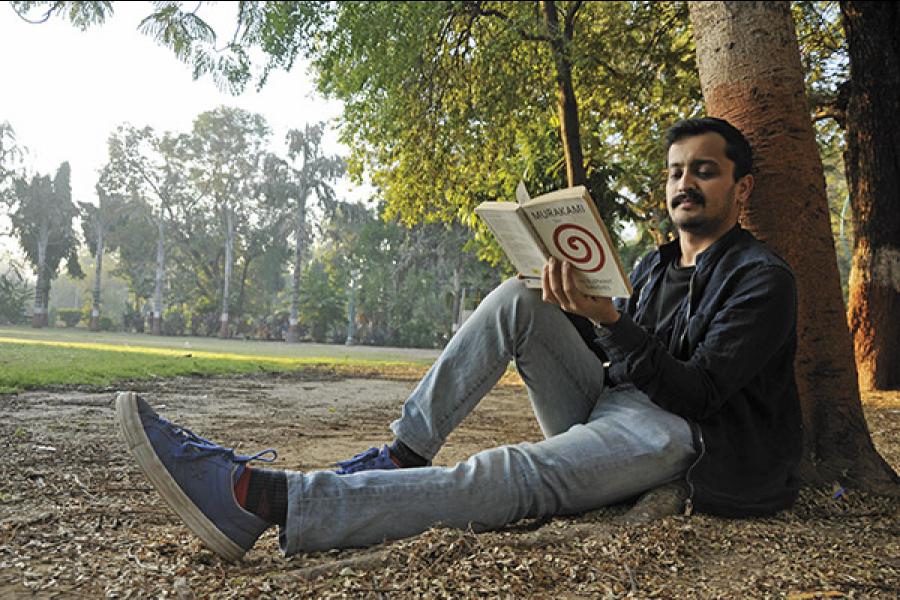 Amshu Chukki loves reading stories. And telling them as well. Just that he chooses artworks, rather than just words, to narrate his tales.

Take, for instance, his work called ‘Mountain Man’. Created while on his residency with Khoj in Pune in 2015, which had taken place in an art deco building, the artwork tells the story of a man who disappeared into the mountain. This site-specific installation transforms the viewer into someone peeping in through a hole in the door of a Victorian bathroom, looking onto mounds of grass in the bathtub.

“I like to work with fiction that originates from spaces,” says Chukki. “Sometimes, when a space has stopped existing, or has changed entirely, it exists only in the minds of people, or in fiction.”

Chukki is exploring newer methods of storytelling through video art. For, even when his work is captured on video, it is not restricted to video itself. It incorporates other elements such as installations, projections, text and time-lapse images. He even uses tools, such as filters on Instagram, to lend a specific feel to his works. “Amshu is one of the most interesting artists I have seen,” says Mortimer Chatterjee, co-founder of Chatterjee & Lal, a Mumbai gallery that now officially represents Chukki. “He has a very wide worldview, which is something rare in someone so young. I would think it has something to do with the world he grew up in.”

A graduate of MS University, Baroda, Chukki studied painting while in college. But video was something that always attracted him, perhaps that is why he was also a member of the college film club. “Video,” he says, “helps me move between different mediums and spaces.”

Chukki’s journey as an artist has taken him to the St Moritz Art Masters Residency Programme in 2014 at St Moritz, Switzerland, and the Darling Foundry, India-Québec Residency in 2015, apart from winning him a host of awards. His art has been exhibited at India: Maximum City at ChesaPlanta, Zuoz, St Moritz Art Masters 2014, in Switzerland, Art for Young Collectors III at Galerie Mirchandani+Steinruecke in Mumbai in 2014, and at Chatterjee & Lal in Mumbai in 2015.