30 Under 30: Ashish Agrawal - The startup whisperer

At 26, Ashish Agrawal helps the startups start up 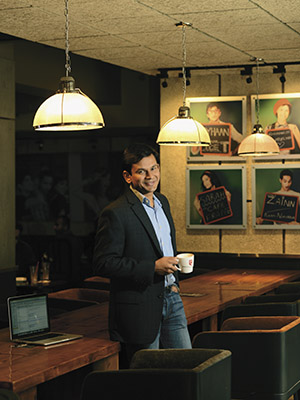 Image: Bmaximage
Ashish Agrawal loves to hang out in a coffee shop, be it for professional meetings or otherwise

Employees from venture capital firm Sequoia Capital have camped twice at Zomato’s offices. First in Delhi, in 2013 before Sequoia made the first of its two investments in the restaurant search and discovery platform; and then in Gurgaon in 2015, when Zomato wanted them to help with research and strategising as it was preparing to launch its online food ordering business.

Ashish Agrawal, who joined Sequoia in February 2013, was part of both the teams. Today, he has progressed from being an analyst at the company to a member of the technology investment advisory team on Sequoia’s investments in Zomato, Ola Cabs, OYO Rooms, Grofers, Go-Jek, Helpchat, Faasos, among others.

Most of the startups that Agrawal has worked with have seen dramatic growth or adapted their business models to changing environments. “In my role, I get to meet hundreds of entrepreneurs every year. I find the journey after we have partnered them far more exciting,” Agrawal says.

Shivathilak Tallam, a senior associate at investment banking firm Sprout Capital Advisors, who has worked with Agrawal, says: “He understands technology, even its underlying trends and has the eye to pick good tech winners.”

Agrawal has always been at home with science and technology. At 15, he travelled to Ukraine to represent India at the International Astronomy Olympiad, and was ranked second. He was also startup-friendly. After studying computer science and engineering from IIT-Kanpur, Agrawal and a few batchmates built a smartphone application called ‘Station Alert’, which allowed train passengers to use their PNR to set location-based alarms instead of time-based ones. Later, they launched ‘Yatayat’, an Ola-type service for auto-rickshaws.

He says 2016 will be spent in “helping entrepreneurs he worked with to build their companies”. And that is the need of the hour in the startup economy.

Tweets by @forbesindia
30 Under 30: Nikhil Kamath - Chess to derivatives, all in a day's work
Wearable technology is the future, and not just for wellness