Harsh Songra's free mobile app for children has been downloaded more than 8,000 times across 100 countries 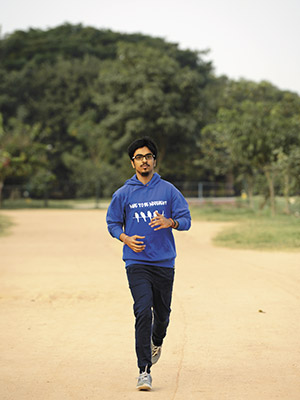 Image: Bmaximage
When he takes a break from coding, Harsh Songra goes for a jog or a long walk

At the age of 11, Harsh Songra was diagnosed with dyspraxia, a neurological disorder that affects motor skills. But that wasn’t a deterrent for him. At 16, he was an expert at coding for Android-based mobile apps. While he credits such skills to an unusual catalyst—“I was frustrated over breaking up with my then-girlfriend. To distract myself, I turned to coding”—he didn’t stick to some run-of-the-mill geeky activities.

Instead, he developed My Child—a free mobile app that could help parents monitor the growth of a child between 11 and 24 months and screen potential neurological, physical and speech disorders. Launched in January 2015, the app, which aspires to be a go-to guide for parenting, has been downloaded more than 8,000 times across 100 countries.

Songra has received seed funding from investors like Pankaj Jain, a partner in Silicon Valley-based venture capital fund 500 Startups, and Pallav Nadhani, co-founder of FusionCharts and a member of the first Forbes India 30 under 30 List. Both Jain and Nadhani concur that Songra is trying to solve a real problem that his family faced. “Even, if he is able to save a small percentage of children from such disorders, that’s a huge impact globally,” says Nadhani. Says Jain: “The future prospects of My Child are significant. There is a global need for detecting possible learning disabilities in children.”

Songra has garnered global support and praise, with a mention on Facebook COO Sheryl Sandberg’s blog last year. He has received technical support and mentorship from Facebook’s FBStart programme.

Songra, who moved from hometown Bhopal to Bengaluru, now has two other co-founders, Aafreen Ansari and Shreya Shrivastava, both 19. “We want to make the app a constant guide for parents by broadening the filter—from pregnancy through childhood,” says Songra, who dropped out of his BCA degree studies last November to focus on the app full-time.

Tweets by @forbesindia
30 Under 30: Yash Bhanage - Serving food that tells a story
30 Under 30: Rahul Narang - The healers' network