Audi TT is a stylish car and fun to drive

When negotiating city traffic is a piece of cake 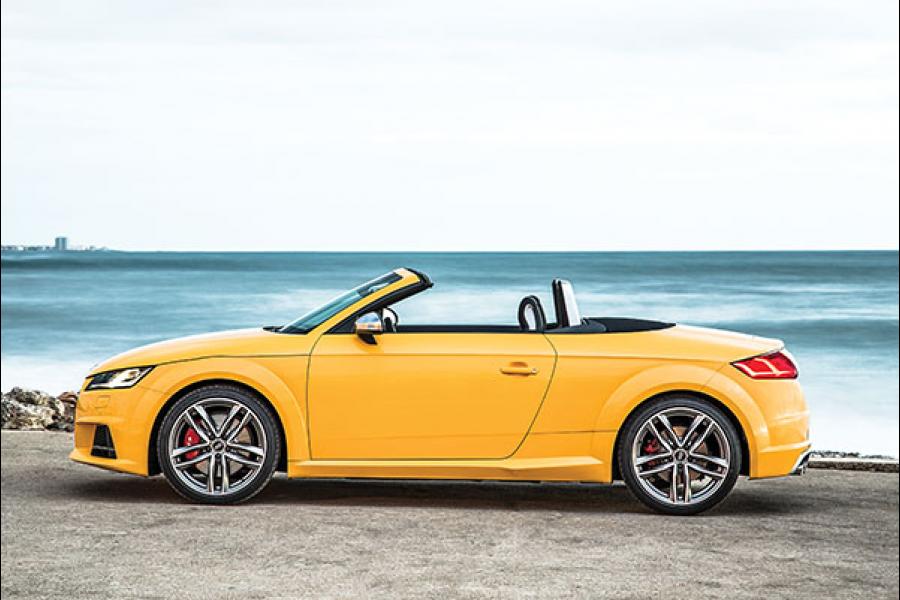 The third generation model TT’s nameplate has been around for more than two decades.

The new roadster now has an edgy design, with a hexagonal grille, sharp headlamps and stylish daytime running LED patterns, similar to the upcoming R8. The Audi four-ring emblem is on the bonnet instead of the grille and the bonnet has signature TT drips to the sides. The brake light strip that runs from one lamp to the other is a nice touch.

The exterior may be an evolutionary design but the interior isn’t. But this isn’t a downer. The 12.3-inch high resolution TFT display is actually the instrument cluster and infotainment screen. So, unlike many Audi and VW Group cars that feature a boring square display, the TT features an uncluttered dash. The driver-centric screen displays a lot of information, including navigation (with Google Maps satellite view). The meters are 3D graphics in analogue style and the TTS even gets an additional racecar-like tachometer.

The lightweight foldable roof is stacked behind the front seats, making it a strict two-seater, unlike the coupe. Boot space is 280 litres with or without the roof stowed away.

There are two engine options: A 2.0-litre TFSI petrol with two different states of tune (230 PS and 310 PS) and a 2.0-litre diesel that is claimed to return 23.2 kmpl. The engine has been borrowed from the coupe and is a new generation unit. It is mated to a 6-speed manual or S tronic dual-clutch gearbox. India will only get the automatic variant. The TT claims to reach 0-100 kmph in 5.6 seconds while the TTS does the same in 4.9. The TTS is quicker, but the less powerful TT TFSI Quattro is better suited for everyday driving.

The TT is now slightly smaller but the wheelbase has increased. The car holds its line well, especially around hairpin bends. An all-wheel drive system distributes power between the front and rear axles. But it can understeer a bit, especially in corners.

It is ideal for those looking for a powerful and stylish open-topped car, which is fun to drive and still very usable for everyday urban driving.

(This story appears in the 12 June, 2015 issue of Forbes India. You can buy our tablet version from Magzter.com. To visit our Archives, click here.)

Tweets by @forbes_india
Bet you didn't know this about Marilyn Monroe
We have done a lot of internal strengthening in the last year: Arundhati Bhattacharya