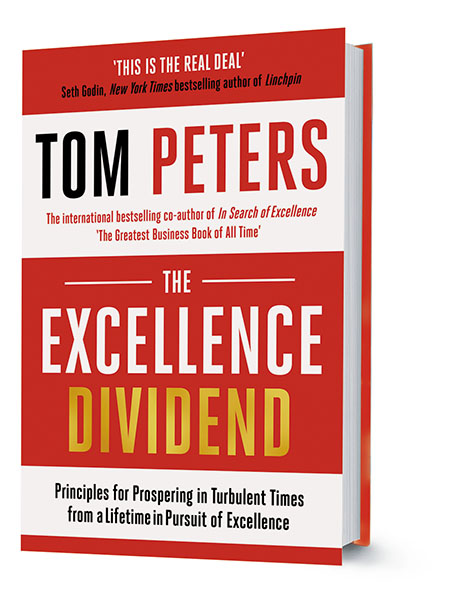 We are what we repeatedly do. Excellence, then, is not an act, it’s a habit,” said Aristotle. And in his book, The Excellence Dividend, Tom Peters says the habit of management excellence is the way to face ongoing technological disruption and massive job losses.

Peters admits his bias in promoting big companies for 36 years—his first book, In Search of Excellence, touted eight lessons from large, successful firms that made US companies as competitive as the Japanese.

But now, in a U-turn, he says big firms have lost their sparkle and, rather than innovate and create jobs, they lose jobs because of poorly thought-out plans or mergers dictating cost-cuts and layoffs. Innovations that lead to the creation of jobs are being done by small firms, and the book is about lessons from these small and medium enterprises (SMEs).

One such company is Buc-ee’s, a chain of Texas convenience and petrol stations, the biggest of which, at 68,000 square feet, has 120 fuelling spots and 83 toilets.

In 2012, it won America’s Best Restroom contest—its highway billboard reads, “Restrooms So Clean, We Leave Mints on the Urinals.”

Millions of such businesses exist across the US, employing only eight to 10 people or even less, which, despite low wages, deliver personalised best-quality customer service through employees who are well-looked-after.

Considered decisions to expand or hire ensure zero layoffs. These SMEs are irreplaceable by machines, while excellence ensures survival.

This people-first strategy has proved profitable for other low-wage companies like Publix, Whole Foods, Wegmans, Nordstrom and Marriott, all of whom figure in Fortune’s list of 100 best companies to work for in the US between 1998 and 2014.

These retail or hotel companies necessarily employ many part-timers—Publix has 100,000—all of whom are given health care benefits too. Another successful retailer, Costco, offers a 40 percent higher hourly wage compared to nearest competitor, Sam’s Club.

A recent review in The Economist, of Jeffrey Pfeffer’s  Dying for a Paycheck, quotes the book’s examples of how poor health care as well as job insecurity are shortening lives, and proposes that the solution may lie in corporates stepping up and changing their behaviour. Pfeffer gives the example of insurance company Aetna, and technology suppliers Barry-Wehmiller which have introduced a higher minimum wage as well as wellness programmes without impacting their profit.

If Peters’s management principles of successful SMEs are not as well-crafted as his principles about big firms, it is because the management structures of SMEs have not evolved as much as large companies yet.

In this context, Peters has some general propositions, namely that, armed with technology and artificial intelligence, people-focussed SMEs will be better positioned to serve customer needs.

Interestingly, Northwestern University in the American state of Illinois, offers a course called ‘Leadership through marketing’, which argues that the digital revolution has made the customer powerful, but traditional organisational structures are slow to respond to the challenge. Logically, then, Peters’s SMEs would be better positioned to do this.

After an illustrious run as a management guru, Peters doesn’t seem to have all the answers anymore; but, it seems, nobody does.

What Peters does have is an exhaustive reading list at the end of most topics or chapters, upending the saying “What you don’t know won’t hurt you.”

The book is clearly a labour of love, with the intention of empowering managers in a disrupted world, through this distillation of a 4,094-slide power-point spanning 50 years’ work.

Tweets by @forbesindia
We need to ensure inclusion of LGBT community in companies: Keshav Suri
Ten interesting things we read this week