Group buying Web sites are the latest online rage. Will they survive? 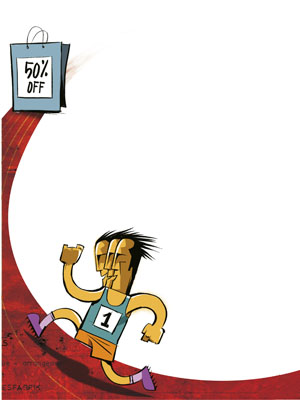 When Jose Kumar wanted to advertise his new business, the Bangalore-based operator of a cold storage store could have chosen a local newspaper, dropped flyers or gone on a local radio station. Instead, he chose group buying site Taggle.com that itself had launched barely a month and a half ago.

Group buying is a transaction where consumers come together to take advantage of a discount that is offered only if a minimum number of buyers (usually 10 to 15) agree to buy that item.

The deal was simple: Buy a voucher worth Rs. 250 and use that to purchase Rs. 500 worth of products from Cold Cargo, his direct-to-home cold delivery chain. Taggle.com sold 600 vouchers in a day and Kumar got new customers. He also noticed that as many as 20,000 people clicked on his site to find out what it was all about. He says it’s unlikely that would have happened through a newspaper advert.

In the span of a year, group buying has caught the fancy of several start-ups across the country. “Institutional selling has always been big in this country. Now we’ve taken that online,” says John Kuruvilla, chief executive officer of Taggle. Taggle has already received its first round of $8.75 million funding from Battery Ventures and Greylock Partners.

Spurred by the success of Groupon, America’s largest group buying site, companies like Mydala, Koovs and Taggle have rushed to sew up merchant deals and attract a loyal following. Add to that low entry barriers — all you need is server space and a marketing team that often works on incentives — and there are new entrants almost every month. The sites make money by charging between 20 and 30 percent commission on the cost of the deal sold.

Merchants acknowledge that it is a fine balancing act between making your brand better known and being seen as a discount offering. Saurabh Chopra who runs The Sweet Tooth Company, a confectionery shop says he would not advertise on these sites more than twice a year.

But group buying Web sites are up against formidable challenges. At 6.9 percent or 81 million people, Internet penetration remains low. Add to that, people are often chary of using their credit cards online. Increased competition has resulted in sites lowering their marketing fee. Commissions have been driven down due to newer entrants. Also the number of deals sold remains low. Koovs, which is present in Delhi, Mumbai and Bangalore, manages to do 100 deals a day in each city.

“While it’s still early days for group buying in India rapidly scaling up user numbers will be the key to success,” says to Arvin Babu, partner at Greylock Partners, a venture capital firm that has invested in Taggle.  “Building sustainable value for the merchant is the key, he adds.

For now Koovs is the only site that claims it has broken even. It launched operations in Singapore, and Thailand and Indonesia are on track to start in October. “Unless I have a hundred deals in that city I don’t start operations,” says Kanishk Shulka, chief executive of Koovs.  For others the journey proved short lived. In June, Wanamo was acquired by Dealsandyou while Grabon sold out to Snapdeals.

Tweets by @forbesindia
Embracing Ambiguity: Making Judgment Calls When The Future Is Hazy
The Minds that Listen