We all know of the Taj Mahal. But here are some more extravagant gifts. Love may have been just an excuse 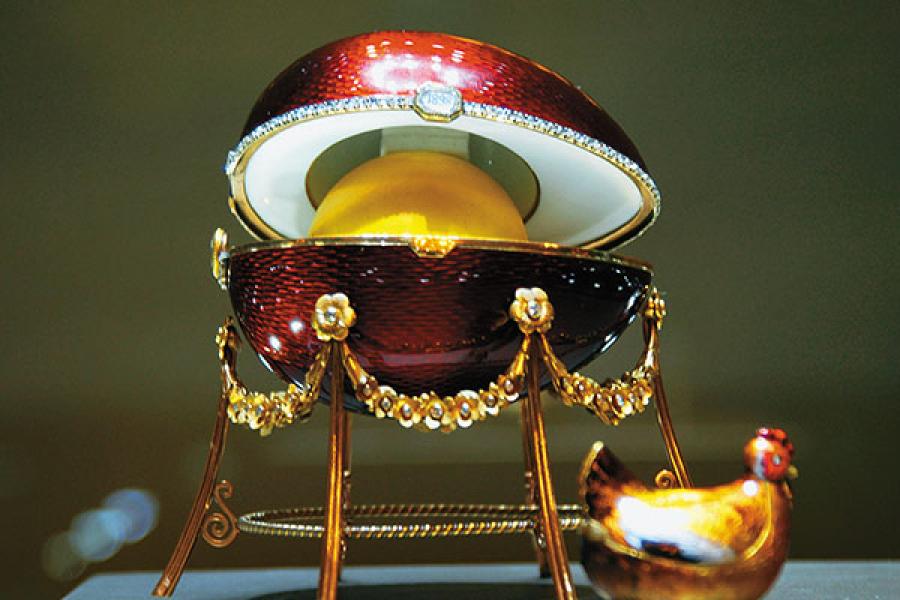 Fabergé eggs
The first of the opulent Fabergé Imperial Eggs was made for Tsar Alexander III, as a gift for his wife Empress Marie Fedorovna in 1885. The Hen Egg opened up in layers to reveal delightful surprises. The tsar gave a Fabergé egg to his wife every year, a tradition continued by his son Nicholas II. Of the 50 Fabergé eggs made, the most expensive was the 1913 Winter Egg (worth $9.6 million in 2002).

The Orlov Diamond
Russian empress Catherine the Great and her lover Count Grigory Orlov lavished gifts on each other. While Catherine gifted Orlov a palace in Gatchina, Orlov gave her a diamond, the size of half a chicken’s egg. The Orlov Diamond, around 189.62 carats, adorns the Russian imperial scepter. A legend traces the diamond to Sriranganathaswamy temple in Tamil Nadu.

A Bengal Tiger
The Russell Brand-Katy Perry marriage did not last. But the pair, who had an exotic India wedding at the Ranthambore National Park, ensured a bit of the joy lasted longer than their vows. Brand gifted Perry a Bengal tigress, called Machli. The tigress, of course, continues to reside where she always had, in Ranthambore, and is looked after by the money Brand had paid for her.

Alberto Giacometti Sculpture
Regardless of the fortunes of his English Premier League football club Chelsea, owner Roman Abramovich, a Russian business tycoon, bought his girlfriend Daria Zhukova an Alberto Giacometti sculpture for $14 million in 2008. ‘Femme de Venise’ is a bronze sculpture cast by the Swiss artist in 1958.

The Taylor-Burton Diamond
In 1969, Hollywood actor Richard Burton bought his wife Elizabeth Taylor a 69.4 carat pear-shaped diamond for $1.1 million from Cartier. The diamond was put on display at Cartier’s New York and Chicago stores, and thousands queued up every day to see it. Insurer Llyod’s had Taylor guarded by men with machine guns while wearing the stone.