Lok Sabha Gets a Last-Mile Boost from UPA

When the monsoon session started on August 5, the government had hoped to pass 43 bills over the 16 sittings available. It also proposed to introduce 25 new legislations. But it was, inevitably, a sluggish session that got saved in the last lap when the Lok Sabha worked extended hours to pass the food security bill and the long pending land acquisition bill. 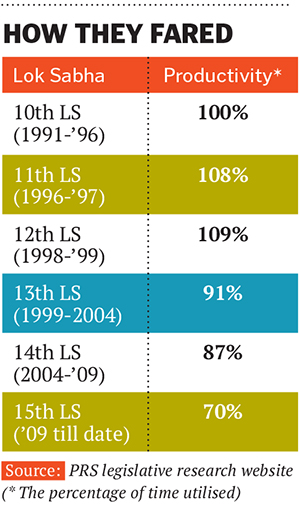 In the process, its productivity during this session went up to 47 percent from 22 percent until August 25.  The two bills have salvaged a session that was off the mark, even by the low standards that the 15th Lok Sabha has set. For instance, it used only 49 percent of its time during this year’s budget session.

The Rajya Sabha fared much better, utilising 77 percent of its time.

Taken together, Parliament could pass only two bills: The Companies Bill, 2011, and The National Highways Authority of India (Amendment) Bill, 2012.

Tweets by @forbesindia
Harnessing Big Data? Get a Policy First
How Avendus Stayed Ahead of the Market