The Fabulous and the Innovative

Disruptors will lead the way in today's fast-changing business environment

In the universe of companies, there are those that follow the tried-and-tested path towards acquiring scale, growth and profitability. And then there are some that have dared to be different, taken bets and stood by them, and created enormous value in the process. Forbes Asia’s annual listing of the Fabulous 50 companies is made up of such corporate stars in the Asia-Pacific region. Drawn from a pool of over 1,500 public companies with annual revenues of at least $1.7 billion, these companies are measured against several parameters—profitability, shareholding pattern, debt ratio and many more—before the final 50 ‘fabulous’ companies are arrived at. This year’s Fab 50 list sees a sparkling debut, that of Alibaba. With the highest market value ($242.5 billion), and outperforming the rest on many other parameters as well, Alibaba comes in after being publicly listed for at least a year. China contributes the highest number of companies (22), but is down three since 2015. 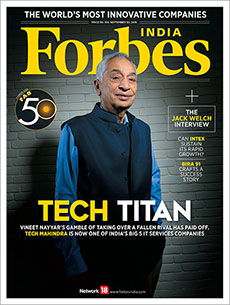 The Indian contingent in the Fab 50—the second largest—is also down by two since last year, with eight companies making the cut. Among them is Tech Mahindra, which, till a few years ago, wasn’t high up in the pecking order of Indian IT players. However, as our cover story will tell you, Vineet Nayyar’s bold bet of taking over troubled rival Satyam Computer has proved to be that one move that successfully changed the game for the Mahindra Group IT major. Today, Tech Mahindra is the fifth-largest IT services company in India, clocking $4.05 billion in revenues and $477 million in net profit as of March 31, 2016. More importantly, this year, it’s the only Indian IT firm on the list. Nayyar spells out what makes the company tick when he says: “In our business, the work isn’t done until the customer is fully satisfied.” This year, three Indian companies—Bajaj Finserv, IndusInd Bank and Eicher Motors—debut on the Fab 50.

In this issue, we also bring you the Forbes list of the World’s Most Innovative Companies. This ranking, based on the concept of ‘Innovation Premium’—the additional value investors place on a company above its enterprise value—celebrates creative disruption, and places automobile major Tesla Motors at the top of the heap, and application software company Salesforce in second place. Five Indian companies feature in this list, with paint maker Asian Paints being the highest-ranked (18) Indian firm; the others are Hindustan Unilever (31), Tata Consultancy Services (66), Sun Pharma (73) and Larsen & Toubro (89). What both these lists will tell you is that in today’s fast-changing world, disruption is a key ingredient to succeeding in the marketplace. Companies that do more of the same will soon find themselves irrelevant. Corporate history has many such examples.