Members of Hong Kong's Lo clan can be involved in its property-and-hotel flagship, Great Eagle, work independently, or both


At first, Ka Shui (KS) Lo didn’t think he’d end up in the family business. One of nine children of Hong Kong real estate mogul Lo Ying-shek, he went to medical school in the US, married a fellow physician and worked as a cardiology researcher in Michigan. But a call from his father in 1980 to help during a rough patch in the property market turned him into an entrepreneur. Learning from his days in medicine, he moved the company into hotels and bolder real estate deals. “I’m a student of genetics and evolution, and I believe that you have to evolve,” he says.

Great Eagle—the family’s flagship, led by 68-year-old KS—is evolving more than ever as startups such as Airbnb shake up the hotel industry. It’s opening Langham luxury hotels—that it owns instead of just managing—in new markets abroad and setting up a new hotel-management brand, Cordis, to tap into China’s travel boom. It has launched a US real estate investment fund with a Chinese government-owned bank at a time when mainland businesses are looking to grow overseas.

But the Lo family fortune—which Forbes Asia estimates at $3 billion—is built on far more than Great Eagle. KS’s younger brother Vincent, 67, started Shui On Land in the 1970s and is best known for developing Shanghai’s Xintiandi nightlife district. He’s adjusting his strategy, too, selling office buildings to reduce debt and raise funds for new purchases, focusing on property management and scouting for partners. He’s also taken on a high-visibility role at the government-backed Hong Kong Trade Development Council. The second-oldest son, Yuk Sui, 70, an architect who ran Great Eagle with his father for a time, parted ways in the 1980s and went on to lead Regal Hotels International Holdings and his main holding company, Century City International Holdings. The youngest brother, Kai Shui, 55, is the largest shareholder in SFK Construction Holdings, which is looking to go public this year.

These underscore their father’s belief that family members should be able to stand on their own. “We were brought up to be fairly independent, so we all do our own thing,” Vincent says.

That has continued since Ying-shek died in 2006. Family members do sometimes collaborate. In the past two years, Great Eagle has teamed up with Shui On, buying hotels in Vincent’s developments in Shanghai. With KS presiding, six Lo siblings and their mother—co-founder Lo To Lee Kwan, 95—sit on the board. Family members who wish to work at the company are welcome to join but must prove themselves. “I’m a big believer in family business,” KS says—because it allows for longer-term investment. The extended clan, including Yuk Sui’s family, gets together regularly on weekends and especially on important holidays. 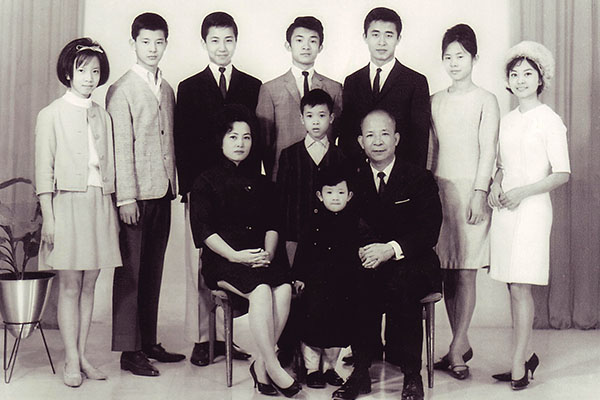 This family portrait was taken around 1964. Great Eagle co-founders Lo To Lee Kwan, still a director, and her husband, Lo Ying-shek, who died in 2006, are in front with their youngest, Kai Shui. Back row: Vincent and KS are second and third from left

The Lo approach to family affairs is somewhat unusual among Hong Kong businesses and has been “quite successful”, says Roger King, who runs a centre that studies Asian family businesses at the Hong Kong University of Science & Technology. Even business magnate Li Ka-shing seems to be trying the Lo model, leaving his eldest son, Victor, to run his core business while helping younger Richard work independently, he adds.

Born in Guangdong Province in 1913, Ying-shek moved to Thailand in his youth to help with the family textile trade. He arrived in Hong Kong in the 1930s, survived World War II and entered the property business in the 1950s. Opened in 1983, his landmark project, the 35-story Great Eagle Centre in Wanchai, is where the company is now headquartered. Vincent built the Shui On Centre nearby.

The 1980s were difficult for the family as Hong Kong was coming to grips with its imminent return to mainland rule, hurting the commercial real estate market. Vincent delisted Shui On and then relisted it after shedding noncore businesses. KS, back from his medical job in the US, worked with his father to stabilise Great Eagle. He went on to buy the Citibank Tower site in Hong Kong for a bargain price after the Tiananmen Square crackdown and followed up over the years with purchases of several hotels at market lows. To generate capital, Great Eagle launched a REIT in 2006 and later took some of its Langham hotels public in Hong Kong. Langham, which has 21 luxury properties, agreed in July to pay $178 million for land in downtown Tokyo.

What’s ahead? KS has been watching hotel prices rise globally, meaning that a key to his success in recent years—buying low—is going to be harder. But he sees China’s overseas travel boom fuelling new business. In China, he expects to open as many as 20 Cordis five-stars a year under management contracts. As for Vincent’s Shui On, it’s raising cash at a good time because there’s an oversupply of commercial properties in China that he can buy on the cheap. “A lot of projects will not do well, and that will be a good time for us to pick up some bargains,” he says. And Yuk Sui’s Century City sees opportunities in China in hotels, outbound travel, cultural tourism and children’s “edutainment” as incomes rise, notes Poman Lo, his daughter and a vice chairman.

The rise of Poman and brother Jimmy, the other vice chairman, underscores the rise of the third generation. At Great Eagle, KS’s daughter Katherine helps oversee the hotel business while son Alexander is a senior executive handling investments and project development. At Shui On, Vincent’s daughter, Stephanie, is coaxing more business out of Xintiandi. They all carry genes that have proved to be adaptable; they’ll need them for the next generation of challenges.