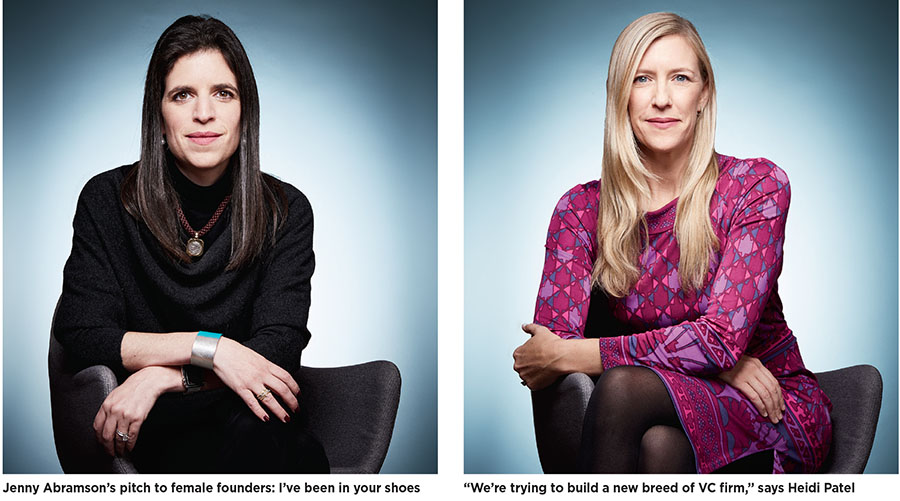 Venture capitalist Jenny Abramson is holding her once-a-month open office hours at Hera Hub, a women’s co-working space in Washington, DC. She deftly jots notes with a stylus on an iPad while maintaining eye contact as Kimberly Linson tells her about Leaderally, a new professional learning site for teachers.

Linson, 46, is clutching a Dream/Believe/Achieve notebook and understandably seems a tad nervous about the site’s planned January beta launch. She and her two female co-founders quit their management jobs at a tutoring company to take the entrepreneurial plunge.

After peppering Linson with questions, Abramson declares herself “thrilled” with the Leaderally concept but suggests the women market initially to charter school teachers, who typically have less experience and more flexibility to adopt new methods than their public school counterparts.

Abramson knows this space; she serves on the board of DC Prep, a high-performing local charter, and worked in programme strategy at Teach for America between studying genomics as a Fulbright scholar at the London School of Economics and earning her Harvard MBA.
“The oracle has spoken!” declares a grateful Linson, as she makes way for the next mentee.

Abramson, 40, is founder and managing partner of Rethink Impact, which in March closed on a $112 million fund investing in women-led, tech-driven startups with social impact. That might not sound like a lot, but it’s the biggest VC pot in the US dedicated to female founders. Just 8 percent of partners at the 100 largest US venture firms are female, and 58 of those firms have no women partners at all, CrunchBase reports. Moreover, companies founded solely by women have snagged just 4.4 percent of VC deals—and less than 2 percent of VC dollars—since the start of 2016, according to data compiled by Pitchbook.

The investment case for Rethink Impact is compelling: If worthy women-led startups have a harder time getting funded, then investors ready to give them a fair shot can pick from the best and capture extra returns. Indeed, when First Round Capital reviewed the 300 early-stage investments it made between 2005 and 2015, it found those with at least one female founder had performed 63 percent better than companies with all-male teams. Sure, that’s just one VC firm’s results. But other studies also suggest there’s good money to be made backing women.

Abramson has a less mercenary goal too: “Building an ecosystem” for female entrepreneurs. Last summer, as sexual harassment claims rocked Silicon Valley, she and her West Coast partner, Heidi Patel, issued a pointed invitation to women: “You have kids or lots of other responsibilities? We see that as a positive. You can balance a million things at once. Your office doesn’t have a Ping-Pong table in it? That’s okay, ours doesn’t either. Worried we are going to hit on you? Don’t. We’ve both been in your shoes. We know. Your job is hard enough already, and we want to help.”

So far, the two partners and their associates have met with or had phone and email exchanges with 700 female founders. They aim to connect with 2,500 to 3,000 companies during the life of the fund, even though Rethink Impact will invest in just 25 to 30.

“We’re trying to build a new breed of VC firm,’’ says Patel, a 42-year-old Stanford MBA who has spent most of her career in impact investing. “Our industry has been in the headlines for all the wrong things lately. We have the opportunity to level the playing field in a way no one else is really doing now.”

Abramson isn’t alone in smelling opportunity. In October, the Wharton Social Impact Initiative reported that 47 US funds that invest with a “gender lens” have raised $1.1 billion, most of it in the past few years.

Another prominent investor is Jennifer Frist of the billionaire Frist family of Tennessee. She met Abramson at a Nashville luncheon for 30 potential investors sponsored by UBS Wealth Management, which chose Rethink Impact as the first private impact fund it offered to US clients. There’s a good reason for that. John Amore, who heads UBS’ impact-investing strategies for the US, notes that women, along with Millennials, are most likely to demand their investments do more than just make money.

“I like helping other women, and I like businesses that make a difference,” says Frist, who invested $1 million in Rethink Impact, including $250,000 each on behalf of her two daughters, ages 12 and 15.

Talk about power networking. Frist brought a guest to the UBS luncheon: Jessica Harthcock, the 31-year-old founder and CEO of Utilize Health, which coordinates rehabilitative care for patients who have suffered strokes and other neurological injuries. Frist became her lead angel investor after judging a Steve Case Rise of the Rest competition in Nashville, where Harthcock pitched but didn’t win. Now Harthcock and Abramson are keeping in touch; while Rethink Impact mentors at the angel and seed stage, it typically invests in Series A or later rounds.

“ Our industry has been in the headlines for the wrong things lately. We have the opportunity to level the playing field.”

So far, Rethink Impact has put money into 14 ­companies, including Neurotrack, which offers online screening for cognitive decline to worried Baby Boomers, ­Change.org, the e-petition site, and Werk, an online platform for finding flexible professional and management jobs. In August, it led a $34.6 million round for Ellevest, a robo-investing site for women, and Abramson joined its board.

There’s a bittersweet aspect to Abramson’s efforts. Two decades ago, her mother, Patty Abramson, raised $50 million for a Washington, DC-based venture firm dedicated to backing women. She even posed holding a cigar on the cover of a local tech magazine with the tag line “Welcome to the Club”. But after the 2000 dotcom crash, Patty Abramson returned the money to investors, exiting without an overall net loss or gain.

Daughter Jenny didn’t start her work life intending to pick up her mom’s mantle. After earning her MBA, she spent eight years as an executive at the Washington Post Co. It wasn’t until 2013, when she became CEO of startup LiveSafe—which sells an app to crowdsource safety information from mobile phone users—that Abramson fully appreciated how little progress women had made, funding-wise, since her mother’s aborted fund.  In 2015, Abramson partnered with the Seavest Group to launch Rethink Impact.

“There is momentum,’’ she says. Then she hesitates and, in a nod to her mother, adds: “Some people thought there was momentum 20 years ago. What’s exciting is our size. It might be a sign that there really is change coming [this time].”

Tweets by @forbesindia
In the name of the son: Donald Trump Jr's India plans
Cracks in the concrete: These charts capture the realty slowdown in major cities